As time goes by I get less and less surprised why I was such a passionate reader of Grimms’ Fairy Tales. I had an elder brother, who was wise, clever and knew how to handle anything, reinforcing my belief that I was stupid and couldn’t understand or learn anything. In a way he was right: I still haven’t mastered the art of not biting off more than I can chew, so when Longborough Festival Opera, after two years of pandemic-related restrictions, decided to enter the new season at full steam, I immediately set off for the Cotswolds hills. You keep coming back to your spiritual homeland despite adversities, and there were quite a few of them, given that I decided to see a performance of Siegfried precisely during the celebrations of Queen Elizabeth II’ Platinum Jubilee, which coincided with a half-term break at British schools. But simpletons from fairy tales and passionate music critics get everything right in the end. I managed to get hold of the last plane ticket, miraculously book a room in my favourite B&B and found myself again, like always, to a town from an eighteenth-century couplet, “where men are fools and women are bold, and many a wicked tale is told” – a few kilometres from a village which was once jokingly said to be aspiring to be the English Bayreuth, and which is now increasingly being hailed as a place headed by the most eminent, albeit invariably modest, Richard Wagner specialist in the world.

The plan was for LFO’s new staging of the Ring, conducted by Anthony Negus and directed by Amy Lane, to have its great finale next year. The pandemic has postponed it for at least a year, not to mention the fact that last year’s Die Walküre was presented with much reduced forces, in a semi-staged version, without overseas visitors, held back by the long quarantine in force in Britain at the time. I wrote about Das Rheingold six months before the outbreak of the pandemic and about Die Walküre – on the basis of a streamed performance generously made available by the management of Longborough Festival Opera. I went to see Siegried with hope, but, at the same time, with my head full of doubts: I make no secret of the fact that I still consider the third part of Wagner’s tetralogy to be its weakest link, inferior in both dramatic compactness and coherence of musical vision to the other three parts of the Ring: the brilliant reinterpretation of satyr drama in Das Rheingold, the movingly human tragedy of Die Walküre and the sumptuous grand opéra-like concept of the final Götterdämmerung. What seems to be the most problematic element of Siegfried is the eponymous protagonist, a herald of a new model of humanity, a hero from nowhere, a naive simpleton, a stupid “younger one”, who seems to embody the idea of freedom above all in his blessed incomprehension of the mechanisms governing the modern world. Wagner – at least on the surface – made a mistake in constructing this character, putting to the fore his naive, primal “fearlessness”, which, in the hands of most conductors interpreting Siegfried, leads to the highlighting of the already blatant disproportion between Siegmund’s son, raised in the forest, and Wotan’s cursed daughter Brünnhilde – poignantly “human”, compassionate and capable of true love. 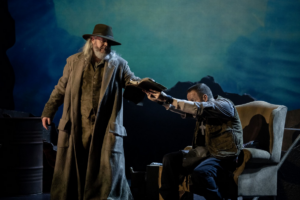 Yet, as I have already mentioned, these are just appearances, resulting from the now common tendency to elevate the character of Siegfried and to seek in him a model for Walther and Parsifal – characters who acquire charisma and refinement in the course of the narrative in order to triumph in the finale as heralds of a new order. When it comes to Siegfried, the matter is much more complicated and, at the same time, tragic. This herald of inevitable change will never mature, will never – or perhaps will, shortly before his death in Götterdämmerung – become sufficiently self-aware to change anything in this world. In order to present Siegfried’s story persuasively, without trying to cover up his inherent traits – thoughtlessness, ingratitude and obtuse cruelty – one has to believe this fairy tale. Like a modern child or a nineteenth-century reader of Brothers Grimm’s tales, thinking in terms completely different from those used today, absorbed by the story of Kaspar Hauser, which reverberated throughout Europe, a mystery of his day and, at the same time, an embodiment of longing for Rousseau’s utopia of the natural man.

Negus does believe in that fairy tale, of which more in a moment. The matter is not as straightforward with Amy Lane, who – after an ambivalent reception of her Rheingold – seems to be plunging deeper and deeper into “homemade” theatre, as if not quite trusting that the audience at a Gloucestershire countryside opera house would be capable to follow, without detailed explanations, a bold metaphor. At Longborough the singers move within a confined space, which is governed by rules quite different from those of the large, state-of-the-art stages of Cardiff or London. The unnecessary accumulation of props (set designs by Rhiannon Newman Brown) works against the narrative in this case, not only distracting from what is essential in the score, but also – unintentionally – focusing the audience’s gaze on coarse details that would go unnoticed on a larger stage. Paradoxically, the further into the work, the purer the staging got, the clearer the projections (bringing to mind vague but probably correct associations with the Ossianic landscapes from Gottfried Keller’s 1845 Green Henry, an autobiographical novel of a failed painter who had problems with distinguishing between reality and his own ideas), and the darker the finale, which only in the last scene shone with the illusory light of fulfilled love. 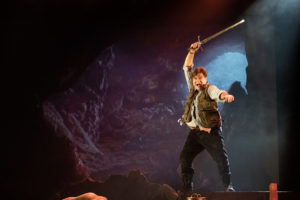 The stage movement, however, followed in every detail the dazzling musical vision of Negus, who – as I have said – not only believes in this fairy tale about a boy who went out into the world to learn to be afraid, but also, as is his custom, turns it into a whole where no tacking can be heard between the individual scenes, where the orchestra does not accompany, but takes turns in picking up the singing of the soloists or in tossing them a melody, on the basis of which they develop their own story, where everything pulsates like a living organism, talks in its own voice, demands the listener’s attention to the tiniest, often overlooked details in the texture. Negus’ interpretations have this uncanny quality of being able both to appeal to the novice Wagnerians and to persuade the seasoned pundits to explore the details of past performances – and leave them convinced that LFO’s music director is perhaps the only living conductor who manages to get to the heart of Wagner’s intentions, despite the recent attempts to present his music with period instruments and historical performance practices.

This is evidenced by the very choice of the soloists, headed by the Australian tenor Bradley Daley in the title role. Daley has a voice that is not very noble in its timbre, not very nuanced, but in this it is in some primaeval, even seductive way refreshing and reliable. His singing is clearly marked by childlike freedom, unbridled determination of a feral orphan from the forest who finds fear not where he expected it, and before he does, he discovers a completely different emotion neglected by most conductors – sympathy for Fafner, a “collateral” victim, as it were, of his true aspirations. The role of the giant turned dragon was quite finely played by Simon Wilding, who had become known as Fafner already in Das Rheingold. Among the remaining members of the cast from three years ago, the one that made the biggest impression on me was Adrian Dwyer (Mime), an artist endowed with a bright and, at the same time, meaty tenor, technically well-assured, never falling into a caricature of this altogether tragic figure. Though perhaps he was not as expressive as some previous performers of the role, above all the late lamented Erwin Wohlfahrt, known from, for example, Karl Böhm’s legendary interpretation at the 1967 Bayreuth Festival. Mark Stone as Alberich was slightly less impressive than before – although it has to be said that in Siegfried his role is less prominent than in Das Rheingold, which is reflected not only in the dramaturgy of this part of the tetralogy, but also in the score itself. As Erda, Mae Heydorn capitalised on her past success – however, she is more of a mezzo-soprano than contralto, which could be heard at times in her not very dense lower register. A magnificent Wanderer came from Paul Carey Jones, whose musicality and sensibility I had admired already in Die Walküre, yet it was only now that I could fully appreciate the assets of his velvety bass-baritone. Separate praise is due to the young Colombian singer Julieth Lozano in the part of Woodbird, at last sung with a sensuous soprano sparkling with colours, at last portrayed as an erotic “arouser” of Siegfried – certainly in accordance with the intention of the composer, who entrusted the role in Bayreuth to Marie Haupt, a pupil of Pauline Viardot and performer of Venus in Tannhäuser on numerous occasions. Lee Bisset (Brünnhilde), who was phenomenal in her acting, struggled at times to control the wide vibrato in her dense, gorgeous and truly dramatic soprano – I hope that the problem will pass, because I’m really looking forward to hearing her in the final part of the Longborough Ring. 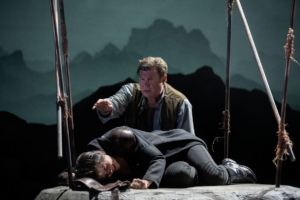 I have to complement the already-mentioned assets of Negus’ interpretation with a description of two revelations. First of all, a breathtaking “Verfluchtes Licht!” episode from Act I featuring Mime – a wild feast of lights and flames, just as emphatic as in Karajan’s famous 1969 recording with the Berlin Philharmonic, but much more vivid and three-dimensional: the first episode in this performance that made me believe in the fairy tale and immerse myself completely in Wagner’s mythical reality. The other revelation, perhaps even more overwhelming, was Siegfried’s famous song of the melting and reforging of Nothung (“Nothung! Nothung! Neidliches Schwert!”), for the first time in decades performed in accordance with the composer’s original instructions (“Kräftig, doch nicht zu schnell”, “Schwer und kräftig, nicht zu schnell”). Nothung’s rebirth was finally given proper weight – thanks to wise collaboration between the singer and the knowledgeable conductor. I need not even mention the ecstatic finale of Act III, in which Brünnhilde bids farewell to the old order of things and throws herself into the arms of her long-awaited lover. Negus has already proved many times that he is able to control tension until the very last bar, which reverberates, fades away and rouses the audience to a frenetic ovation.

I will repeat the words of the simpleton from Brothers Grimm’s fairy tale: I finally know what fear is. Most importantly, however, in Longborough I also got to know what love and compassion is.