Before the Glasgow première of Rusalka, the local press announced the grand return of Dvořák’s masterpiece after over half a century’s absence from the stages of Scotland. This is a somewhat misleading statement, because Scottish experiences are limited to five shows – and those, given by the ensemble of the National Theatre in Prague as part of a grand review of Czech operas at the Edinburgh Festival in 1964. Aside from Rusalka, the Scots also encountered Janáček’s Kát’a Kabanová for the first time. The remaining works, From the House of the Dead by the latter composer, along with Smetana’s Dalibor and Cikker’s Resurrection, were completely unknown in the British Isles. Forasmuch as Janáček’s legacy – in large measure thanks to the later efforts of Sir Charles Mackerras – gained a broad audience of British fans and set forth from there to conquer stages all over the world, Rusalka – which was, after all, composed at the same time as Jenůfa – finally gained universal recognition only less than 20 years ago; and even so, it is not a frequent guest in the repertoire of the great opera houses. This is partly by virtue of the staggering technical difficulties presented to the performers in the lead roles; but above all, on account of the gap between the relatively conservative score and the extremely Modernist libretto abounding in symbols and hidden meanings. Stage directors unaware of these riches either present the opera in the spirit of a naïve, though gloomy fairytale for adults, or attempt to set the conflict outlined in it in a contemporary context, which results in a stylization of the title character as a prostitute kidnapped from a bordello, or as the repressed victim of a pedophile.

Meanwhile, Jaroslav Kvapil’s libretto – aside from its numerous references to Andersen, Friedrich Fouqué and the Melusine legends – also draws inspiration from the fairytale-naturalistic plays of Hauptmann and the late, symbolist œuvre of Ibsen. Kvapil had already touched upon the clash of two world orders previously, in his own dramas. He was a superb stage director, one of the pioneers of Czech Modernist theatre. His Rusalka, brilliantly constructed in the linguistic and dramaturgical planes, is a masterpiece unto itself, betraying an odd kinship with the œuvre of Oscar Wilde. It is a fairytale about lovers imprisoned not between reality and the realm of magic, but rather between life and death. It is a tale of the futility of all kind of sacrifices, always made at the wrong time – a pessimistic and decadent tale, but one not devoid of the grotesque or of black humor. In other words, it displays the literary face of Eastern European Modernism, cut by the blade of plebeian wit and reflected in the dark depths of a fairytale lake.

After previous experience with the theatre of Antony McDonald, who is also – and perhaps above all – a stage designer sensitive to and conscious of tradition, I had no doubt that his concept would get to the bottom of this grim story. I did not expect, however, that it would do so with such power. The director has introduced a few important changes to the Grange Park Opera staging (2008) now being revived in Glasgow; but even back then, he garnered praise for his faithfulness to the text and the perspicacity with which he transferred the content of the score and libretto to the stage without imposing new meanings upon them. I was convinced of the rightness of these compliments already during the overture, which was illustrated with a Terry Gilliam-style collage animation. The ‘upside-down mermaid’ lying at the bottom of the lake, a creature with the head of a fish and the legs and bare loins of a woman, came straight from Magritte’s canvas entitled L’Invention collective. The Surrealist painting from 1934 clearly reflects what is most important in Rusalka: the reversal of the fairytale order of things. Let us prepare for the tale of a water nymph who, to her own undoing, allows herself to be beguiled by a human being. 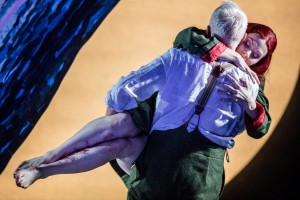 In his stagings, McDonald likes to allude to the context in which a work was written. This time, he passed his vision through a filter of Modernist aesthetics. The forest of tilted tree trunks and the lake suggested by black, immobile waves emerging from a trapdoor is inevitably associated with German Expressionism, but also with the legendary Prague stage designs of Vlastislav Hofman from the 1920s. The gloomy draperies, the antlers hung beneath the ceiling around the ballroom, and even the characteristic chairs in Act II are, as it were, taken straight from his later designs for Ostrovsky’s The Forest at the National Theatre. The Prince’s retinue parades about in Austrian hunting costumes; the ladies at the wedding-that-never-happened have Klimt-like hairstyles. The drastic transformation of Rusalka the Mermaid into a woman takes place at the home of Ježibaba – we figure out the details for ourselves from the shadows crawling over the walls and the bucket of blood poured afterwards into the lake. The protagonist loses her power of speech and her fish tail; she does not, however, completely lose her previous identity. The image of a fish’s body torments her at every step: in the witch’s dress, laced up in a manner resembling a fish’s spine; in the Foreign Princess’ bright red creation that makes her look like a salmon swimming upstream to the spawning ground; in the ghostly pictures from the Prince’s kitchen, where the servants dress absolutely real mackerels, gutting them in bloody gloves.

The rest plays out in a sphere of precisely-polished theatrical symbols. The doctor called to attend to Rusalka is astounded to discover that the patient lacks knee reflexes. The Prince places his hand on her forehead several times – in a reversed gesture of parental care for a feverish child. While preparing for the wedding, Rusalka spends too much time enjoying a bath in the tab, and when dragged out of the water, she stretches out like a fish caught on a hook. Covered with a veil, she falls into a panic and struggles as if in a net. The artificiality of the human world finds clear reflection in the famous polonaise – danced with wine glasses, napkins and soup spoons by the guests gathered at the table; and the sincerity of the wood sprites’ world, in their lascivious, carefree and… sprightly dances (choreographed by Lucy Burge), which are not interrupted even by Rusalka’s tragedy.

What makes the greatest impression, however, is the final duet. It appears that McDonald was aware of a strange – though perhaps only superficial – flaw in Kvapil’s libretto. By what miracle does the Prince hear Rusalka, since Ježibaba has not removed the curse from her? It may be that he actually doesn’t hear her at all. Perhaps he only carries on with his mad monologue and, unable to wait for a response, answers himself. Rusalka – now dressed in white and in a snow-white wig – keeps her distance from the Prince. Finally, she gives up and, with a facial expression of which the Snow Queen herself would be proud, kisses him violently on the lips. The Prince goes limp, falls to the ground, assuring her that he is dying a happy man; but even at such a moment, he will not know the passionate embrace of his chosen lady. The phenomenally-arranged stage lighting (Wolfgang Goebbel) sucks the rest of the blood out of both of them. The demon of death departs. 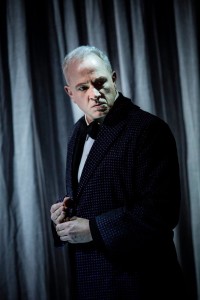 Stuart Stratford, named artistic director of the Scottish Opera nearly a year ago, has only now decided to prepare a production under his own baton. The conductor, who after studying at Cambridge with David Parry spent three years honing his craft under the watchful eye of the legendary Ilya Musin in St. Petersburg, has a superb feel for the Slavic opera idiom. One could even say that at moments, he feels it too well – delighting in the velvety sound of the strings and the subtle, slightly hazy sound of the wind instruments, he sometimes dragged the tempi excessively, putting the singers’ capabilities to a difficult test. We should remember, however, that in the fragments in which the orchestra’s work plays a momentous role – for instance, in the famous ‘duet’ of the Prince and Rusalka at the end of Act I, where Dvořák threw the entire weight of the title character’s muteness onto the shoulders of the instrumentalists, but especially in the opera’s cathartic finale, with the frustrated yearning motif played in retrograde by fortissimo brass – the brilliantly skillful accumulation and release of tension was impressive. Stratford has a very vivid sonic imagination and is able to convey his intentions to the orchestra, which in the case of a work sparkling with such a rich harmonic language is inestimable. 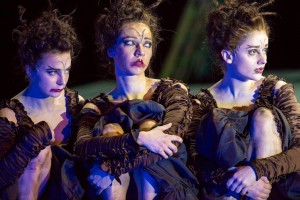 Another advantage of the Scottish Rusalka is the superb cast, although I am sorry to have to admit that its weakest link turned out to be the performer of the title role. Anne Sophie Duprels has the perfect look for this role, her acting technique is also impressive, but her otherwise pretty soprano voice is decidedly too ‘thin’, and her attempts to artificially darken her voice – without sufficient support – resulted in problems with intonation and excessive vibrato, particularly severe in the famous aria ‘Měsíčku na nebi hlubokém’. The ladies who played Ježibaba and the Foreign Princess came out decidedly better. The experienced and technically splendid Leah-Marian Jones  created a witch bordering on caricature, without violating the rules of good taste. Natalya Romaniw in the part of the calculating seductress displayed all the values of a powerful and yet clear, rounded soprano voice. In a class unto himself was Sir Willard White (Vodník) – one of the most distinguished bass-baritones of the 20th century, now 70 years old, who from act to act built a clearer and clearer, more and more tragic characterization of Rusalka’s father – the most human of the non-human protagonists of this drama. Also deserving of favorable mention are singers cast in supporting roles, especially Julian Hubbard (the Gamekeeper), who is departing from the baritone repertoire in the direction of tenor roles – the young singer has not only a charming voice and quite nice technique, but also an extraordinary sense of humor. The great revelation, however, was Peter Wedd. Throughout last season, he consistently worked on the depth of sound and volume essential for the role of Tristan; thus, I was initially concerned about whether he would be able to keep his now fully-Wagnerian voice under control in the role of the Prince – a heroic role, but one requiring a large dose of lyricism and, above all, a large range. Fortunately, my fears turned out to be groundless. Wedd has a feel for Dvořák’s peculiarly ‘Slavic’ phrasing, and his breathing technique works perfectly: he does not attack the high notes, but rather draws them out gradually, according to the logic of the musical process. His greatest asset is a secure, golden middle range, from which he fluidly, almost imperceptibly moves into other registers. One has to be a first-rate artist to sing this role at all – Wedd has polished it in its tiniest details, chiseling the individual sentences like a woodcarver. Hearing his ‘umírám ve tvém objetí’, not a few of his professional colleagues would turn green with envy.

The Scottish Opera’s latest production is yet more evidence that masterpieces do not need reformers – rather wise, humble servants. Sometimes it is worthwhile to go outside the bounds of one’s own ego and find more interesting things in the score itself.