So what exactly is the Orient? Where does the West begin? Many great minds have pondered over this question and even I at one time added my own small contribution when writing that it depends – not only on one’s point of view but also on a point on the map that designates a place where one was destined to be born. Residents of our part of the continent tend to associate the Far East with Japan, China and the two Koreas, the British on the other hand – with arctic Chukotka, while to the French the Orient has associations with North Africa and what follows naturally, regions of Arab cultural influence. Consequently for them the East has ended up in the West, namely the Iberian Peninsular. Hence it would seem that the Orient lies not only to the east of the world as we know it, but beyond it.  We also rarely admit to ourselves that from a perspective of others our culture lies in the sphere of Asiatic influence – and very often Poland is perceived in this way, if only by Americans whom we so admire.

Perhaps such divisions are artificial? Perhaps they should be nipped in the bud during childhood, like my father did a long time ago when he sent me on my first independent holiday to his Armenian friend, whose family escaped from Dresden to the more culturally closer, almost “Constantinoplean” Sofia just before the Second World War. There were days when all I wanted was to be somewhere else. For how possibly could one stand being in a household where the host talks with his Egyptian mother (NB a soloist with the pre-war opera in Cairo) in German, with his wife in Bulgarian, with his sister in Armenian and with me in Russian? Meanwhile the elderly lady communicated with me exclusively in the language of Shakespeare, completing the impression of an accursed Tower of Babel, where one could only catch breath after supper once Alexander had bid his mother good night in her carpet-strewn bedroom and sat down at his white piano to play and sing arias from his favourite operettas. Suddenly we would find a common language. 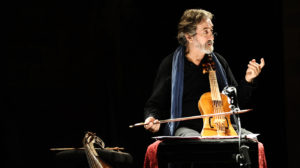 Or perhaps it only seems that way. For on deeper reflection it transpires we are stretched between paradoxical extremes of perceiving – the East and the West. It would seem we share the fundamental view that perception defines discourse. According to world opinion we are supposedly guided by hearing rather than sight. However we tend to betray different perceptive habits, in some mysterious way associated with a culture we come from, though not necessarily the culture we were brought up in.

In the performance of music the most interesting question is that of “truth”, in other words fulfilling the postulate of “being faithful to the text”. For a person from the West a slavish faithfulness to a score is the antithesis of authenticity, proof of laziness or even cowardice on the part of the interpreter, who cannot be bothered to delve deeper into the meaning of the work. A person from the East believes in adhering to certain rules, calls for a return to a collection of conventions, to the original text and insists that the text itself resists arbitrariness on the part of the recipient, that it is never wholly open to interpretation, that some things are just not done.

Hence one can have a twofold approach to Jordi Savall’s and his Hesperion XXI ensemble’s project of East – West Dialogue of Souls, in which the musicians combine everything with everything; Jewish tradition with Muslim and Christian traditions; popular with religious music; instrumental with vocal. An improvisation on a theme of the Old Testament lament Song of Songs with La quarte estampie royal taken from a 13th century manuscript of French, Greek, Cypriot and Turkish folk music with songs of Sephardic Jews. Works based on maqamat, namely a system of melodic modes used in traditional Arabic music that however comes from the region of contemporary Romania and Moldova – with the Armenian lament Ene Sarere. Here we have a juxtaposition of various vocal traditions: Jewish, Turkish and Greek. In the ensembles we have marriages between an Armenian double-reed duduk and a Middle Eastern ney flute; a Persian oud lute and a Near Eastern sitar qanun; santoor cymbals of Indian origin and a medieval fidel and rebec. 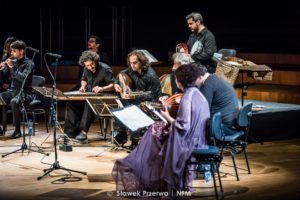 Some will be tearing their hair out that Savall is rolling out compositions cohesive to the core, performed without an ounce of bravado in an old-fashioned performance manner associated with interpretations of period-performing dinosaurs of the 1970s, if only to mention the Munich-based Early Music Studio. That works drawn from Eastern traditions are intolerably “prettified” and stripped off their scales (suffice it to mention that Turkish classical music adheres to eighth-tones, namely intervals that differ approximately by a pythagorean comma, as a result of which their “half-tones” measure circa 90 cents and “whole” tones – 240).

Others will protest that Savall is no longer bothered with the realistically impossible utopian concept of musical truth, that influenced by personal tragedy and dramatic world events he has decided to pursue other ideals. A dream of unity between seemingly incompatible cultures and religions, unity that in his opinion is impossible to achieve through intellectual discourse. The only way of making this dream come true is through art, through the mentioned titular “dialogue of souls” that exploits a language in which the word plays an equally significant role as in the language of sound and explicitly respectful silence. Savall attempts to create a “spiritual counterweight” to the dramatic conflict between civilizations of the East and West. This he has tirelessly attempted to do since at least the beginning of the century, since the outbreak of the latest armed conflict in Afghanistan. He tries even harder in a reality where in headlines news the refugee drama vies for attention with the tragic victims of international terrorism.

The question is whether to trust or succumb to the defeatist quote from Kipling’s ballad (“Oh, East is East and West is West, and never the twain shall meet”)?  It would be better to first listen how a Jew talks with an Arab and a Turk with a Catalonian; perhaps in different languages but at least on the same subject.