Exactly three years have passed since my last visit to Athens. For the Lohengrin staging prepared by Antony McDonald, I was prepared to go anywhere – and I still am, if this extraordinary production sees more revivals. At that time, I happened upon a crucial moment in the history of the Greek National Opera: it was the last première under the directorship of Myron Michailidis, who was removed from his artistic position by the Minister of Culture at that time, Lydia Koniordou. A few months later, the ensemble moved to its new headquarters on the premises of the Kéntro Politismoú Ídryma Stávros Niárchos, a complex built by a foundation named after one of the most powerful Greek shipping magnates. Plunged into an economic crisis, Greece – the ‘sick man of Europe’ with debt exceeding 180% of GDP – struggled to realize this endeavour, whose final cost came out to EUR 566 million. The enormous complex, designed by Italian architect Renzo Piano, included the new headquarters of the Opera and the Greek National Library, as well as a park over 20 hectares in surface area, which for the moment resembles a just barely regenerated forest nursery.

Michailidis’ legacy was taken over by composer Giorgos Koumendakis, who had previously directed the Opera’s alternative stage. The ensemble’s operations at the new headquarters were begun by Vassilis Christopoulos, one of the most interesting Greek conductors of the younger generation, who chose Strauss’ Elektra, not previously presented in this country, for the inauguration in 2017. The première was accepted enthusiastically, as was the production of Shostakovich’s Lady Macbeth of Mtsensk that took place almost two years later under the same baton. This year, the GNO management decided to raise the theatre’s prestige to a yet higher level, inviting French stage director, actor and dramaturg Olivier Py to collaborate in the first Greek production of Wozzeck. Py is the current director of the Avignon Festival, an ardent advocate of political theatre and a suggestive scandalmonger who loves to combine hard-core sex and nudity with religious subtexts in his stagings. With iron consistency. But not always with good results. 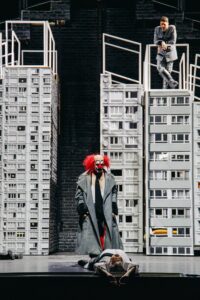 We have more and more directors in opera theatre who prioritize their original ‘signature’ over the more or less obvious message of the work. By the laws of probability, sometimes they do succeed in getting to the heart of the matter. This time, not so much. In the Athens production, the revolving stage again spun with an illusion of a soulless metropolis designed by Pierre-André Weitz. Props and symbols played to exhaustion in Olivier Py’s previous stagings appeared on the stage of Stavros Niarchos Hall: a skull, a circus clown, unbridled orgies in disco lighting. To make the matter worse, there was no lack of ideas familiar from other malapropos takes on Wozzeck, chief among them the Warsaw concept of Krzysztof Warlikowski, repeated with certain modifications at De Nationale Opera in Amsterdam – among others, transvestite Apprentices and a Captain transported to ‘civilian life’, who comes out in Olivier Py’s vision as an ordinary Herr Hauptmann. 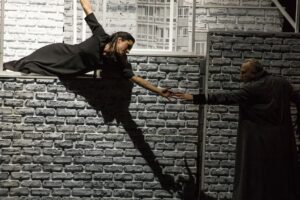 I have written many times now that Wozzeck can be modernized, but this opera should not be removed from a military context: the only one where the opera’s dilemma of power and dependence fully reaches the viewer; the only one that permits one to fully understand why the Doctor and the Captain treat the title character like swine and speak to him in the third person. Py went even further: he tangled up the two orders. There is no stuffy barracks atmosphere here, there are no direct references to cruel experiments on conscripts; on the other hand, there is a pot of peas upon which not only Wozzeck gorges, as well as medical examinations that consist mainly in removing the protagonist’s trousers and underpants. In place of the operetta-ish Drum Major, we see a sadist in uniform who torments his own sub-unit. We do not know who Wozzeck really is, and why he puts up with all of the humiliation. His insanity appears to have nothing to do with wrongs done to him – the figure of the Madman (in the form of a clown) accompanies him almost from the beginning, excluding anyone’s causative contribution to the final tragedy. There are houses of concrete, there is no free love, there are marital relations and acts of fornication – just as in Martyna Jakubowicz’s immortal ballad – and nothing comes of it. In this concept, Marie’s red slip disappears, her red earrings do not shine, there is neither blood nor a red moon. There is a gray wall, a gray staircase and gray windows – as in all of Olivier Py’s stagings to date. 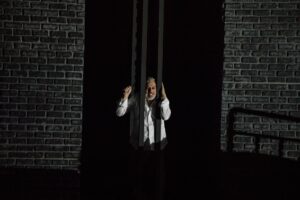 A pity all the greater that Vassilis Christopoulos drew out of this score everything that could possibly be drawn from it: its merciless moto perpetuo, the luminous texture of the polyphony, the precision of the insistently-recurring micro-motifs. All the more admiration for Tassis Christoyannis in the title role – who, making masterful use of his delicate, shockingly lyrical baritone, managed to supply Wozzeck with the characteristics that the staging’s creator had skimped on giving him. In terms of vocal technique, he was fully equaled by Peter Hoare in the role of the Captain – a tenor going far beyond the ‘character’ requirements of this role, endowed with a bright, intonationally secure and superbly-placed voice. Nadine Lehner, in the role of Marie, did not always manage well with Stavros Niarchos Hall’s difficult acoustics – her soft soprano, beautifully developed in the lower register, sometimes sounded too dry and harsh in the upper notes of her range. Peter Wedd gave the impression of not completely entering into the role given him by the stage director: his beautiful, rounded, truly heroic singing did not fit with the repulsive vision of the Drum Major – let us add: a vision not in accordance with the concept of Berg, who saw a grotesque figure in Marie’s lover rather than a terrifying psychopath. Among the creators of the supporting roles, a sympathetic mention is certainly deserved by Vassilis Kavayas – who, despite having been neglected by the stage director, tried to build a convincing character of Wozzeck’s friend Andres.

I don’t know how the further fortunes of the Greek National Opera will play out. For various reasons, I wish them all the best. Bringing Olivier Py to Athens was certainly a smooth marketing move; but in the longer term, nonetheless, it would be worthwhile to initiate collaborations with artists who have something truly essential to say in this peculiar theatrical form. I still have in memory an interview that Py gave a dozen or so years ago to the French monthly Diapason. At the time, he said he would not rest as an opera stage director until he had tackled a production of Wagner’s Parsifal or Der Ring des Nibelungen. Perhaps some other theatre will summon up the courage, and we will be able to finally close that subject?