When it seemed that nothing could disorganise operatic life more than COVID, war was added to the still smouldering pandemic. It has changed little in Polish opera houses. If anything, it has further depleted their repertoires and for a long time to come at that, for we Poles observe the total boycott of Russian culture sometimes even more strictly than the Ukrainians themselves. This is not the case  elsewhere, as the world at large has lost faith in the efficacy of artistic sanctions and has experienced a backlash for implementing them too zealously in the first months of the invasion. Solidarity with the fighting Ukraine is now manifested in other fields. It could be said that the opera community has entered the stage of positional warfare. A no-man’s land stretches between advocates of laissez-faire and advocates of categorical sanctions, controlled by neither side. Those taking the rap are those disrupting this fragile equilibrium, as happened to Oksana Lyniv, who, shortly after taking over the musical directorship of Teatro Comunale di Bologna, decided she would not conduct concert performances of Tchaikovsky’s Iolanta. The decision was prompted by a wave of violent protests by her compatriots, outraged not only by the choice of the work, but also by the casting of a Russian singer in one of the supporting roles.

There were no such controversies at Bayreuth. Lyniv enjoys enduring sympathy of the local audience, who pay attention not so much to her gaffes, but to her general attitude towards the war. Last season she was welcomed with open arms as the first ever female conductor in the history of the festival. This year she returned to the Green Hill with Der fliegende Holländer as seen by the Russian director Dmitri Tcherniakov. In a staging that would have attracted crowds of Polish opera lovers to Bayreuth, if the title role had been sung, as originally planned, by Tomasz Konieczny. Many of these opera lovers would not have let Tcherniakov into any opera house in Poland: not only because of his nationality, but also because Tcherniakov was one of the signatories of the famous petition against the boycott of Russian artists signed by, among others, Barbara Hannigan and Antonio Pappano. For Lyniv it was enough that Tcherniakov showed unequivocal support to Ukrainians affected by the war. That was enough for me as well; I came and I was not disappointed. 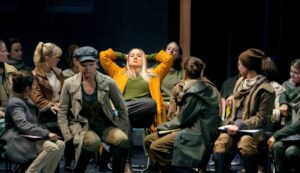 Bayreuth productions – unless they are complete failures – clearly improve over successive seasons. Yuval Sharon’s production of Lohengrin, criticised shortly after the premiere, ended its run this year to almost tearful goodbyes. Something similar will probably happen to Tcherniakov’s Holländer, although the director – as is his wont – tells a completely different story in it, seemingly without engaging in any dialogue with the original. Let me stress this: seemingly. If we can manage to overcome the understandable rebellion of a Wagnerite within ourselves and approach this staging with a completely open mind, it will turn out that Tcherniakov has disposed of what is unbearable and incomprehensible in the work. Above all – of the motives driving Senta, who, indeed, is a prototype for the later Wagnerian redeeming female figures, but at the same time an extremely irritating character crossing the thin line between the obstinacy of a spoilt teenager, and just as childish stupidity and naivety. By turning the tormented wandering sailor into a calculated avenger, Tcherniakov has finally explained this stupidity and thus, paradoxically, made the story told by Wagner more credible. Senta’s teenage rebellion takes the form of a mindless infatuation with the mysterious stranger – an infatuation that does not pass even when the Dutchman reveal his true face. Her love resembles the feelings which emotionally immature women have for terrorists and serial killers. 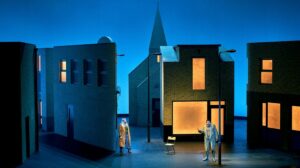 Such a story requires an introduction (in the form of a moving pantomime to the sounds of the overture, when we get to know the cause of the Dutchman’s trauma: his mother, rejected by Daland, committed suicide before the boy’s eyes) and a modified ending, again only seemingly contradicting the composer’s intention (the orgy of revenge is interrupted by Mary – Daland’s wife in Tcherniakov’s version – killing the stranger; Senta’s coming to her senses and reconciliation with her mother replace the traditional vision of transfiguration). Tcherniakov’s implements his concept with admirable precision, in a clean, singer-friendly, visually stunning space (among sets designed, as usual, by himself, and perfectly lit by Gleb Filshtinsky). It is not true that his staging lacks a sea or a ship. The proximity of the ocean is suggested by Yelena Zaytseva’s costumes. The phantom ship appears during one of the scene changes – or, rather, intricate turnovers of the same sets – in the form of a sail gliding across the upstage, which in the end, much to the surprise of the audience, turns out to be the tower of a town church. There are several memorable moments in this production: from the desperate attempt to restore the dignity of the suicidal woman, when the shocked boy stops his mother’s corpse swinging on a rope and laces up her shoes, the tragicomic scene of the Dutchman’s proposal on the glazed veranda of Daland’s house, to the ominous contrast of the two choruses in Act Three, in which the ghostly sailors bring to mind equally ghostly associations with members of the gangster group Solntsevskaya Bratva. In light of the events of recent months, the blue and yellow colours of the production spoke all the more powerfully, especially in the final scene of the conflagration of the town, with a swirling mass of “black kites” in the air – debris from burned down houses, as in Czesław Miłosz’s poem.

I have to admit that my recent experience with Der fliegende Holländer conducted by Anthony Negus raised my musical expectations very high indeed. They were more than satisfied by Elisabeth Teige as Senta, a singer blessed with a meaty soprano of great beauty and velvety tone, which she wields masterfully, subtly shading the dynamics and emphasising tensions in almost every phrase. I was slightly disappointed with Thomas J. Mayer in the title role. Mayer is a very capable and cultured singer, but lacks the expressiveness of his predecessor, John Lundgren, who created a chilling portrayal of a man as repulsive in his personality as he was seductive in the beauty of his dramatic, metallically sparkling baritone. The ever dependable Georg Zeppenfeld was in a class of his own – also acting-wise – as Daland. Eric Cutler as Erik could not be faulted vocally, although he lacked subtlety and moderation in shaping this dramaturgically thankless character. A fine Steersman came from Attilio Glaser, a singer with a healthy, bright and excellently supported lyric tenor. The deep, round contralto of Nadine Weissman (Mary) showed some signs of tiredness, but they were counterbalanced by Weissman’s full commitment to the role of Daland’s tragic partner, a character by no means easy to present in such a production. 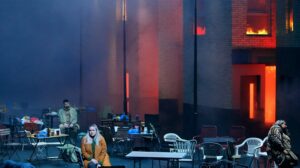 However, it is difficult to say how the singers would have found their way through this score, if Oksana Lyniv, instead of focusing on restraining the orchestral volume for most of the narrative, had taken care of the musical logic of the story and the resulting richness of the motivic work. In her interpretation Der fliegende Holländer fell apart into a set of unconnected numbers, with the orchestra simply providing an accompaniment and not contributing to the narrative fabric of the work, and with the soloists left to their own devices by the instruments hidden somewhere in the background. Lyniv’s interpretation lacked weight, vividness of sound, and at times simply freedom, which on several occasions ended in asynchrony between the stage and the covered pit, not to mention rough, intonationally uncertain passages in the strings and play-safe entrances in the winds. However, the Ukrainian conductor was given the benefit of the doubt by the Bayreuth audience and the critics present at the performances, and I will do likewise – in the hope that in a future season, under more favourable circumstances, everything will come together, be put in order and harmonised.

It’d better be very soon. The world really needs some consolation. And not just of the naive variety.