‘Of all of the children of my inspiration, this one is the dearest to me – because it came into the world most unwillingly,’ Beethoven supposedly confessed in a conversation about Fidelio with his secretary and later biographer Anton Schindler. The secretary had boundless admiration for the master and without blinking an eye bent reality to an idealized vision of his life and œuvre. At the end of the 20th century considered by musicologists to be a completely non-credible storyteller, he has recently been coming back into favour. Even if he thought up and attributed to the composer statements that had never emerged from his lips, as a rule he interpreted his unuttered intentions with extraordinary accuracy. So we can take it on faith that Beethoven really loved Fidelio, though he reworked it so many times that it would seem he took it to be the most misbegotten fruit of his imagination. The balance sheet of those reworkings is truly impressive: nearly ten years of work, four overtures, three versions of the opera itself and three librettists picking away at the text. The final result continues to evoke reservations. Opponents of Fidelio – of whom there are many in Poland – accuse it, above all, of dramatic incoherence and glaring disproportions between the naïveté of the libretto and the depth of Beethoven’s musical vision, going far beyond the operatic convention of his time. Let us put it bluntly: even those who love Fidelio only wake up halfway through Act I.

On the other hand, once they wake up, they spend the rest of the opera on the edge of their seats, and can end up paying for the ecstatic finale with the beginnings of a heart attack. On one condition, however: that they hear Fidelio in a truly superb rendition, the likes of which it has never been easy to find. Now it is sometimes even more difficult, so when I heard the news that Douglas Boyd intended to present this work in a semi-staged version at the Philharmonie de Paris – with a cast of soloists who had (at least most of them) taken part in the superbly-received productions of the Garsington Opera in 2009 and 2014 – I did not hesitate for a moment. I very much esteem the Manchester Camerata’s recordings of the complete symphonies of Beethoven under Boyd; I have heard much good about Peter Mumford, who after years of experience as a lighting designer has taken up projection design and stage directing; so I was looking forward to my first encounter with the Orchestre de chambre de Paris and the Accentus choir. This was my first visit to the new Paris concert hall, since recently bearing the name of Grande Salle Pierre Boulez, whose designers boast of innovative acoustic solutions prepared by the Belgian firm Kahle Acoustics.

Its striving for both fullness and clarity of sound turns out perfectly in smaller spaces, among others the Arsonic concert hall in Mons, which I had the pleasure of visiting in March. At the Parisian Grande Salle, however, the acoustics play tricks on both the performers and the audience. The orchestra could be heard superbly and very selectively; the choir placed behind it had difficulty carrying over the orchestra; the singers at the front of the stage battled with a well-like resonance that at times turned into a full-blown echo. In addition, I didn’t know at first what to focus on – the projections at the rear of the stage which were not too invasive, but did not contribute much to the matter either, or the acting tasks entrusted to the soloists by Mumford. I chose the latter and I don’t regret it. Mumford is a master of the theatrical shortcut – to this day I have before my eyes Leonore and Rocco’s duet from Act II, in which the horror of digging Florestan’s grave was conveyed just by the gesture of bending over a non-existent hole in the ground and by tormented brushing of imaginary dirt from their hands. I understand the financial necessity lying at the foundation of semi-staged performances. I think that in the future, it will suffice to work with the singers. Visual impressions distract one’s attention from the music itself – which in Beethoven’s case carries improbably great dramatic potential.

A potential of which Douglas Boyd made full use, with enormous benefit to the work. Under his baton, all of this score’s supposed ‘oddities’ turned out to be its strengths. The ideally selected tempi, details brought to perfection with a tenderness worthy of a chamber musician, the masterful feel for time and silence – these attest not only to the sensitivity of this extraordinary conductor, but also to an irreversible change in musicians’ minds, brought in by the historically informed performance movement. The exceptional character of Fidelio in large measure boils down the surprises it holds for the listener: the peculiarity of the bassoon and horn obbligato accompaniment in Leonore’s heartbreaking aria from Act I, the atypical key chosen for Florestan’s aria, the crazy modulations in the Adagio after the ecstatic duet of the miraculously reunited spouses. Boyd ensured that each of these elements gained rhetorical value. Where necessary, he combined textures; in other places, he painfully separated them, for instance in the introduction to Act II, before Florestan’s recitative, placing the brass chords in drastic opposition to the strings and the ominous tritones in the tympani – emphasizing with a strong gesture the disintegrating world of the prisoner locked up for eternity in a hole cut off from light and other sensory stimuli.

So all the greater was my disappointment in the choir, which was not able to resonate in the famous ‘O welche Lust!’ in Act I – more by fault of the capricious acoustics than any carelessness on the part of the conductor, as is attested by two superb solos from choristers singing the parts of Two Prisoners: Pierre-Antoine Chaumien and Virgile Ancely. Among the soloists appearing in Act I, a decisively distinguished performance was turned in by Stephen Richardson (Rocco), who has at his disposal a mellifluous, surprisingly fresh-sounding bass-baritone. This is one of those singers that one hears with equal pleasure in Mozart and Verdi (it is not without reason that he has played both Sarastro and Falstaff) – technically superb, with a beautifully open upper register and a resonant low register, ideally aware of their own vocal technique. Unfortunately, I was again disappointed by Andrew Foster-Williams, this time simply miscast in the role of Pizarro, which requires a ‘bigger’ voice with a more demonic timbre. Sam Furness, a youthful and undeniably amusing Joaquino, did a fine job. Jennifer France evoked mixed feelings in the role of Marzelline – technically flawless, but with the harsh and cold voice of a typical soubrette. I had other problems in rating Rebecca von Lipinski (Leonore), a singer of extraordinary intelligence, knowledgeable in the Classical opera idiom, sensitive and musical, but – like many other lyric sopranos – pushed by force into roles requiring a much bigger voice with a more ‘meaty’ sound. Her aria ‘Abscheulicher! Wo eilst du hin?’, rightfully rewarded with applause for its power of expression, did not meet my expectations in purely vocal terms – though I am fully aware that today, it is harder to find a good Leonore than a good Florestan. 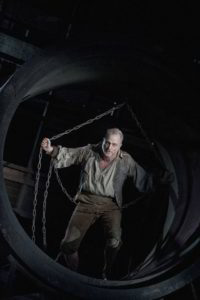 And here we get to the point. In Paris, I got a nearly perfect Florestan. This role requires something apparently impossible: the combination of a dramatic voice with a narrative suggesting that we are dealing with a person in agony, nearly starved to death and tormented by hallucinations. Peter Wedd reconciled all of these characteristics with brilliant technique and the peculiar timbre of his tenor instrument. He led out with a short crescendo on the note G in the initial ‘Gott!’ from the recitative in Act II, in the blink of an eye exploding in a complaint addressed to God. The phrase ‘Welch’ Dunkel hier’ was sung pianissimo, broken by despair. In the aria, beginning in the key of A-flat major – and therefore extremely uncomfortable for the voice – he moved through every shade of hope, desperation and ardent longing. If anyone thought that Wedd was carried away by emotion in the final segment of the poco allegro, they quickly changed their mind upon hearing the initial phrase of the trio ‘Euch werde Lohn in besseren Welten’ – in its intensity of lyricism exceeding the most brilliant renditions of past masters, chief among them Ernst Haefliger. And then Wedd took on the duet ‘O namenlose Freude’, in which the tenor normally does not keep up with the soprano. This time, it was the other way around – Rebecca von Lipinski was not able either to carry over the orchestra, or to equal the intensity of Florestan’s fiery singing. The fluidity of the legato and precision of the articulation in the fast passages in this fragment attest to total mastery of vocal technique – especially with such extensive volume as this singer presently has at his disposal.

After the ecstatic finale, there was an explosion of applause the likes of which I had not seen in a long time – and that, not only on Polish stages. I closed my eyes and imagined that time was circling around: that Wedd had gotten Leonie Rysanek or Christa Ludwig as a partner. One can always dream. For the moment, I will just quietly recall that our Paris Florestan also has Parsifal in his repertoire. And then wait for some opera house director to take that into account.