Gustav Mahler wrote his Symphony no. 8 as if the Creator Spirit itself had filled him. He composed it in the peace and quiet of his ‘hut’ near the hamlet of Maiernigg, at the edge of the Carinthian Wörthersee – in the same place where his Rückert-Lieder, Kindertotenlieder and previous symphonies starting with no. 4 had been written. This time, however, he worked at an insane tempo. He arrived in Maiernigg in June 1906 to make essential corrections to the orchestration of Symphony no. 7. In a sudden burst of inspiration, however, he ended up focusing on a new piece which he intended from the very beginning to open with the 9th-century hymn ‘Veni Creator Spiritus’, which is performed during the liturgy for Pentecost, among other occasions. The original plan to create a reasonably traditional four-movement symphony quickly gave way to the idea of a work ‘so peculiar in content in form that there is no way to describe it directly’. The three subsequent segments merged into a powerful, separate movement based on the text of the last scene from Goethe’s Faust, in which the cleansing of the protagonist is fully realized: after death, the time for action ceases, the time comes to accept the gift of love – in all of its manifestations, evolving however from the earthly, sensual love enclosed in words and images, through all kinds of higher forms, up to its final fulfillment, in which it approaches the ‘unspeakable’. In the Eighth, later called the Symphony of a Thousand by virtue of its enormous performance ensemble, the religious sphere rubs shoulders with the human, even in the purely musical sphere. In the first movement, the Creator Spirit comes down to earth – with the descending fourth in the initial ‘Veni’. The penitent souls in the second movement rise ever closer to Heaven on the same notes – this time, however, ascending. The prayerful key of E-flat major collides with the ecstatic, passionate, extremely distant key of E major. The Gregorian hymn, which in Mahler’s rendition has taken on all of the characteristics of a motet – with a powerful double fugue set in the Bach tradition – finds a peculiar development and recapitulation in the ‘Faust’ movement. The plea for heavenly grace will be fulfilled by the redeeming power of love. Superficially contradictory visions of the hereafter will come together in the form of a universal desire for the greatest good.

And wonders never cease: for the audience at the Munich world première in 1910, all of these ideas were considerably more intelligible than for contemporary listeners. The work scored a staggering success incomparable with the reception of any of Mahler’s other compositions. It disturbed no one that in this concept of awesome proportions, the orchestral song merged imperceptibly into a cantata, that the masterful combination of musical forms does not permit one to determine whether it is still an oratorio, or perhaps now an opera, or perhaps yet something else. Mahler exhausted the limits of the choral symphony, just as Pérotin had previously brought the evolution of organum to its end. After that, there was nowhere else to go. Perhaps it is for this reason that the Eighth was to find so many enemies in the future, accusing the composer of gigantomania, cheap optimism, a predilection for kitsch and a triumph of expression over content. It was recorded with reluctance and performed rarely – not only because of the logistical problems in putting together a colossal orchestra, three choral ensembles and eight soloists, but also on account of the difficulty in weighing the sound proportions of this behemoth. In the massive tutti passages, the subtleties of the orchestration were often lost; singers able to pierce through the unrelenting wall of sound often possessed voices as sonorous as they were hideous in tone color. Even in my favorite recording with the London Philharmonic under the baton of Klaus Tennstedt (with excellent soloists, among them Jadwiga Rappé), there are flaws in intonation, and the whole leaves an impression of dissatisfaction with the sound in the choruses. Interestingly, what still makes the best impression is discs recorded live – as if this riveting musical confession of faith resisted all attempts at sober calculation.

This time, I had an unusual opportunity – three days before the dress rehearsal for Tannhäuser in Longborough (about which I shall write shortly), the combined ensembles of the Opera North orchestra, Leeds Philharmonic Chorus, Leeds Festival Chorus, Bradford Catholic Youth Choir and soloists – who without exception had participated in this year’s complete rendition of the Wagner Ring cycle, or in one of the previous ‘segments’ of this endeavor realized by Opera North in the period from 2011 to 2014 – gave us the Eighth under the baton of David Hill. In a hall of equally tremendous proportions to the symphony itself – the auditorium of Leeds Town Hall, described brilliantly in Liquid Modernity by Zygmunt Bauman, longtime department of sociology chairman at the University there. The monstrous Town Hall building, erected in the 1850s according to a design by Cuthbert Brodrick, was until recently not only the most magnificent, but also the tallest building in Leeds: a brick-and-mortar symbol of the progress, work ethic and timeless values of the Industrial Revolution. Furthermore, its interior houses the largest three-manual organ in Europe. It is difficult to imagine better conditions for a performance of the Symphony of a Thousand – despite the quite capricious acoustics of this hall, recently improved by the installation of a multi-segmented canopy over the stage but remaining, to put it delicately, none too selective. I also had high expectations from the concept of Hill, a distinguished organist and conductor with enormous choral experience. 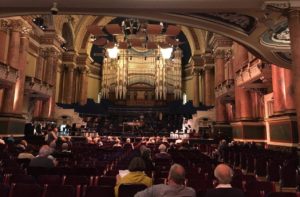 For the most part, my expectations were fulfilled. After well over ten years of work with Richard Farnes, the Opera North orchestra – the only ensemble in the British Isles that combines opera and concert activity throughout the entire season – plays with a gorgeous, round and simultaneously fresh sound, retaining extraordinary sensitivity to all manner of changes in dynamics and tempo. What I missed with Tennstedt – that is, complete engagement and a juicy sound in the choruses – I got with interest from David Hill, who effectively emboldened not only the little singers from the Bradford Catholic Youth Choir, but also the members of the festival choir, not to mention his own ensemble, the Leeds Philharmonic. Hill conducted at quite fast tempi, very skillfully building and releasing the culminations, beautifully layering the texture and emphasizing the details of the intricate polyphony.

However, he did not manage to seal up the apparent break between the two movements of the symphony – indeed, if anything, he widened the gap with his management of the pause between the Latin hymn and the ‘secular’ final scene from Faust. Frankly, I got the impression that he had treated the ‘Veni Creator Spiritus’ a bit dismissively, as it were not perceiving the subtle play with the musical material of the two movements which is essential to combine Mahler’s concept into a single whole. More importantly, however, he did not take care to balance the sound proportions in the solo ensemble, which fell apart into a female group decidedly more audible but of less sensitive musicianship, and three male voices singing with beautiful tone color and superbly polished phrasing, but often drowned out in the tutti passages. The intonation slip-ups and excessive vibrato of soprano Lee Bisset, I will chalk up to her recently having given birth and had a difficult last season; it is more difficult for me to reconcile myself to the screaming high notes and stentorian manner of Katherine Broderick – who was, judging from the reviews, highly rated by the local critics. The indisposed Kate Valentine in the role of Una Poenitentium was substituted at the last minute by Paula Sides – a singer experienced in the Baroque repertoire – with a nevertheless superb result. Of the three anchorites in the second movement, I was a bit disappointed by Andrew Foster-Williams (Pater Ecstaticus), one of my favorite British baritones, who performed his short solo in a very cultured manner, but with a clearly tired voice. A better impression was made by Michael Druiett (Pater Profundus), gifted with a charming, velvety bass-baritone with a beautifully open top register – though he too sang, as it were, without conviction. Peter Wedd (Pater Marianus), as usual, saved up reserves for the end – his ‘Blicket auf’ floated in a truly ‘enraptured’ manner, carried out with ardent yet highly lyrical phrasing, in an ideally controlled, meaty-sounding voice.

During one of rehearsals for the concert. Photo: Leeds Philharmonic Chorus.

All of this, however, was repaid by the final ‘Chorus Mysticus’, which built up here, subsided there, leapt upward, sat down on the slope of a mountain ravine, and finally exploded in ecstatic praise to the Eternal Feminine and merged with the recurring ‘Veni Creator’ motif. All that was lost in us here is corrected.