I love to wade many times into the same river. Perhaps because I was paying attention during my classes in ancient philosophy and I know that there is basically no way to wade into the same river even once, because by the time we are up to our knees in water, everything will already be different – the current will have flowed forward, the stones on the bottom will have shifted, our bodies will be covered in goose bumps. Observing these subtle Heraclitean changes has always attracted me more than wandering around the world in search of more and more new rivers, so I decided  – after last year’s enlightenment by Tristan – to return to Longborough for Tannhäuser and see what would happen this time.

It was a doubly sentimental journey for me, for it was thanks to Tannhäuser that I fell madly in love with Wagner and with opera in general. With the pure and naïve love of a fourth-grader who has signed up for the children’s choir at Warsaw’s Grand Theatre and, shortly thereafter, gone out onstage with the pilgrims’ choir in Act III. From that show, above all, I remembered my amazement that the rocks were made of some weird foam and gave way beneath each step. After that, I began to listen (this was back in the days when Poles were still able to, or at any rate wanted to play and sing Wagner). After the première, we purposely came to the theatre early to cheer on our colleague in the role of the Shepherd in Act I. After two years, I got a tiny role as a Page, so I got to know Act II inside out. Tannhäuser played 34 times in Warsaw, which meant an average of 8 shows per season. Enough to catch the Wagner bug and, by the end of primary school, hear the entire Ring on the same stage – and that, in the captivating rendition of Kungliga Operan in Stockholm, which appeared in Warsaw under the baton of none other than Berislav Klobučar. Those shows – visually tasteful, extraordinarily economical in form, growing out of the spirit of German Modernism – also formed my theatrical taste. Annelies Corrodi, the stage designer for the Warsaw Tannhäuser, learned her craft with Helmut Jürgens, who was associated with the Bayerische Staatsoper after the war. The stagers of the Swedish Tetralogy – Folke Abenius and Jan Brazda –  turned out to be imitators as faithful as they were intelligent of Wieland Wagner, the great reformer of Bayreuth.

So one can say that in my childhood, I had the good fortune of contact with authentic Wagner, interpreted in accordance with the composer’s intentions and with trust in the power of the music itself. No doubt this is why I yielded completely to the charm of the Longborough Festival Opera, a venue so modest that there is no way to imagine any kind of director’s orgy there; but most importantly, an opera led by the hand of a master who has many times now proven that he is one of the most superb Wagner conductors on the planet. Unfortunately (or perhaps fortunately), Anthony Negus is entirely content with his position at Longborough; he makes no recordings, chooses the (often unknown) singers himself, and counts on a handful of enthusiasts who will come out to the Cotswolds to acquaint themselves with the fleeting effect of his work at a countryside Bayreuth converted from a chicken farm. 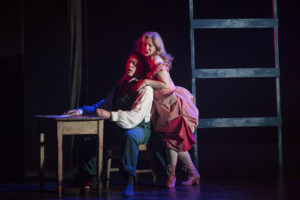 Tannhäuser, despite being placed chronologically between Der fliegende Holländer and Lohengrin, touches upon themes characteristic of Wagner’s mature œuvre: deliverance through love, conflict between the earthly world of the senses and the transcendent world of ideas, between religion and the sphere of the profane. The composer made corrections to the opera several times, and reportedly even so died in the conviction that he still owed the world the ‘real’ Tannhäuser. Tracking the sometimes small, but sometimes essential differences among the original Dresden version, the Paris version of 16 years later and the hybrid Viennese version of 1875 opens up a broad field for interpretation. With whom did Wagner actually identify? With the mysterious title character whose fervent ‘Busslied’, i.e. ‘Song of Atonement’, became a point of departure for the later legend of the knight seduced by Venus? With Wolfram von Eschenbach, one of the greatest masters of medieval epic poetry, who provided him with the inspiration for Lohengrin, Parsifal and indirectly also Tristan? Or perhaps with the peerless lyric poet Walther von der Vogelweide, the most distinguished representative of Minnesang, whom Wagner for some reason pushed into the background of the singers’ contest at Wartburg Castle? Why does the innocent Elisabeth choose Tannhäuser, not Wolfram, who so beautifully sets forth the essence of courtly love in his song ‘Blick ich umher in diesem edlen Kreise’? A certain clue is tossed out by the composer himself in removing Walther’s solo from the Paris version of Act II, as if it were important to him to emphasize the contrast between spiritual and sensual desire, and to load the entire conflict onto the shoulders of the two main male protagonists. Tannhäuser is equally as fractured and ambiguous as the life story of Wagner himself; the characters appearing in it, multidimensional; the music accompanying them, full of contradictions and harshly conflicting symbols.

I came to Longborough for a dress rehearsal that went reasonably smoothly, not counting the forced technical break in Act I and the ensuing slight nervousness among the performers, who pulled themselves together in a flash after two decisive interventions by the conductor. The musical narrative pressed inexorably forward from the first measures of the overture, not at all because of brisk tempi – rather because of lyrical motifs meticulously brought into the foreground and clear tutti chords, all underlined by exquisite articulation, especially in the strings. Negus conducts the Wagnerian orchestra like a chamber ensemble, not hesitating to use ‘old-fashioned’ portamenti, subtle tempo fluctuations, expression-laden changes in dynamics, bringing to mind the legendary recordings under the baton of Willem Mengelberg and Bruno Walter.

He requires a similar passion – which should in no way be confused with a forcing of the volume – from his singers, who are meticulously selected not only in terms of vocal capabilities, but also voice colour and skill in building convincing characters. The title role was played by Neal Cooper, who a few weeks before had gone onstage in Act III of Tannhäuser at Covent Garden as an emergency substitute for the indisposed Peter Seiffert. Cooper has a powerful voice of characteristic colour – quite rough and gravelly, sometimes indeed aggressive, sometimes shockingly seductive – in short, ideally fitting for the role of an internally inconsistent man inspiring extreme emotions. His trump card is exquisite German and a perfect feel for the text, thanks to which the ‘Rom-Erzählung’ was transformed into a monologue based on an ideal unity of music and word, evolving from complaint to derisive fury to dull despair. The only other thing I needed for complete satisfaction was a softer polishing of phrases and a certain dose of lyricism, which I got with interest from Hrólfur Saemundsson in the role of Wolfram. The Icelandic singer had a not-too-big, but very wisely used, deep-sounding baritone – it had been a long time since I had heard an ‘O du mein holder Abendstern’ in which nothing was lacking either at the top or at the bottom. The true revelation of the evening turned out to be Erika Mädi Jones (Elisabeth) – a dark, purebred jugendlich dramatischer Sopran, still a tad insecure in terms of intonation, but with such power of expression that after her ‘Haltet ein!’ in Act II, half the audience was sobbing. It took Alison Kettlewell (Venus) a little longer to hit her stride; her singing annoyed me a bit at the beginning with its too-harsh transitions between registers; but I have to admit that her authoritative, sensual voice creates a superb contrast with the vocal image of the innocent Elisabeth. There were basically no weaknesses in the cast; the 20-odd-person choir sounded cleaner and more powerful than not a few jaded opera ensembles three times its size.

The staging was prepared by the same team that had previously been involved in the production of the entire Ring at Longborough: Alan Privett (stage director), Kjell Torriset (stage designer) and Ben Ormerod (lighting designer). British critics, enamored of more visually spectacular presentations, again grumbled about the cottage character of this production, which sometimes indeed gave one the impression that the working people of the surrounding cities and villages had been employed for it. I myself have to admit that in comparison with the ascetic vision of Tristan, built basically just with lighting, the concept for Tannhäuser was lacking in coherence and consistency. I also was not convinced by the pantomime played to the sounds of the overture, featuring Wagner submerged in a creative ferment and his wife Minna trying unsuccessfully to make contact with him. The singers’ contest at Wartburg Castle, however, was seductive not only in the beauty of its imagery, but also in its excellent handling of the characters. I also forgave the creators the lack of a pilgrim’s walking stick turned green when an enormous thurible began to swing across the stage – a clear and legible sign of the protagonist’s final transfiguration.

Now all I can do is dream. That I will live to hear Die Meistersinger von Nürnberg, Parsifal or Lohengrin under the baton of this wizard. Anthony Negus restores the human dimension to Wagner’s music, stripping it of dull pomposity, revealing its relationships with tradition and perverse play with 19th-century contemporaneity. He recreates live what was lost in the technically imperfect recordings, destroyed by the passing years, of earlier masters. He awakens dormant faith in the power of the score, in the truth of the feelings contained therein. In a year, Tristan will be revived. Yet again, it will be necessary to wade into the same river. As Szymborska wrote (here in translation by Stanisław Barańczak): ‘Nothing can ever happen twice. / In consequence, the sorry fact is / that we arrive here improvised / and leave without the chance to practice.’