Before the audience gathered in the hall of the Teatro Real, and the orchestra began to tune, a strange figure appeared at the right edge of the proscenium. A disheveled man sitting with his knees apart, hunched over an angular object with which he didn’t really know what to do. He stood it upright, turned it round and round, then laid it flat again; for the most part, however, he gripped it in both hands and scraped it on the floorboards, as if trying to scrub away some stain from them. When the first notes of the prologue to Billy Budd sounded and Captain Vere appeared onstage – dressed in a modern Royal Navy uniform, bursting with youthful energy, with a face unmarked by traces of suffering – I understood that the poor, shabby wretch from the proscenium was his alter ego. And I rightly expected that the director would develop and close out this concept in the epilogue.

It is difficult to avoid the temptation to compare the two most recent stagings of Britten’s masterpiece – the October one from Leeds in the rendition of Orpha Phelan, and the Madrid one authored by Deborah Warner. Phelan has great experience in the opera theater; Warner is better known for radical productions of Shakespeare, Ibsen, Brecht and Beckett, which does not change the fact that each of the over a dozen operas she has directed has met with a lively response from critics. More importantly, this is now Warner’s third encounter with Britten’s œuvre – before, she worked on The Turn of the Screw (Barbican Theatre, 1997) and Death in Venice (ENO, 2013). The one that evoked the most admiration was the latter – with its faithfulness to the libretto and the score, its clarity of stage gesture, its suggestive illusion of time travel, of imagination and space. As a rule, the British director plumbs the depths of a work and delves into it mercilessly, laying bare the innermost emotions, drives and aims of her protagonists. However, none of the aforementioned operas is so complex and multifaceted a work as Billy Budd, as I wrote earlier on the occasion of its première at Opera North. 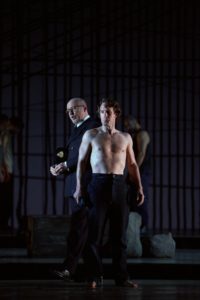 Some have criticized Phelan’s concept as being too static. With all certainty, there is no way to say this about Warner’s production. In a clean, masterfully-lit space (with stage design by Michael Levine) crisscrossed by a network of elements intersecting at right angles – cables, ladders, masts, mobile platforms – groups of deckhands milled about, sails were spread, the rigging knocked about, the deck rocked. The director mixed no less than 30 actors in among the choristers, creating the impression of a densely-packed crowd teeming at every level. In this staging, the Sisyphean labor of the sailors – that is, the scrubbing of the deck, normally only ‘played’ during the chorus ‘O heave away, heave’ from Act I – runs in the background throughout the whole narrative, organizes and brackets it with an activity as essential as it is vain. The precision with which Warner builds the individual episodes, not infrequently raising them to the level of a symbol, evokes admiration mixed with enchantment. I especially remember the scene in which the Friend comforts the cruelly-beaten Novice. Previous concepts notwithstanding, Warner played it on an empty stage: the blood-soaked, half-paralyzed Novice (the vocally and theatrically phenomenal Sam Furness, the memorable Števa from the Glasgow Jenůfa and the wonderfully capricious Joaquino from the Paris concert performance of Fidelio) crawls in from the left wings of the stage; and from the right, his Friend (Borja Quiza) slowly approaches him. They meet more or less in the middle of the platform. From that moment onward, each move of the Novice, marked by inhuman pain, causes the Friend to take a step backward. Instead of vain words of comfort for the boy, who behaves like a broken animal, we received a premonition of the terrible betrayal that the Novice would commit at Claggart’s behest – out of panic-stricken fear of yet more suffering and shame. A similar masterpiece of theatrical work became evident in the scene where Billy is woken up by the Novice – torn alternately by a feeling of guilt and his unwanted mission.

In this staging, Warner created two memorable characters – all the more convincing that they were supported by the musical artistry of ideally-cast performers. Claggart in the rendition of Brindley Sherratt turned out to be the most real fallen angel possible, a tragic being chased out of earthly paradise for his free will, incomprehension of God’s plan, ungainly craving for love. Sherratt has at his disposal a bass voice with a gorgeous tone, but at the same time oddly broken and unstable, which bothered me a bit in his recent interpretation of Prince Gremin in Onegin at the Garsington Opera, but completely enchanted me in MacMillan’s Ines de Castro at the Scottish Opera, where the singer portrayed the role of the forlorn King Alfonso. Jacques Imbrailo, one of the few superb boy sopranos who have managed to make a bravura career after their voice change, revealed an equally tragic picture of the title character onstage. In ‘Billy Budd, king of the birds!’ from Act I, his dark, dense baritone, while it did not sound as convincing as the radiant, joyful voice of Roderick Williams from the Leeds production, it nonetheless gained in power of expression with each successive scene, to finally break our hearts in the ballad ‘Billy in the Darbies’, in which Imbrailo in the end just broke down and brought the matter to its end in the voice of a hurt child – while remaining scarily secure in intonation and flawless in technique. 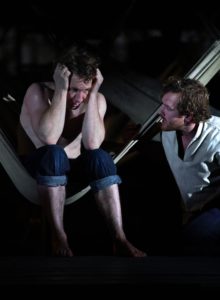 And now it is time to move on to my reservations addressed to the third of the drama’s main protagonists. Deborah Warner, despite her declarations that she intended to place Captain Vere, as it were, between Evil and Good incarnate, actually pushed him into the role of a jaded, pretentious aesthete, a person insufficiently mature for any kind of relationship, devoid of authority, unlearned both in the Scriptures and in the Articles of War, as well as the language of ordinary human desires and erotic preferences. It was grating in purely theatrical terms – when Vere received Redburn and Flint in his cabin in a state of undress, just after getting out of the tub, in his bathrobe; and then yet again, when Billy, summoned to give explanations, unceremoniously sat down on a chair in front of the Captain. I don’t think that Warner was unaware of these codes: I suppose that she infringed upon them purposefully, attempting to focus her vision around the homoerotic triangle of the three main protagonists. What was worse was that the part of Vere was cast with the otherwise superb Toby Spence, who carried his part with a clear, clean voice, quite repulsive in its perfection, devoid of any sign of existential conflict.

And here, finally, I was assailed by doubts of a general nature. Can Billy Budd – like Wajnberg’s The Passenger – be presented in an indeterminate space divorced from historical context? Is this opera, though it bears a universal message, able to speak in a full voice, since the director has pushed the rebellions in the Spithead and Nore anchorages into the background, without helping us to get to the bottom of the drama? I have my doubts, especially when I hear from the stage that the tragic events took place in 1797, a year memorable to any British person well-acquainted with the history of the Empire. My doubts are all the greater that Warner – oddly in spite of Britten’s text – ignored the characteristic gap in the narrative between the announcement of the sentence and Billy’s ballad. The famous ‘Interview Chords’, 34 chords in the orchestra – perhaps the most intriguing clue in the ambiguous ‘matter’ between Britten and Melville – fell into an unexpectedly empty space. Despite Ivor Bolton’s otherwise masterful rendition, they sounded hasty, unreflective, as if the conductor had taken Warner’s suggestion: that there is no secret there, that Vere simply announced to Budd what awaited him, and revealed before the innocent deckhand the boundlessness of his powerlessness and of his egoism propped up by authority. 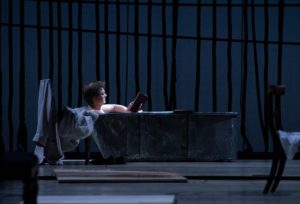 But after all, Bolton had in general handled the narrative with an intuition worthy of the most sensitive interpreter of Britten’s masterpiece. Under his baton, the orchestra sounded softer than in Leeds, especially in the strings; in Billy’s ballad, the flute stumbled and ‘stuttered’ almost as convincingly as in the legendary recording of Hickox; the chorus – prepared by Andrés Máspero – cried out its opposition more boldly and in a fuller voice than at Opera North. However, it looks like the conductor finally gave in to Warner’s brilliant, though fractured concept.

In the epilogue, Captain Vere’s shabby double reappeared. This time, we figured out that the angular object was the Bible on which the witnesses to Claggart’s killing were sworn in. Was the mad Captain really aware of Billy’s final blessing before his death? Did his mistake result from incomprehension of the letter of the Holy Scriptures, or else from the eternal inability to distinguish good and evil, innocence and corruption, love and hate?