Life is too short to waste time on boring performances. This is especially clear to opera house directors, who not infrequently have trouble filling the hall for shows of works from outside a narrow canon – but after all, they would like to put on something more than just La Traviata alternating with Die Zauberflöte. Opera North has decided to do something about this, finding a solution tempting not only to novices, but to discriminating connoisseurs as well. Thirteen years ago, it offered a season under the slogan Eight Little Greats: eight short operas staged by two directors, David Pountney and Christopher Alden, in collaboration with one stage designer, the now late Johan Engels, under the baton of three conductors – Martin André, David Parry and James Holmes. While the shows came in pairs, tickets were sold for individual titles – and that, at half price. It was possible to leave during the intermission or appear only during the interval. Not counting I Pagliacci, only rare works were presented at that time, among others Rachmaninov’s Francesca da Rimini and Zemlinsky’s The Dwarf. The endeavour ended in partial success: the level of the stagings turned out to be uneven, and the individual compositions – despite their modest dimensions – too hermetic and inaccessible to convince undecided parties to fritter away an evening in the company of Les Troyens or Die Meistersinger von Nürnberg.

Opera North has drawn conclusions from that previous lesson and returned to the Little Greats idea in 2017, but on slightly different premises. This time, there were six titles, including three from the warhorse repertoire (Cavalleria rusticana, I Pagliacci and L’enfant et les sortilèges), but combined in classic double-bills. It is another matter that the combinations sometimes turned out to be surprising; besides that, the ‘road shows’ were comprised of different elements from the première shows in Leeds. The common denominator was, once again, the stage designer – Charles Edwards, who in the case of I Pagliacci took responsibility for the entirety of the staging. All told, five stage directors were engaged, and four conductors, including Anthony Kraus, who led L’enfant et les sortilèges alternating with Martin André, a veteran of the 2004 series. Ravel’s lyric fantasy was the only work that audiences could go to separately, as part of a family matinée at the opera. 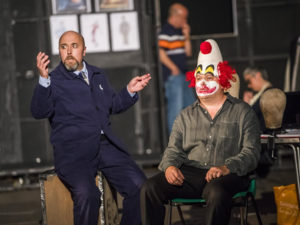 When I looked at the program of Opera North’s autumn season, what I noticed above all was Destiny (Osud) – a very rarely-performed opera by Janáček that I knew only from recordings. In Nottingham, where the Little Greats series ended up at the beginning of November, it was paired with the one-act L’enfant et les sortilèges, presenting in one evening both of the productions directed by Annabel Arden. After thinking about it for a bit, I decided to travel to the capital of the East Midlands – the temptation to see and hear these two pearls at the local Theatre Royal, one of the most beautiful Victorian theatres in the Isles, where the world première of Agatha Christie’s legendary The Mousetrap took place in 1952, turned out to be irresistible. Since I was supposed to come to Nottingham a day early anyway, I decided to go to Cavalleria rusticana and I Pagliacci, presented in a pair as usual, except in reverse order. In this case, I was motivated by curiosity about how Polish stage director Karolina Sofulak had managed with Mascagni’s opera, since she had made the quite bold decision to shift this gory tale from Sicily to the realities of the boorish Polish People’s Republic. Now I regret having forgone the two remaining elements of the series: Leonard Bernstein’s gloomy ‘musical’ Trouble in Tahiti and the comic opera Trial by Jury, one of the first fruits of the collaboration between W. S. Gilbert and Arthur Sullivan, two of the greatest theater stars of Queen Victoria’s era.

Charles Edwards spared no effort to ensure that audiences remembered the Little Greats as – appearances notwithstanding – a coherent series, combined into a whole with numerous, sometimes very ingenious inside allusions. His I Pagliacci plays out in the rehearsal room of a contemporary theatre, on the walls of which hang the designs of the scenery and costumes for all six shows. The frustrated Tonio – the stage designer and, at the same time, director’s assistant – spreads out a mockup of Cavalleria rusticana on the table. The face of the clock from which the Child tore off the pendulum in Ravel’s one-act opera materializes as a symbol of the passage of time in Janáček’s opera. A shabby upright piano wanders from the studio of composer Živný to the room of the unruly Child, in which all of the objects damaged by the Child will shortly come to life. The director of the troupe from I Pagliacci sings the prologue against the background of a curtain with a group picture of the artists, which appears as an immutable prop in all of the shows in the series. 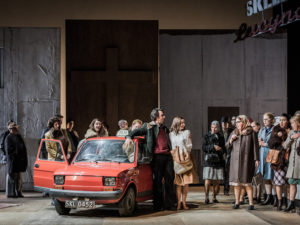 Of the two double-bills I saw in Nottingham, in theatrical terms Destiny paired with L’enfant et les sortilèges came out decidedly better. In Ravel’s fantasy, Annabel Arden’s vivid directorial imagination gained worthy support from both the stage designer and from Theo Clinkard, who was responsible for the stage movement. This is probably the first staging of this opera that I know of in which the contrast between the claustrophobic atmosphere of the child’s room and the seductive horror of the garden bathed in moonlight was so intelligently brought out. The excellently-directed singing actors provoked the audience to attacks of spasmodic laughter: it is difficult to keep a straight face at the sight of the Teapot with a vigorously erect spout between its legs, or the Tree Frog in pitifully stretched-out green stockings; it is even harder to forget the flirtations of the Tom Cat and the Female Cat, maintained in the poetic language of Pink Panther cartoons. Arden had a bit worse of a time with Janáček’s Osud, which is in large measure the fault of the composer, who also co-authored the libretto – it is difficult to believe that almost parallel to Jenůfa, he was creating an opera so dramaturgically incoherent and pretentious in terms of the text. Fortunately, it is not lacking in flashes of true musical genius, brought out by the stage director in Act I, which was played with bravado and at times gave one the impression of watching a Jiří Menzel film. The next two, however, dragged on mercilessly – the introduction of completely baseless allusions to Communist Czechoslovakia in the last one only made things worse.

I treated I Pagliacci in Edwards’ staging rather as an intelligent introduction to the remaining parts of Little Greats than as an innovative attempt to reinterpret the work. Shifting the action to contemporary realities spoiled nothing, but neither did it bring anything particularly new into the story of the bored Nedda, the crazy-jealous Canio and the vengeful, humiliated Tonio. The most interesting things took place in the third plane – among the blasé stage workers, killing time reading newspapers and munching on sandwiches, the distracted choristers and the talkative director’s assistants. Edwards skillfully plays out the details: for instance in the prologue, when the disheveled director walks onto the proscenium with coffee in a paper cup and the shopping in a plastic bag from Sainsbury’s hypermarket. All in all, it was a decent show, consistently planned-out and executed with a bit of a conspiratorial wink, which cannot be said of the deadly-serious Cavalleria rusticana in Sofulak’s staging. I don’t know how my English professional colleagues took it – at times, I had the impression I was watching Bryll’s Christmas Carol Night, and not a verismo opera. I found the gigantic fiberboard cross in the middle of the stage and the little red Fiat with Skierniewice registration plates that replaced Alfio’s wagon somehow bearable. I couldn’t stand Santuzza characterized as Maja Komorowska, or Mamma Lucia selling kiełbasa on ration cards in a shop with yawningly empty shelves, lit up by a red-and-white neon sign reading ‘Sklep Lucyna’ [‘Lucyna Shop’ – in Polish!]. Maybe I am not objective. It is not out of the question that my fellow countrymen and -women abroad get away with such ideas. 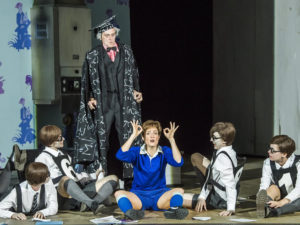 Let us drop a curtain of silence on the unfortunate vision of Mascagni’s opera and focus on the biggest trump card of Opera North’s autumn season: the phenomenal work of the entire ensemble, the commitment of the soloists, the ideal preparation of the chorus and orchestra. The latter came out much better under the baton of Martin André than in the Cav/Pag tandem led by Tobias Ringborg, which does not change the fact that both evenings were well able to satisfy not only a novice, but a spoiled opera connoisseur as well. The star of I Pagliacci was Richard Burkhard, a velvety-voiced, extraordinarily expressive Tonio who turned out the next day to be an equally convincing Lhotský in Janáček’s Osud. The otherwise superb Elin Pritchard (Nedda) and Peter Auty – a Canio with a ‘short’ top register, but sufficiently conscious of his role to bring the audience to its knees with his interpretation of the famous aria ‘Vesti la giubba’ – paled a bit in comparison with Burkhard. Silvio in the person of Rhodes was charming rather in his musicality than in the beauty of his voice – as in the later Cavalleria rusticana, where he portrayed the role of the betrayed Alfio. In Mascagni’s one-act opera, the front runners were the two ladies: Giselle Allen (Santuzza), a superb actress gifted with a dense soprano spinto rich in overtones, and Katie Bray (Lola) – a mezzo-soprano bringing to mind associations with the voice of the young Janet Baker, dark and shimmering like liquid gold. Both of them, furthermore, appeared the next day: the former as Míla in Osud, and the latter in the triple role of the Louis XV Chair, Female Cat and Owl in L’enfant et les sortilèges. Very young, but already showered with awards and sought-after by the managers of the world’s opera houses, Wallis Giunta turned out to be the Child of my dreams – sufficiently boyish in manner, but at the same time, wonderfully fresh in the purely vocal sense. It would take a long time to mention all of the soloists who appeared during these two evenings. So I will just mention two more veterans: the wonderful Britten tenor John Graham-Hall, who made me laugh until I cried in Ravel’s fantasy (as the Teapot, Arithmetic and Tree Frog) and moved me to even more abundant tears in the role of Živný; and Rosalind Plowright, who again disappointed me as Mamma Lucia, but on the other hand completely seduced me as the demonic Míla’s Mother, superb in terms of character and voice, in Janáček’s opera. I don’t understand why this great singer ‘flees’ into mezzo-soprano and contralto roles, since she still has at her disposal a deep dramatic soprano with characteristic sound, brilliant in less physically demanding parts that are, on the other hand, much more difficult in terms of expression. 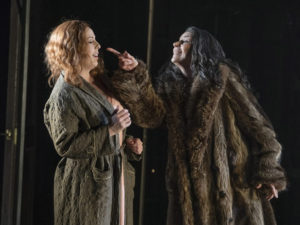 I was at four of the six shows in the Little Greats series. Little shows, but deeply moving. I admit that I was also moved by the attitude of Karolina Sofulak: a stage director who was the only one to break out of the production team and demolish the coherent concept of the whole. And after all, Tonio in I Pagliacci took such tender care of the little red Fiat model that was to play a taxi after the intermission in her Cavalleria rusticana…