I have already wrung my hands so many times over the fate of composers wronged by history and of their operas – unjustly eliminated from the repertoire and returning with difficulty to the world’s stages – that I have no words left for Meyerbeer. This Jew born in Germany, educated in Italy, scoring triumphs in Paris in the heyday of grand opéra’s glory, became the victim of a tangle of exceptionally unfortunate circumstances. Meyerbeer’s downfall was caused by, among others, Wagner – his one-time protégé who at first declared that he owed his mind, heart and lifelong gratitude to him for pointing his creative work in a salutary direction, but after the première of Le Prophète made an abrupt about-turn expressed in, among other things, the infamous pamphlet Das Judenthum in der Musik. And here he had drawn upon this music in fistfuls, not only in Rienzi and Der fliegende Holländer: without Meyerbeer’s Les Huguenots, there would have been no Act II of Die Meistersinger von Nürnberg. Chopin proclaimed Robert le diable a masterpiece right after its Paris world première; a year later, he composed the Grand Duo concertant for piano and ’cello, one of the few chamber pieces in his œuvre, based on motifs from a Meyerbeer opera. Shortly after the success of Le Prophète, Liszt wrote the monumental Fantasy and Fugue on ‘Ad nos, ad salutarem undam’ – the chilling chorale stylization sung by the Anabaptists. Meyerbeer – the father of full-blooded music drama, a peerless master of orchestration, a phenomenal melodist who squeezed the last drop of sweat out of the singers, while never fighting against the natural capabilities of the human voice – fell into oblivion together with the twilight of grand historical opera; and since he had taken that genre to the limits of perfection, with the passage of successive decades, hopes for the resurrection of his œuvre grew dimmer. Meyerbeer’s operas disappeared from stages even before World War I. The last Polish production of Les Huguenots took place in 1903 in Lwów [modern-day Lviv, Ukraine]. 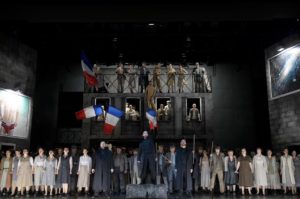 Le Prophète, which once triggered a veritable paroxysm of composer’s envy in Wagner, is today mentioned above all anecdotally: as the work whose 1849 world première featured the Paris Opera stage lit for the first time in history with electric lamps, as well as dancers on roller skates in the ballet on the frozen lake at the beginning of Act III. The fact that Meyerbeer wrote the mezzo-soprano role of Fidès for Pauline Viardot, a distinguished singer and pianist, a student of Liszt and Anton Reicha, the latter of whom introduced her to the mysteries of composition, a polyglot and writer, a friend of Turgenev and Clara Schumann; that the creator of the libretto was Eugène Scribe, one of the most prolific and sought-after authors of the time, who also contributed to the successes of Robert le diable and Les Huguenots; that the subject matter of the opera fit ideally into the atmosphere of moods after the February Revolution and the bloodily suppressed June Days uprising of 1848, the failure of which put an end to the Spring of Nations in France – these things are mentioned, as it were, less often. The story of Jean de Leyde [John of Leiden], the Anabaptist leader who – after the imprisonment of Melchior Hofmann, who had proclaimed the coming of the Kingdom of God in 1533 – decided to take matters in his own hands and institute the Parousia by force, brought to mind inevitable associations with the views espoused by Utopian communists who demanded recognition of the role of the proletariat and the establishment of a classless society. The libretto of Le Prophète is gloomy; the love thread, pushed into the background; the motif of a mother loving her wayward son despite all circumstances, highlighted beyond normal measure; and the character of the protagonist, boiled down to an anti-hero role bringing to mind associations with the considerably later operas of the great Russians: Mussorgsky and Tchaikovsky. Le Prophète poses a multitude of performance problems and, at the same time, is hellishly complex in dramaturgical terms. It is no wonder that it has only sporadically returned to contemporary stages and then quickly disappeared. There is no way to modernize it, nor to produce it with its original splendour – not to mention the difficulties of finding appropriate singers. 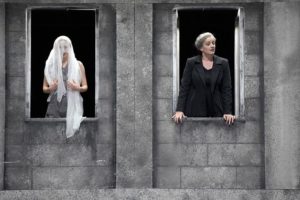 Almost everyone has now forgotten the first resurrection of Le Prophète on the stage of Deutsche Oper Berlin in 1966, with Sandra Warfield as Fidès and James McCracken in the role of Jean. The staging of the opera’s most recent première was entrusted to Olivier Py, a French director known for religiosity as well as for a tendency to introduce contemporary political allusions into his productions. In his famous Paris Aida of four years ago – to the horror of some critics and audience members – there appeared Ku Klux Klan fighters, Holocaust victims, immigrants, as well as an impressive-looking, camouflage-painted tank. His concept of Le Prophète, though equally over-simplified, turned out to be considerably more coherent: Py set the opera’s action in the realities of an indeterminate metropolis shaken by unrest, in which all of the pathologies of revolution are concentrated: physical and psychological violence, debauched sex and equally frisky religious fanaticism. It is not at all bad to watch – even, wonder of wonders, in the famous skaters’ ballet scene, played out in the form of a brutal pantomime on a rotary stage spinning at a frenzied tempo. Certain details, however, are a bit offensive – above all, the forcible introduction of the stage director’s ‘signatures’ (a half-naked angel taken, as it were, straight out of Mathis der Maler at Opéra Bastille; the final orgy in bordello red lighting; anal sex on the hood of a car – a hackneyed idea, though at least automobile lovers had the pleasure of admiring a black Mercedes W115, known in Poland by the pet name of puchacz [‘eagle owl’]). I must admit, however, that the action played out fluidly, the stage movement did not disturb the singers, and in the healing of the sick scene – accompanying Jean’s coronation in Act IV – the wheelchairs finally found proper use. 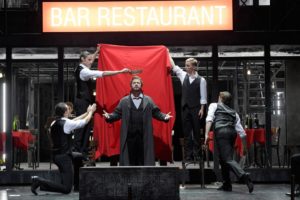 But never mind Olivier Py’s controversial concept – we got a show so superbly prepared in musical terms that Wagner probably had apoplexy yet again, this time in the hereafter. Enrique Mazzola, an Italian bel canto specialist, brought every possible treat out of the score: wonderfully transparent textures, surprising details of orchestration, deep dynamic contrasts. He took Le Prophète at lively tempi, without even for a moment losing the pulse of the work as a whole, deftly highlighting Meyerbeer’s thematic play (the phenomenal entrance of the three Anabaptists with a pseudo-chorale that appears in distorted form in Act II, when Jean tells about his dream, rolls through the chorus part like a storm in Act III, and then returns as an ominous memento during the coronation scene). What turned out to be the second, collective hero of the evening was the chorus, prepared by Jeremy Bines, which sang with alertness, as well as beautiful, fluent phrasing and superbly rendered text. The third, perhaps brightest star of the show was Clémentine Margaine: her mezzo-soprano, thick as tar and velvety in sound, flowed forth with such freedom that everyone in the audience forgot about the legendary reefs and shoals in the extremely difficult role of Fidès. The light and bright soprano of Berthe (Elena Tsallagova) blended quite well with it, though in the duets, especially ‘Pour garder à ton fils le serment’, the young Russian did have a few slip-ups in intonation. Gregory Kunde (Jean) took a long time to warm up, to the detriment of my favorite aria ‘Pour Berthe, moi je soupire’, but in the triumphal hymn from the finale of Act III (‘Roi du ciel et des anges’), I felt like getting up from my seat and accompanying the false prophet. Kunde has superb technique; nonetheless, his top register lacks freedom and the spinto brilliance essential for this part – another matter that I’m not sure if anyone besides him today would be in a position to sing this role even decently. Of the three sinister Anabaptists – superbly chosen in every way – Derek Walton (Zacharie) stood out. Walton has at his disposal a beautiful, round bass-baritone, though unfortunately not sufficiently resonant at the bottom of his range. The only disappointment was Seth Carico in the role of Le Comte d’Oberthal – perhaps because a few months ago, he was so enchanting in Death in Venice. This time he too often fell into a caricature that concealed deficiencies in the musical preparation of his part.

A production of any Meyerbeer opera at such a level requires enormous financial expenditures and tons of solid work. The occasion to obtain the former was no doubt the riotously celebrated 500th birthday of the Reformation. The zeal and professionalism of the musicians, however, cannot be overestimated. There is hope. A pity that not here in Poland, where even musicology professors are afraid to reveal their love for the composer in whose work – as Chopin wrote in a letter to Tytus Wojciechowski – ‘through the tuba sings the devil, souls from graves rise up to revel’.