‘And his raiment became shining, exceeding white as snow; so as no fuller on earth can white them,’ we read in Mark’s Gospel. The Transfiguration on Mount Tabor was a real Verklärung. A terrifying brightness blinded Jesus’ three disciples and filled them with fear mixed with awe. It took them into another dimension, the brilliance of which icon painters have brought out via contrast, juxtaposing it with an image of a black sun. Wagner’s Tristan arrives from the world of night. And Wagner’s Dutchman, from the mists of the past, on a ship with black masts and sails as red as blood. Neither of them will find happiness in the human world of daylight. Both will unite with their loved ones through death and transfiguration, thanks to the redeeming power of love. In the finale of Der fliegende Holländer – amended by the composer in 1860, a year after finishing work on Tristan – we shall hear a luminous cadence bringing to mind inevitable associations with the final bars of Isolde’s Liebesverklärung. The darkness recedes, the music pulsates with a blinding brilliance, the audience freezes in silent awe. At least that is how it should be.

This time, I decided to combine my annual pilgrimage to Longborough – that is, the ‘English Bayreuth’ – with a visit to the ‘Bayreuth on the Danube’. The Budapest Wagner Days – initiated in 2006 by Ádám Fischer at the newly-opened Palace of the Arts, the design of which alluded loosely to the premises of the Centre Georges Pompidou in Paris – have over the ensuing years built themselves a reputation as one of the major festivals of the German master’s music. From the beginning, Fischer set himself the goal of competing with the Wagnerian theatre on the Green Hill. At the Palace of Arts, since 2014 called Müpa Budapest, he has at his disposal the Hungarian National Philharmonic Orchestra (excellent, though not as good as the Budapest Festival Orchestra conducted by his younger brother Iván) and the Béla Bartók Concert Hall – with a concert stage that can be transformed into a quite expansive opera stage with orchestra pit, which permits Wagner’s works to be presented almost as if in a ‘real’ theatre. The big attraction for the audience is, above all, the names of the singers, which Fischer can take his sweet time choosing – though it is hard to call him an experimenter. Budapest is thus visited by often no-longer-young performers who have associated with this repertoire for years. This was also the case with this year’s Tristan, in which the title role was entrusted to Peter Seiffert, and the character of King Marke was portrayed by Matti Salminen. Anja Kampe (Isolde), announced in the original program, was replaced at the last minute by American soprano Allison Oakes, who among other things is preparing to appear in the dual role of Elisabeth and Venus in Tannhäuser next season on the stage of Deutsche Oper Berlin. 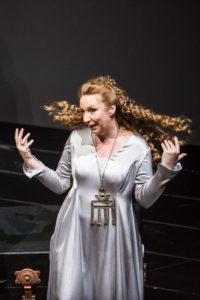 After last year’s Tristan with the Longborough Festival Opera, which will long – and perhaps forever – remain the model production for me, I traveled to Budapest full of anxiety. Some of them turned out to be justified, most of them turned out to be baseless, but most importantly: what awaited me was a short, unexpected and shocking experience on the order of my impressions from the little Bayreuth in the Cotswolds. I shall begin with the disappointments to put them behind me: the six creators of the staging (director Cesare Lievi, stage designer Maurizio Balò, costume designer Marina Luxardo and the three people responsible for the lighting and video projections) managed to litter the stage of the Müpa with a ton of distracting objects and images, while the singers were basically left to their own devices, at times indeed making it difficult for them to build dramatic tension. As a result, Tristan’s acting was limited to sitting and lying on an enormous purple sofa taken, as it were, straight from a Turkish lounge furniture catalogue (furthermore, the sofa gradually disintegrated: in Act II, it began to tip dangerously; and in Act III, all that was left of it was the frame), and the rest of the singers – though somewhat more mobile – did not enter into any relationships with each other. Furthermore, it would be tough to find that surprising, given that the protagonists had to perform their great duet against a background of colorful projections with jellyfish and seaweed, and Tristan’s death scene was dominated by a thicket of leafless trees undulating on the screen. Another thing that would have looked even worse in a real theatre, so I really shouldn’t complain. 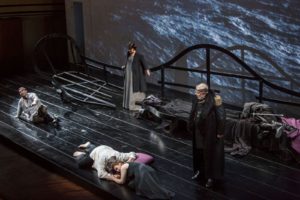 The playing of the Hungarian Philharmonic largely made up for the deficiencies in the staging. Ádám Fischer treats Wagner’s material completely differently from Krauss, Böhm or Negus – in terms of both the shaping of the architecture, and the building of the narrative as a whole. Instead of diversifying the colours, he consciously unifies them, avoids drastic expressive contrasts, ‘smooths’ the edges, doesn’t pour out the tale in a broad stream, but rather divides it up into smaller, self-contained mini-stories. But he has under his baton an ensemble sufficiently alert that such an interpretation is not disturbing to the ears, especially since the music flows forward quite fast, without getting bogged down in musical verbiage. In purely vocal terms, Fischer chose a dream cast: every role, even the most episodic, was assigned to a stylish performer with flawless technique. However, I would have preferred that Seiffert – astounding in the freshness of his tenor and very convincing in Act I – have taken more of an interest during Act III in his character’s inhuman suffering; and that Oakes – gifted with a dense and dark soprano – have really let us feel that she was experiencing a luminous transfiguration over the dead body of her beloved. I don’t know in what measure this is the stage director’s fault, and in what measure the conductor’s, because all of the soloists in the production struggled with similar problems in drawing their characters. With the sole, riveting exception of Matti Salminen, who managed to combine everything in King Marke’s monologue: imperious dignity, crushing disappointment and a desperate desire to understand something to which he has no access. The venerable Finnish bass gave us a creation complete in every inch which will long – if not forever – remain in my memory as an unattainable model of deep interpretation marked by the wisdom of age.

Two days after the Budapest Tristan, I landed in the bucolic scenery of the Longborough Festival Opera, which presented Der fliegende Holländer, the first of the season’s four productions, on an incomparably smaller budget. In all Wagnerian endeavours under Anthony Negus’ baton, one senses an extremely different approach to the matter: the music director of the LFO chooses the cast of his shows from among singers less well-known yet completely fitting into his vision of the work. And he works with them until they drop – as with the orchestra – polishing every phrase, bringing out all of the ‘peculiarities’ from the score, without trying to tailor them to the contemporary listener’s tastes. What I could expect from a Holländer in Negus’ interpretation, I already more or less knew after his appearance last year on the podium of the Philharmonisches Orchester der Hansestadt Lübeck. I got the same, but with interest. An overture in which – despite sporadic slip-ups in the brass – the wind basically smacked one in the face, the sails flapped, and the keel creaked under pressure from the water. The score’s Weberisms and Marschnerisms, highlighted with charm and all the more distinctly showing the contrast between the conventional world of ordinary mortals and the lushly Romantic, extremely individual musical language of the two protagonists. The superbly-prepared choral scenes, especially the beginning of Act III, in which Negus several times juxtaposed a deadly silence with a desperate fortissimo – thereby obtaining an effect worthy of the best horror films.

The revelation of the production turned out to be New Zealand’s Kirstin Sharpin in the role of Senta – a prizewinner at the Internationaler Wettbewerb für Wagnerstimmen in Karlsruhe and holder of a scholarship from the British Wagner Society, gifted with a sonorous soprano, of extraordinarily gorgeous timbre and beautifully open in the upper register. Simon Thorpe (Dutchman), phenomenal in terms of character, took a long time to warm up, to the detriment of the monologue ‘Die Frist ist um’ from Act I – nevertheless, in the ecstatic duet ‘Wie aus der Ferne’, he and Sharpin both reached the heights of vocal expression. A clear contrast with Thorpe’s gorgeous baritone was created by the deep and slightly gravelly bass of Richard Wiegold (Daland), set in the Singspiel convention. The indisposed Eric Stoughton had a few difficult moments in Act III: that said, it has been a long time since I have heard such a convincing Erik, telling his prophetic dream about the mysterious visitor (‘Auf hohem Felsen’) with such sensitivity and musicality. Separate words of praise are due to Carolyn Dobbin in the role of Mary, and especially to William Wallace, whose youthful, heartbreakingly lyrical Steersman brought to mind the Dutchman back in the days before he was cursed to wander eternally.

All of these musical miracles played out in an intimate space developed by stage director Thomas Guthrie, stage designer Ruth Patton and the inestimable Ben Ormerod, responsible for the stage lighting. Yet again, I have the impression that the creators of the Longborough productions are paying homage to the visionary ideas of Wieland Wagner from the golden seasons in Bayreuth. On a nearly empty stage painted with lighting, what reigns is theatrical illusion. Daland’s non-existent ship arrives on a non-existent coast, but despite this, we follow with suspense the sailors’ manoeuvres suggested by a slow parade of extras floating across the back of the stage, carrying the entire port city in their hands: miniature models of houses, a church, a lighthouse. The ghostly voices of the Dutchman’s sailors in Act III waft in on a primitive Bush transistor radio. Just before Senta’s ballad, when the musical narrative freezes in unbearable suspense, Mary nervously winds thread onto a spool – in the rhythm of the clearly accented, ostinato figures in the strings.

‘This is theatre. / And theatre exists / so that all will be different from before,’ wrote the recently-deceased Joanna Kulmowa in one of her poems. So that we will see in a ladder – a stairway to heaven; and in a bowl under the stairs – the moon. So that we will all experience transfiguration and rise above the earth in a dazzling blaze of rapture. Success again in Longborough. I have a feeling there will be success next year in Budapest too.