If it was not for the tragedy that happened less than a half a year after our return, I would have remembered Afghanistan as a land of surprising colours, amazing scents, and above all outstanding people – mature above their age, tireless in the pursuit of their aims, sensitive and responsible. We had a unique occasion to enter their community and enjoy its kindnesses: we, two teachers from the West, carrying out our original teaching programs with a group of teenagers in a school in the remote countryside, we who were guests in the house of a local social activist for several months. As it turned out, despite long and seemingly professional preparation, we came to Afghanistan with a burden of countless stereotypes. I had written about it in my reportage Good Desert: about the bias of noble mujahideens and cowardly Talibans; about the sexist stereotype of a woman hidden under burqa by her jealous man; about the feminist stereotype of a woman enslaved by a traditional division of masculine and feminine roles. We left this place with clear heads, full of hopes for the future. We did not even think that the most deeply rooted bias – the stereotype of a coloniser, the goodhearted visitor muzzling the native population with education – will let down our guard and will put our Afghan host at risk of vengeance by the people who had seen us as intruders from the beginning.

And so the memories from Afghanistan were outshouted by a desperate cry of a daughter who called me from the other corner of the world, lamenting over her father’s corpse, who died just a moment ago in an assassination. In that moment, I have changed my perspective on educational and aid campaigns in countries at war. I am distrustful towards initiatives that are undertaken far away from the injustices they are aimed against, the injustices that mainly target children and women. I share the doubts of female activists of Afghan local organizations – such as members of RAWA, the Revolutionary Association of the Women of Afghanistan, who accuse Western feminists of protectionism and narrowing down their horizons merely to problems existing in their culture. When Krystian Lada, a director, librettist and dramaturge, known for his work in the Great Theatre—National Opera in Warsaw and Wrocław Opera (Poland), invited me to Brussels to watch the opera-installation Unknown, I Live With You, I accepted the invitation immediately, but certain doubts remained. I knew from the start that the libretto would be based on poetry of anonymous Afghan women, members of  New York-based the Afghan Women’s Writing Project, supported by RAWA. I was worried that their shocking confessions would disappear in the flood of cheap journalism; instead of opening people’s hearts to the experience of Afghan tragedy, they would strengthen the belief in our superiority over the cursed civilisation of the barbarians.

The day before the premiere, straight from the airport, I went to the dress rehearsal to Les Brigittines – a former chapel of Bridgettines, desacralised in the end of 18th century and for over 200 years used as: a storage place, an arsenal of weapons, a prison and a marketplace with a ballroom on the second floor; and finally converted to the Centre d’Art contemporain du Mouvement et de la Voix. The centre started its activity at full speed in 2007, after maintenance works of the interior of the baroque temple and building of an additional annex with a modern edge, designed by Italian architect Andrea Bruno. I entered this space in the dark, surrounded by the music of Katarzyna Głowicka: minimalistic, hazy, but at the same time bursting with underlying emotion. A moment later, from the sounds of string quartet and live electronics, human voices emerged – the register-wandering voice of Lucia Lucas and the poignant scream of dancer Gala Moody. All good and bad memories from Afghanistan crossed my mind. The trauma was back. My doubts were gone. I knew already that the next day I will come face to face with the musicians, who profoundly experienced the tragedy of Afghan women and do not want to just reinterpret it, but to simply understand it.

Each of the three parts of this piece of music is sung by a different opera singer and each reveals a different story, woven from the poetry of a few Afghan women (hiding under aliases: Roya, Meena Z., Fattemah AH and Freshta). Małgorzata Walewska personated the role of a woman deprived of dignity, in a forced marriage, degraded as a human being. This creation is more harrowing than many performances in the “real” opera. Rape, violence and experience of motherhood are tackled in the appearance of the aforementioned Lucia Lucas – herself a transgender woman who inherited from her past incarnation a masterfully guided  velvet bass-baritone voice (in this part of triptych it is interwoven with a falsetto, which gave a seismic effect of a dialogue between executioner and his victim, in one person). Raehann Bryce-Davis, phenomenally talented mezzo-soprano singer with a thick, specific “black” voice, after a short prologue began an eerie grievance of a girl wounded in an explosion. Her lamentation grew, it peaked, it died down, and then it finally unloaded in a quasi-ballad about wild car driving – a dream of many young Afghan women, especially in the countryside, who are not allowed to drive due to the custom. 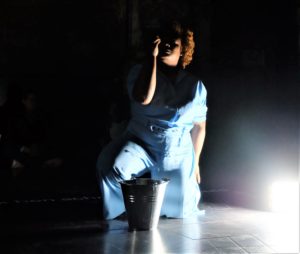 To shook the listener, the poetry would be enough, accompanied by a well-fitting music and altogether creating a coherent dramatic whole. Nevertheless, the authors went a step further. Krystian Lada and other authors of the installation (Natalia Kitamikado – production design; Maarten Warmerdam – lighting; Pim Dinghs – video projections) placed the narrative in a space resembling a morgue. The performers, including the members of The Airport Society String Quartet (Tomasz Aleksander Plusa, Aleksandra Kwiatkowska, Clara Sawada and Natania Hoffman) and music director Pedro Beriso, are dressed in blue, hospital gowns. Everyone, except for the dancer, but I will come back to that in a moment. On the black floor of the chapel merely a few props: a movable metal cart, a galvanized bucket with water and a sponge. On the cart Gala Moody, deadly pale, lies down in a nude-colored leotard. The corpse evokes imagination of the narrators whose profession is corpse washing – the act that is at the same time tender and deeply degrading. The dead, who upon hearing their poetry comes back to life, cries in pain, defends itself from rape, looses legs, in the finale strongly pushes the metal cart – as a substitute of real car ride. That is the reality of everyday life in Afghanistan destructed by conflicts. There, no one knows what is the border of death. No one knows if life even differs from death. 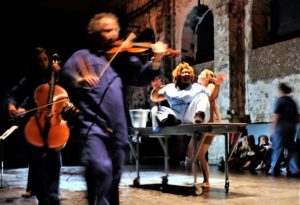 After such an experience it is hard to talk about joy, but I cannot name otherwise this overwhelming feeling of seeing the reaction of the other spectators – those curious, often unaware participants of Brussels’ Nuit Blanche (the Museum, Gallery and Theatre Night in one). They cried. They closed their eyes. The more and more people were showing up on succesive parts of the Unknown. Maybe they will understand one day that Afghanistan is not a country from which one brings pictures of savages in turbans and boys armed with Kalashnikovs. It is a country that was humiliated, profaned, degraded. The country in which the ideas of good and bad, of friendship and hostility have a much different meaning than in the West. Helping this country is as hard as helping a woman that was raped. And this country needs the help as desperately as she does.