Every year with an eight at the end – the so-called “osmičkový year” – is a time of important anniversaries for the Czechs. Mostly bleak anniversaries. In May 1618 two imperial envoys and their secretary were thrown out of a window of the Hradcany Castle. The victims of the second Defenestration of Prague (or, in fact, the third, because the second one, of 1483, is hardly mentioned by Western historians) did not suffer much, but the incident led to the outbreak of the Thirty Years’ War. In March 1948 the body of the then Foreign Minister, Jan Masaryk, was found next to the building of the Ministry of Foreign Affairs – a month earlier the Communist Party of Czechoslovakia had seized power in the country, following a coup d’état. An official investigation delivered the verdict of suicide, but the Czechs knew better and, as it turned out, they were right. The accident during which Masaryk “jumped out of the top floor of the Ministry of Foreign Affairs, closing the window behind him”, was regarded as a political murder and became known as the third defenestration. August 1968 was marked by the beginning of Operation Danube, a fraternal invasion of the Warsaw Pact forces, which put an end to the Prague Spring.  In August 1928 Janáček went on a trip to Štramberk with Kamila Stösslová and her son, caught a cold, then went down with pneumonia and died – in Doctor Klein’s sanatorium in Ostrava. Ten years later Czechoslovakia was forced to accept the terms of the Munich Diktat, as a result of which Germany seized the Sudetenland and northern Moravia, while Poland took Zaolzie.

It might seem that it is difficult for the Czechs to celebrate even the centenary of their independence, as the state proclaimed on 28 October 1918 has long ceased to exist. Fortunately, our southern neighbours have both a sense of humour and distance from their own history. When Ostrava was preparing for a parade of historic vehicles and was building a replica of a city district from the 1920s, the city was decorated with posters advertising the Leoš Janáček Music Marathon featuring a long-distance runner with the composer’s head, headphones in his ears and starting number 100 on his tank top. The programme of the four-day festival, launched by the local Philharmonic, featured sixteen concerts (including three outside Ostrava) and one opera performance – in total, forty works by the patron of the festival performed exclusively by the natives. For our southern neighbours have another pleasant character trait – they are authentically proud of their musical heritage, have magnificent performing traditions and no complexes whatsoever. In other words, when an important jubilee approaches, they do not have to inaugurate it with a concert featuring foreign stars. They will play and sing their Janáček themselves – and will usually do it better than many imported musicians of international renown. 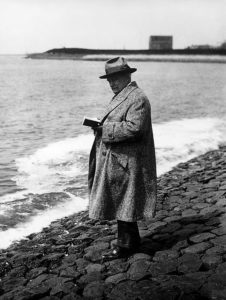 This is all the more remarkable given the fact that the Ostrava Philharmonic Orchestra does not even have a decent concert hall. It will have to wait for it until at least until 2023, after a competition, whose entrants include the Katowice-based architectural Konior Studio, has been decided. In the meantime the orchestra works and performs in the local Culture Centre (DKMO) – a gloomy relic of a bygone era, erected in the late 1950s after a socialist realist design by Jaroslav Fragner, an otherwise excellent architect, who parted with the aesthetics of functionalism for good after the war. Chairs in the auditorium are placed as needed, the organ case is installed diagonally by one of the walls, sound travels as it wishes – and yet the six concerts at the DKMO played to a nearly full house, while the performers and organisers worked miracles to curb the capricious acoustics of the interior.

I came to Ostrava to attend the whole marathon and listen to as much Janáček as I could. The regrettable absence of this composer from Polish opera houses and concert halls is something I write about whenever I can (let the Czechs not be misled by the guest appearance of Poznań’s Teatr Wielki at this year’s Janáček Brno Festival: Jenůfa was added to the repertoire of the Poznań company primarily because of Alvis Hermanis’ famous staging). The situation is much better in other countries, but no one has come up with the idea of organising a separate festival devoted to Janáček with a programme featuring compositions rarely performed even in the Czech Republic (e.g. juvenile pieces for string orchestra and Žárlivost, still “Dvořákian” in spirit, which was initially intended as an overture to Jenůfa). Even the best staged and musically perfect operas will not seduce the listeners with the unique melody of the Czech language, which can be conveyed only by Janáček’s compatriots. The same applies to songs, choral works and oratorios. Less obviously, the Czechs do not give in to the temptation to “prettify” his instrumental oeuvre, which in most foreign interpretations sounds too smooth, too rounded, without properly highlighted colour effects and textural contrasts. 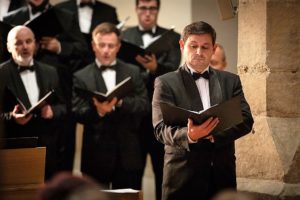 I will long remember the performance by the Pavel Haas Quartet, especially their interpretation of String Quartet No. 1 “Kreutzer Sonata” – aggressive, sometimes violent, using broad bow strokes to paint a musical picture of a conflict between corporeality and need for true affection. The mastery of the four Prague musicians found an excellent acoustic setting in this case: the concert was held in one of the buildings of the former Hlubina coal mine in Dolní Vítkovice, a huge industrial site  included in the UNESCO World Heritage list. Once again I was able to see that the best conductors are recruited from among truly versatile musicians – Ondřej Vrabec, who conducted the Ostrava Youth Orchestra and the wind Marathon Ensemble during two concerts at the DKMO, is also an eminent French horn player, a soloist with many orchestras, including the Prague Philharmonic Orchestra, as well as a member of the PhilHarmonia Octet and Brahms Trio Prague. I was able to admire the enthusiasm and youthful virtuosity of Jan Mráček, who two days after his dazzling performance in Dvořák’s Violin Concerto led the Janáček String Orchestra from the pulpit in Idyll and Suite, the patron’s youthful works; I also admired the profound emotionality and architectural mastery in the playing of Jan Bartoš, a brilliant interpreter of Janáček’s piano legacy. What brought me the greatest joy, however, was Czech singing. At a concert at the Church of St. Wenceslaus the tenor Tomáš Kořínek and the Czech Philharmonic Chorus from Brno, conducted by Petr Fiala,  treated me to a very interesting polonicum: five-part Otčenáš inspired by a painting cycle by Józef Męcina-Krzesz, who was so mercilessly mocked by Boy-Żeleński in his A Word or Two (“Whole Poland on this day rejoices afresh / While singing loud praises to Kręcina Mesz”). After his slightly underwhelming performance in The Eternal Gospel at the opening evening, Ľudovít Ludha, an experienced tenor, bowled me over completely in Zápisník zmizelého with a performance that was spot-on when it came to Janáček’s vocal idiom. Kateřina Kněžíková, a singer with a bright, beautifully open soprano, and Roman Hoza, who added to it his velvety, very lyrical baritone, gave a magnificent concert of Moravian and Hukvaldy poetry in songs – I was consumed with envy, because, listening to two Czechs, I could understand more than when listening to Karłowicz’s songs interpreted by many Polish singers. 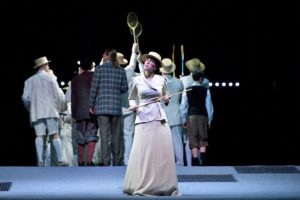 There was also a moving trip to the nearby village of Hukvaldy, where the composer was born. We were accompanied by Jiří Zahrádka, the curator of the Janáček collection at the Moravian Museum in Brno and author of many critical editions of his works, including Osud. I saw this three-act opera for the first time last year at Opera North. Despite an excellent cast and fine orchestral playing I was inclined to agree with most musicologists that it is one of weak items in Janáček’s oeuvre. In Ostrava I began to appreciate the unique dramaturgy of the piece – more thanks to the music than the conventional and not quite polished staging by Jiři Nekvasil at the National Moravian-Silesian Theatre. After less than ten days from the premiere the soloists had not yet eased into their roles (especially Josef Moravec singing the fiendishly difficult part of Živný) and the orchestra, conducted by Jakub Klecker, did occasionally stumble – but it was a genuine Janáček, without unnecessary alterations, swinging between drama and grotesque, with a plethora of brilliantly drawn characters and excellent dialogues. I have long been saying that Polish directors do not tackle Janáček, because none of his operas can be dismissed as a silly story.

The marathon ended on the centenary of the proclamation of Czechoslovakia’s independence. The Philharmonic Orchestra was conducted by Jiří Rožeň, a young and promising conductor. There was the national anthem, there were the official speeches – short, to the point and not read out – there was Taras Bulba (not played in Poland also for patriotic reasons) and at the end a truly rousing rendition of Sinfonietta, one of the greatest masterpieces of musical modernism.  I really envy the Czechs: they can celebrate their jubilee with a piece known to any cultured citizen of the world, if only from reading Haruki Murakami.