There is no joking around with Die Zauberflöte. At least in Germany, where every self-respecting opera house has this masterpiece in its repertoire. To date, Berliners have been able to choose among August Everding’s canonic staging with scenery alluding to Karl Friedrich Schinkel’s designs from 1816 (Staatsoper), Barrie Kosky’s madcap version in the silent film convention (Komische Oper), and Günter Krämer’s elegant and clear concept playing at the Deutsche Oper since 1991. The youngest audiences begin their education with Die Zauberflöte. Adult opera lovers treat it as one of the nation’s sanctities. Theatre directors use it to open the most important seasons. Student Benno Ohnesorg, a participant in a demonstration against the Shah of Iran’s visit, died taking a bullet from the police on 2 July 1967 in front of the Deutsche Oper building in Berlin – where Mohammad Reza Pahlavi, unaware of the tragedy in progress outside, was enjoying a performance of Die Zauberflöte.

Musicologists and theatre connoisseurs have been trying for years to solve the mystery of Mozart’s last opera – with its libretto so incoherent that at moments it barely holds together, but nonetheless captivating in the panache of its compositional genius. To make the matter even stranger, the score of Die Zauberflöte is also anything but homogeneous. The work includes everything: tragedy and buffo of the most diverse varieties, stanzaic songs and a Lutheran chorale, showpiece arias, grand choruses and masterfully-constructed ensembles. Despite its evident affinities with folk theatre and the Zauberoper convention fashionable in Vienna at the time, it is dogged by rumors that it is really a Masonic parable with a hidden message. Researchers point in vain to other sources of inspiration: chivalrous romances, Abbé Terrasson’s fantasy novel Sethos, Christoph Martin Wieland’s educational fairy tales from the Dschinnistan series. In the opinion of defenders of Mozart’s honour, the image of the composer laughing his head off at productions of the Freieshaustheater in suburban Vienna and, together with Schikaneder, writing a comedy for the enjoyment of the rabble somehow does not befit the dignity due to a masterpiece of this stature. 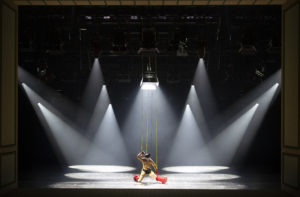 It is perhaps for this reason that the most recent première at the Staatsoper Unter den Linden was slammed mercilessly by the critics. Because for his Berlin debut, stage director Yuval Sharon (with whom, among others, Polish dramaturg Krystian Lada has collaborated) decided to strip Die Zauberflöte of the forcibly-attributed over-interpretations and meanings it has accrued over the centuries. He saw in it what was most important: a simple and, at the same time, powerful coming-of-age tale of maturation into feelings and responsibility. So simple as to be understandable even for a child who has never heard of the Freemasons, Isis or Osiris. Sufficiently powerful to speak to any adult who has retained even the tiniest bit of youth. In short, close to the original intentions of Mozart and Schikaneder, who had whipped up a sort of 18th-century Sesame Street – something understandable to all regardless of age or education, instructive, giving rise to emotions, but for the most part irresistibly funny.

To achieve his aim, Sharon put himself in the position of a child – or rather, a group of children who are putting on a production of Die Zauberflöte. He invited the audience into a home theatre blown up to the size of the Staatsoper stage, in which scribbled-up pages from a colouring book and photos torn out of newspapers serve as scenery; puppets, toys and hand shadows, as the characters; and as props essential to the narrative, whatever is at hand – let us agree that that plastic rocket will be the magic flute. All of the spoken parts (with the exception of the text spoken by Papageno) are performed by child actors. Mimi Lien’s stage design is as heterogeneous as the phenomenal costumes of Walter Van Beirendonck, who has ‘dressed up’ Tamino as Astro Boy from the film inspired by Osamu Tezuka’s manga – but given him a wooden body and hung him up on strings like a Pinocchio marionette; the Three Ladies in Act I, he has turned into a collective puppet with a single pair of arms and legs, but three heads and three monstrous breasts; Monostatos (in the form of a black wind-up robot) and his team, he has stylized as the Bauhaus puppets of Oskar Schlemmer and Paul Klee. A detailed discussion of Sharon and his team’s staging ideas would take up more than an entire review – despite this, I did not even for a moment have any impression of chaos. With increasing excitement, I immersed myself in a world of vivid childlike imagination, and gradually regained a youthful sensitivity to symbolism. 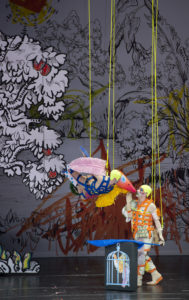 This is why I was so shaken by the despair of Pamina, who tried to kill herself by cutting her marionette strings. This is why I reacted in such a fresh manner to the tried-and-true theatrical effect when all of the curtains fell and Sarastro sang ‘In diesen heil’gen Hallen’ in an empty proscenium, facing the brilliantly-illuminated audience. This is why I had nothing against the trial by fire and water taking place in a kitchen – I myself remember what a huge experience it was to light my first match under the gas burner and wash the dishes by myself for the first time. The coming-of-age tale more powerfully reaches the viewer brought down to the level of a naïve child.

After the première, Austrian actor Florian Teichtmeister – cast in the role of Papageno – took a completely unjustified beating. All for naught the extensive explanations that the creators were thereby returning to the original staging idea: at the Vienna première, after all, the role of the peculiar birdcatcher was played by Schikaneder himself, making full use of the comic potential of this character derived from German folk theatre. Teichtmeister, furthermore, displayed not only masterful acting, but also extraordinary musicality, especially in the ensemble fragments. The rest of the cast did their job at very least properly. If anyone was disappointing, it was the vocally quite bland Monostatos (Florian Hoffmann); the performance of Sarastro (Kwangchul Youn) could also have done with more authority and fullness of sound. Having a clear, ice-cold soprano at her disposal, Tuuli Takala was impressive with precise and clean coloratura in the Queen of the Night’s aria from Act II. Of the two very young singers in the roles of Papagena (Sarah Aristidou) and Pamina (Serena Sáenz Molinaro), noteworthy is above all the latter, substituting for the indisposed Anna Prohaska and gifted with a voice not particularly large, yet meaty and beautifully rounded in timbre. The Three Ladies (Adriane Queiroz, Cristina Damian and Anja Schlosser) were somewhat lacking in coherence, for which I was fully recompensed by the beautiful blending and superbly enounced text of the Three Boys from the Tölzer Knabenchor (unfortunately, not mentioned by name in the programme). A phenomenal performance was turned in by Julian Prégardien in the role of Tamino. The son of the famous Christoph has decidedly more ‘brass’ in his voice than his father; his phrasing is splendid, he realizes the ornaments with gusto and great sensitivity – his luminous vocal production at moments reminded me of Fritz Wunderlich in his youth. 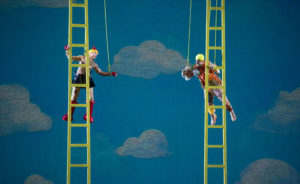 At the second performance, one could get the impression that the audience was trying to recompense the artists for the crushing response of those in attendance at the première. All the greater applause was due to the creators and performers of the production, in that their efforts were effectively thwarted by the only anti-hero of the evening: Mexican conductor Alondra de la Parra, who took over the baton at the last minute from the injured Franz Welser-Möst. The hybrid score of Die Zauberflöte requires solid technique, enormous musical imagination and feel for style. The Mexican was lacking in everything; on top of that, she displayed complete ineffectuality in her work with the singers. The narrative moved forward as if getting blood from a stone, with textures coming apart at the seams; the soloists lacked sufficient breath to ensure freedom of phrasing. I suspect that the Staatskapelle Berlin would have played more securely and cleanly, had they been left to their own devices.

I am curious whether the new production of Die Zauberflöte will stay in the Lindenoper’s repertoire. It is astounding that the one who fell victim to the critics’ mass attack was the stage director, who is able to make theatre from nothing. Or from everything at once. Who hears, sees and feels. Unlike most of the luminaries of the contemporary opera scene.