I think I’ve waited too long with my report on this year’s MusikFest Berlin. I spent whole September, travelling between Warsaw, Berlin, Bayreuth and Vienna – and when I finally collected my thoughts, Europe found itself facing another lockdown. In Poland the situation is looking particularly dramatic: opera houses and concert halls are desperately trying to hold the events programmed for the season, but everything is hanging by a thread owing to a lack of big guns, i.e. tests, which enable artistic institutions to function relatively smoothly.  We have lost control over the pandemic. Weapons will soon be lacking and we won’t be able to cope.

That Polish musical life would be restarted with such huge support of the authorities, with such extensive security measures and – perhaps most importantly – with such a sense of joint civic responsibility as in Berlin was not something I dreamed about even for a moment. However, when I shared my impressions of that first trip, I expected at least some words of admiration for the foresight of the German organisers. Nothing of the sort happened – the predominant comments were along the lines of how terrible all this was, it’s impossible to work in such conditions and music would never recover from this disaster.

Yet at the Berliner Philharmonie the atmosphere was solemn, to say the least – despite the fact that the number of people allowed in the Grosser Saal, where all MusikFest concerts had been transferred, was the same as the number currently allowed at events in the red zone in Poland. And that was not all: the entire building was divided into six separate, precisely marked sectors to keep the distance and limit contact between people to a minimum. The ushers led every listener to their place separately, making sure they would fill in the location card. Concerts lasted about an hour, without any interval. The bookshop was closed and so were the buffets. No one had to be told how to wear the face mask correctly and I saw no “welders” with visors. Thanks to the distance kept between the listeners, we could remove our face coverings, but had to put them back on again for the applause – just in case the applause was enthusiastic, as the organisers rightly predicted.

Similar restrictions were imposed on the performers. Symphony orchestras played in reduced line-ups, artists kept a distance of at least two metres, which sometimes meant that musicians had to be placed in parts of the auditorium closed to the public. No flowers, no overinflated speeches, no handshakes, not to mention hugs or selfies with fans, a ritual so popular in Poland. 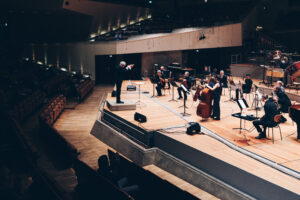 Despite the fact that virtually the entire festival programme had to be turned inside out, the few surviving longer concerts divided into two shorter ones with an interval of several hours and the final evening performed twice – sparks of mutual understanding literally flew between the auditorium and the stage. The distance necessitated by the situation did not affect the quality of the performances: indeed, I can honestly assure my readers that in some cases it strengthened the overall effect. I would even go as far as to say that the pandemic MusikFest was in many respects superior to previous years’ editions.

From the festival’s surprisingly rich offering I managed to choose five items spread over seven concerts in total. I had high hopes for the extended presentation of works by Rebecca Saunders, a master of musical chiaroscuro, who puts together a shimmering mosaic out of sounds interwoven with silence. I found her extraordinarily “tangible”, undulating compositional structures much more convincing when performed by Ensemble Musikfabrik conducted by Peter Rundel, especially in the chimerical Either or for two trumpets (Marco Blaauw and Nathan Plante, premiere) and in the mysterious, tense Skin for soprano (excellent Juliet Fraser) and 13 instruments (2015/16), inspired by Beethoven’s Piano Trio in D major “Ghost”, op. 70 no. 1 and Samuel Beckett’s 1975 television play. I was less impressed by a concert featuring Klangforum Wien, despite the involvement of the phenomenal accordionist Krassimir Sterev, who brilliantly combined recitation with playing the instrument in Flesh, a piece from 2018. Perhaps the works featured in the programme “scattered” too much in the spacious interior of the Grosser Saal: Saunders’ colourful sound clouds usually sound better in a more intimate venue. It is also possible that the first part of the ensemble’s performance under Emilio Pomàrico’s baton paled in comparison with the premiere of Der Lauf des Lebens by Georges Aperghis. The French master once again wove snatches of the text (from both parts of Goethe’s Faust, delivered by six members of Neue Vokalsolisten Stuttgart) in the quivering instrumental fabric, in which we can hear not just jazz riffs and echoes of Franco-Flemish polyphony, but also reverberations of Bach’s passions and cantatas – for example, in the form of an amazing microtonal fugue, which emerges from silence like the apparition at the ball in Faust and demonstrates that “bent is straight, and straight not so”. When it comes to musical dialogue with the legacy of Western culture, Aperghis still has few equals. 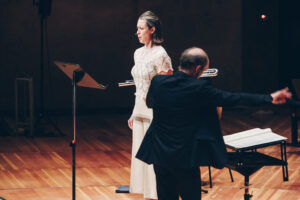 Last year I waxed lyrical about the imagination and conducting artistry of Vladimir Jurowski, author of a captivating interpretation of Strauss’ Die Frau ohne Schatten, but bridled at the shortcomings of Anne Schwanewilms’ Empress. This time Schwanewilms did not have to cut through a massive orchestra; she was also helped by being placed on the side above the stage. She was excellent in Three Fragments from Wozzeck for soprano, orchestra and children’s choir – put together by Berg even before the premiere of the opera – especially in the moving prayer scene from the beginning of Act III, in which her voice was at last resonant and nicely rounded at the top. Applause is also due to the thirteen young singers from the Staatsoper placed above the orchestra several metres apart. Yet my deepest admiration is for Jurowski: for his excellent collaboration with the reduced RSB orchestra and very intelligent programme, which also featured Ricercar a 6 from Musikalisches Opfer in Webern’s transcription, Webern’s Variations op. 30 played with dazzling precision and, at the end, Schnittke’s Concerto grosso no. 1, a work bringing to mind a veritable whirl of associations with everything we have heard earlier, beginning with Bach’s elaborate counterpoints, through Webern’s serial patterns, to the strange similarity of mood with fragments of Wozzeck. Among the three soloists in Schnittke’s piece – Nadine Contini and Erez Ofer, and Helen Collyer on the prepared piano and harpsichord – I was impressed the most by Collyer with her unassuming simplicity of playing in the Prelude and Postlude. It takes considerable sensitivity for this compositional device not to become irritatingly banal.

I experienced different kinds of thrills during the RIAS Kammerchor’s concert conducted by Justin Doyle. The fate of the evening – owing to severe restrictions imposed on choirs – hung in the balance until the very last moment. The singers prepared a short programme ranging from pieces by Hildegard of Bingen to Caldara’s sixteen-voice Crucifixus, interspersed with Martin Baker’s organ improvisations. Given a thunderous ovation, after an encore they literally ran away from the stage in order to stay within the one-hour performance limit. It is better to play it safe – preliminary research results don’t make it possible yet to unequivocally assess the risk of pathogen transfer during choral singing. 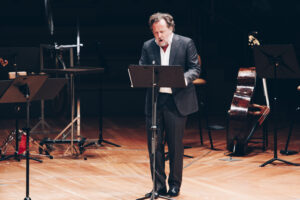 The finale, featuring Berlin Philharmonic soloists, consisted of three compositions by Wolfgang Rihm, whose mature oeuvre is increasingly referred to as “new subjectivism”. The term can also be applied to a work performed that day for the first time: Stabat Mater for viola and baritone, composed in 2019 for Tabea Zimmermann and Christian Gerhaher. The intimacy of the composition has its roots in the Renaissance tradition, while its harrowing emotionality brings to mind Schubert’s Lieder. Rihm divides a mother’s grief and anger between two performers, placing the burden of the more violent emotions on the viola player – a very good choice given Zimmerman’s temperament. It would be interesting to hear the piece interpreted by other musicians one day: will there be a man who would convey the fragility of the baritone part with courage and humbleness equal to Gerhaher’s in Berlin? The evening’s programme was completed by Sphäre nach Studie for 6 instruments – a seductive composition in terms of colour, although not free from some longueurs – and the energetic, virtuosic Male über Male in the 2008 version, with the dependable Jörg Widmann playing the clarinet solo.

I returned home from the last MusikFest concert deeply convinced that only common sense could save us – that we would be able to survive the crisis thanks to the empathy and solidarity of the musical community. Today I read worrying news from all over Europe. And I still have this feeling that the Germans will make it. “What our Christmas will be like, will be decided in these coming days and weeks,” said Chancellor Angela Merkel. She didn’t have to add that this also concerned the future of music in this country. The Germans need only to be asked to behave responsibly.