Last season I cried bitterly over the cancellation of Die Walküre at the Longborough Festival Opera. I expected – naïvely – that in our (not just operatic) life we would follow the famous “hammer and dance” strategy proposed by Tomas Pueyo as early as last March. According to this strategy, in the first stage we would try to suppress the epidemic as much as possible and then gradually “unfreeze” some areas of activity, introducing short lockdowns if necessary. This was to be done consistently and without any compromises: with the hope of returning to the pre-crisis era as quickly as possible. Time has shown that the model, seemingly so rational and obvious, requires cooperation on the local and international level. We now know that the cooperation has been a failure and that the various countries – for a variety of reasons among which public health was pushed aside with priority being given to the interests of some groups within society – have implemented their own “strategies” often standing in stark contrast with the latest information about the SARS-CoV-2 virus.

I did not expect that Anthony Negus would nevertheless take the risk and set off for Australia to conduct Das Rheingold, the first part of Wagner’s Ring, for Melbourne Opera. He plucked up his courage at a point when Australia’s state of Victoria had announced victory over the virus, bringing down the level of infections to almost zero and making it possible for local institutions to take on cultural challenges unimaginable to the Europeans as yet. This is worthy of note all the more so given the fact that Melbourne Opera is an organisation which can rely on the support of only its friends and sponsors – despite its impressive history, beginning in 2002, when the company was set up thanks to the efforts of individuals like Zelman Cowen, expert on constitutional law of the Commonwealth and former Governor-General of Australia; Richard Divall, a pupil of Harnoucourt, Mackerras and Goodall, music director of the hugely successful 1987 Sydney Alcina with Joan Sutherland as well as earlier performances of Lohengrin and Les Troyens at the Victoria State Opera featuring the phenomenal Alberto Remedios; Sir Rupert Hammer, member of the Australian Liberal Party; and Joan Sutherland herself. In 2018 Rossini’s Otello was directed for Melbourne Opera by Bruce Beresford, the director of Driving Miss Daisy, a film that was popular in Poland as well. 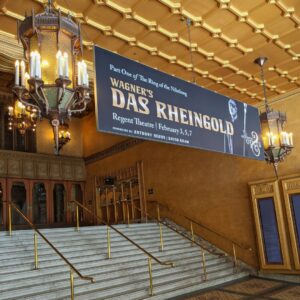 At the entrance to the Regent Theatre. Photo: Melbourne Opera

If we add to that the Richard Divall Emerging Artists Programme, established less than three years ago to support the professional careers of the most talented local singers, Melbourne Opera can aspire to be called one of Australia’s most thriving operatic institutions. Most of the company’s activities focus on the Melbourne Athenaeum, a building erected in 1839 and altered many times since. The recent premiere of Das Rheingold was presented across the street, at the Regent Theatre, where in 1929 the most impressive picture palace in the state’s capital was opened, boasting over three thousand seats, a Wurlitzer organ, a Neo-Gothic lobby, a Louis XVI-style auditorium and a Neo-Baroque “Spanish” ballroom. In April 2019 a major renovation of the building began and was completed in January 2020.

Soon after the re-opening with the famous production of War Horse from London’s Royal National Theatre – the first stage production in the ninety-year history of the Regent Theatre – the building had to close its doors because of the attack of the COVID-19 virus. When the pandemic was suppressed, the theatre reopened again with a production of Das Rheingold, a prologue to Wagner’s Der Ring des Nibelungen, initially planned for mid-2020 and eventually premiered on 3 February 2021. Everything went according to plan, although almost till the very last moment Negus had to take into account the possibility of not being able to leave the United Kingdom and having to pass the baton to David Kram, who had conducted a production of Tannhäuser in Melbourne. And so, almost imperceptibly to European opera fans, a breakthrough in “pandemic” Wagner performances took place. A privately funded company presented the world’s first pandemic staging of Wagner’s opera and at the same time a foretaste of the entire Ring, which should be presented in Melbourne in 2023. 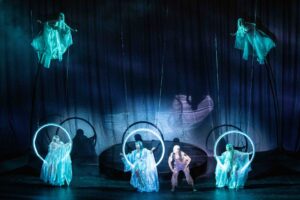 How Das Rheingold sounds under Negus’ inspired direction was something I could experience already in 2019 in Longborough. I did not expect that Melbourne Opera would decide, on the spur of the moment, to stream the last performance. When it did, I jumped at the opportunity fully aware that Negus was working in Australia in conditions less favourable than at the LFO: without an orchestra pit, with some musicians placed in the stalls of the Regent Theatre, with a cast made up largely of young singers not necessarily experienced as Wagnerians, with a staging put together on a shoestring and in accordance with the aesthetics of the earlier productions by Suzanne Chaundy, who has collaborated with Melbourne Opera on a majority of its project in recent years.

The result exceeded my wildest expectations. Negus’ interpretation has settled and despite some shortcomings in the orchestra it has become even more distinctive. For Negus the key to Wagner’s narrative is pulse –incessant, permeating each phrase, turning all, including the smallest, elements of the macroform into a whole. The “music of the beginning” praised by Thomas Mann begins to sway already in the first bars of the prelude, polished intricately in every instrument part separately only to gradually pile up in a relentless mass of successive passages and then subside like a dead wave, giving way to Woglinde’s first phrase “Weia! Waga! Woge, du Welle”. Negus chisels the various leitmotifs confidently: he doesn’t shy away from seemingly excessive roughness of the structure heralding the coming of the giants or from the intense lyricism of the musical symbol of the curse of love, or the ecstatic energy of the rainbow motif. Everything in this score breathes, laughs, cries, calls for help and mercy, and tells the story so swiftly that in the final procession of the gods we can already hear echoes of the following parts of the Ring. The unassuming master of Longborough possesses a skill which eludes a majority of today’s Wagner conductors: he gives formal cohesion to what otherwise would be only a formless stream of musical events. 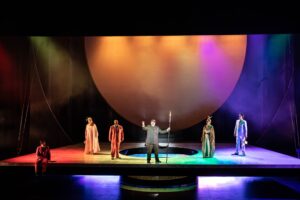 No wonder that in such a narrative the soloists moved with an assurance of stage actors, portraying their characters with full commitment and conviction. It is hard to assess the skills of the various singers on the basis of the imperfect streaming quality. Yet I wouldn’t hesitate to say that there were virtually no weak links in the cast of the Australian Rheingold, with several artists managing to create outstanding interpretations. This applies particularly to Simon Meadows’ Alberich, Shakespearean in his tragedy; James Egglestone’s Loge, seductive in his cunning and dangerous charm; and Lee Abrahmsen’s movingly vulnerable Freia. Suzanne Chaundy provided the whole with a rather conventional though at times striking stage setting – in terms of theatrical imagination, however, it was inferior to the modernist simplicity I got used to during my annual visits to Longborough.

I watched the streaming… and I grieved even more, as Norwid writes in his poem „My song”. In order for Wagner to return to European stages in full glory, we need governments as wise and indomitable as that of Australia, which is fighting the pandemic by means of the model “hammer and dance” strategy. A few days after the last performance in Melbourne and slightly more than a week before a performance in Bendigo, the state of Victoria announced another strict and short lockdown – after  only thirteen (!) new cases had been diagnosed. Hopefully by Wednesday the restrictions will be lifted and everything will get back to normal. I’m quite seriously considering a trip to Melbourne to see the entire Ring des Nibelungen in 2023. I’m afraid that Negus’ Australian venture has more chances of success than the Longborough Ring planned for the following year. Would that I were wrong this time!