“Mentsch tracht, got lacht” – man thinks, God laughs – is an old Yiddish proverb cited not only by rabbis, Tevye the Dairyman and  Woody Allen. I had a bit of a laugh as well, when in 2019, after the premiere of Das Rheingold, we made bold musical and social plans for the following seasons at Longborough. However, I did not expect that a higher power would play such a cruel joke on us. One year later the world stopped dead in its tracks. In 2021 the premiere of Die Walküre hung in the balance until the very last moment. Much to the delight of the organisers and fans of Anthony Negus’ conducting the delayed venture did take place in the end, though in a form that was completely different from the one originally envisaged: with fewer than thirty instrumentalists, the quintet reduced to a quarter of its size and wearing masks on stage, while the remaining musicians were deep in the orchestra pit, with no Wagner tubas, with one harp instead of the usual six and only a four-strong woodwind group. The director Amy Lane had to reduce her concept to devising acting tasks for the soloists, who were forced to observe social distancing rules, weave their way between the quintet’s stands and move on several platforms put in place in lieu of sets.

All this in front of a tiny audience, which for obvious reasons did not include almost any guest from outside the UK, like myself. Fortunately, the fourth among the seven June performances of Die Walküre was recorded in its entirety and, for the first time in the LFO’s history, uploaded to YouTube. Anyone interested in the production can see it: the recording, published on 26 August, will remain in open access for six months (https://www.youtube.com/watch?v=fNmPxC0NUm8)

It took me a long time to decide to travel virtually to Longborough. This was not only because of the grief over the temporary loss of my Wagnerian paradise. Longborough is not a place for lovers of powerful orchestral sounds or of singing the quality of which is measured in decibels. Music lovers for whom Wagner’s genius lies solely in the music and not in the dramatic potential of the stories he tells will find no happiness here. The surprising strength of the Longborough performances also lies in the intimacy of the theatrical experience, in the close contact between the audience and the stage. I was seriously worried that in the case of Die Walküre – perhaps Wagner’s most “human” opera – I might be missing this particular element. 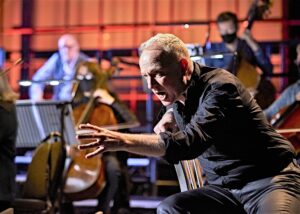 Die Walküre is intensely tragic. It is in this part of the Ring that Wotan loses his sense of divine agency, hurts his beloved daughter, sacrifices the life of his own son – and begins to realise that the mutilation of the sacred ash tree has triggered an avalanche that no one, not even he, can stop. It is in Die Walküre that we see a harrowing image of a loveless marriage: the relationship between Sieglinde and Hunding, two unloving and unloved individuals. It is in the interval between Acts One and Two that the briefest and the most poignant romance in history unfolds in the spectators’ tender imagination, a romance for which the long-lost siblings will pay the highest price. In the second act Siegmund is killed by Hunding, while Sieglinde disappears half way through Act Three, carrying in her womb the fruit of the only moment of closeness in the siblings’ lives. We learn about her death in childbirth only in Siegfried.

What is needed in order to present a convincing interpretation of Die Walküre is an artist who trusts the story and has boundless compassion for all its protagonists. I was in no doubt that Wagner’s masterpiece would find an ideal interpreter in Anthony Negus. Nevertheless, I was afraid that the conductor would not be able to achieve his intended effect with such drastically reduced forces. My fears proved unfounded. Negus took on a version of the score orchestrated by Francis Griffin, for years a specialist in such “reductions”, for which there has always been a huge demand in the United Kingdom, a land of countryside opera houses and ambitious chamber projects. Half a year before the outbreak of the pandemic I had heard a version of Act One of Die Walküre arranged for a similar line-up and played by the Scottish ensemble the Mahler Players. In comparison with Matthew King and Peter Longworth’s approach Griffin’s version is more lucid, more focused on the details of the complex texture, more effective in reconstructing the diluted chords by means that are often surprising. Negus treats the piece extremely introspectively, drawing on, among others, the tradition of performances conducted by Reginald Goodall, who always made sure that motifs and the harmonic links between them would be highlighted, resisting the temptation to shape the narrative by stressing spectacular melodic sequences. This approach is evident already in the famous storm scene from the prologue: the musical tempest sweeps through Negus’ interpretation in a settled tempo, without violent dynamic contrasts, and with dread being enhanced by an unyielding tremolo in the violins and violas, and a wandering melodic line in the cellos and the double basses. The entire performance is marked by an awareness of the truth – neglected by most conductors – of the Ring scores, in which the orchestra not so much accompanies the singers, but merges with them into a uniform tool of expression. This can be heard in Siegliende’s serious tale, sublime like some story by Ibsen (“Der Männer Sippe sass hier im Saal”), in Siegmund’s heartbreakingly lyrical monologue, in the middle section of Wotan’s farewell “Der Augen leuchtendes Paar”, where for the first time in my living memory none of the musicians went beyond mezzo forte, with the dynamics going down to an ethereal pianissimo in some fragments. 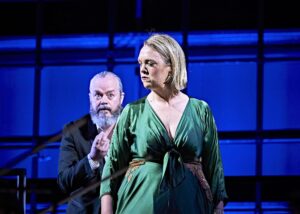 To match such a well-thought-out concept, Negus selected singers on whom he could rely completely. I must admit that of the entire cast I was impressed the most probably by the Sieglinde of the Canadian Sarah Marie Kramer, a singer endowed with a youthful, almost girlish dramatic soprano with a golden tone and impeccable intonation. Much greater expressive potential and truly phenomenal acting were shown by Lee Bisset (Brünnhilde), whose warm and rich voice, however, already betrays signs of fatigue, manifested in an excessively wide vibrato, among others. I had praised Madeleine Shaw’s Fricka in the LFO’s Das Rheingold – this time her rounded soprano sounded even more resonant and scathing, not a bad thing in the scene of marital quarrel with Wotan. The tragic figure of the father of the gods was portrayed by Paul Carey-Jones, a baritone rather than bass-baritone, an extremely musical singer with a small, but exceptionally soft and nobly coloured voice.  It is a pity that he ran out of steam in the finale of Act Three, where several excellent interpretation ideas could have done with better breath support. The incomparable Brindley Sherratt was in a class of his own, with his pitch-black, ominous-sounding bass perfect for the role of Hunding. Over the last few seasons Siegmund has become a calling card of Peter Wedd, whose brass sounding and increasingly dark tenor dazzles with its agility, lyricism and incredible ease of phrasing. If Wedd did not sound entirely convincing at times, it was only in those fragments in which Negus forced him to abandon routine and approach the character of the tragic Wölsung differently.

I keep coming back to this recording and I cannot stop marvelling that such a daring venture could be undertaken in such unfavourable conditions and with such success at that. And yet I feel sorry. For the singers, who were bursting with energy after the pandemic year and you could hear that they were simply suffocating in the even more confined space of the LFO stage. For the director, who was unable to control their chaotic and sometimes exaggerated acting. For the musicians, who played for four hours with maximum concentration and a sense of individual responsibility for every missed note. Above all, for the conductor, who probably dreamt about a different Walküre. 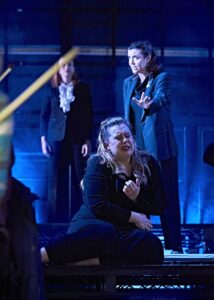 Let’s not think too much or some deity will laugh at us again. But we can dream, can’t we. And in spite of everything we can, even if only surreptitiously, glance at Negus’ and his singers’ plans. Let’s hope the plans will materialise. And let’s hope I will not have to judge the effects of the artists’ work remotely again.