I didn’t expect that after nearly two years of pandemic scarcity I would be travelling to the United Kingdom as often as I have done recently. In the past six months alone, despite concerns over the war and the growing post-Brexit chaos, I have visited two of London’s most important concert halls and three English opera houses, one of them twice. The occasion for my November trip was another festival of Polish sacred music, Joy & Devotion (which I wanted to hear in its entirety after the excellent impressions of last year’s inaugural concert), and the world premiere of Agata Zubel’s Piano Concerto No. 2 – two events co-organised by the Adam Mickiewicz Institute and included in London’s still extremely rich musical offerings within just one week.

London greeted me in its usual way: with torrential rain, deafening noise and plenty of surprises in the hotel, which the following day – after I changed rooms – I linked to the presence of Sir John Barbirolli’s ghost roaming around. Had I realised earlier that the conductor had been born in that very house, in a flat above a bakery that closed down years ago, the ghost might have left me in peace already on the first night. He was more gracious later, although he continued his pranks until the end, breaking my radiator and from time to time, without any warning, turning on the shower in my tiny bathroom. Such things sometimes happen in England, and this is one of the reasons I love this country, where a newcomer is reminded at every turn that he or she is treading on the footsteps of the past. For example, on the way to St Martin-in-the-Fields, through a labyrinth of West End theatres, where the senior Mr Barbirolli, one-time violinist at La Scala, played, as did his son John, before he put aside his cello and took up the baton.

It is hard to find a place in this part of the capital without a thriving cultural life. All the more reason for me to admire the persistence and consistency of Paweł Łukaszewski, who not only managed to organise his festival for the second time – in one of Europe’s most famous churches – but is already making bold plans for next season. Once again he managed to persuade three English ensembles to work with him, each ensemble with a very different character and different mission, but all well known to the local audiences, and to the musicians who collaborate with them and often even were brought up within their ranks. I have already written extensively in Tygodnik Powszechny about The Gesualdo Six, an ensemble led by Owain Park, which opened last year’s festival. The leaders of the other two choirs fully deserve to be called icons of British musical life. Stephen Layton is one of the few choirmasters who are just as successful as conductors of orchestral ensembles (until 2016 he led the City of London Sinfonia, which he took over two years after the death of Richard Hickox). In 1986 he founded the chamber choir Polyphony with one concert in mind. The choir has been active ever since, recording more than a dozen albums, some of them for the Hyperion label, and establishing itself as one of the world’s leading ensembles specialising in Bach and Handel. Two years its “senior”, the Rodolfus Choir came into being thanks to the initiative of Ralph Allwood, former Director of Music at Eton College and a keen populariser of choral music among people of all ages and levels of musical ability. The choir is made up of young and very young singers, most of them participants in the famous Choral Courses, organised by Allwood for more than forty years – courses that for many became the springboard for future careers, not just in choral music.

The festival’s size and structure of its programme have remained unchanged: three concerts of Polish choral and organ music (the only departure from this pattern being the participation of the cello in a work by Roxanna Panufnik, but more on that in a moment), primarily works by contemporary composers, including those of the younger generation, works sometimes presented alongside the legacy of earlier periods. This time, however, there were no revelations on a par with Krzysztof Borek’s Missa Mater Matris, and the debutants were somewhat disappointing – among them Marek Raczyński, whose Missa brevis was heralded as the festival’s greatest sensation. Yet the members of The Gesualdo Six interspersed its individual segments with music by other composers, perhaps in the hope of concealing the formal shortcomings of the work, which lost its momentum already after a very interesting and original Kyrie, inspired – perhaps subconsciously – by the tradition of the Eastern Churches. In comparison with last year the performance of the phenomenal sextet (joined in several pieces by Fiona Fraser, Rachel Ambrose Evans and Will Prior) was not entirely satisfying. Despite their customary perfect intonation, wonderfully blended voices and overall culture of sound, their performance lacked the enthusiasm that so inspired the singers at the inauguration of the previous festival. The “Joy & Devotion” could only be felt in Górecki’s Veni, o mater terrae and O mater semper alma, which began the concert, and which are, after all, nothing more than extracts from the unfinished cycle Z pieśni kościelnych (Church Songs) based on the church songbook compiled by Father Jan Siedlecki – with a Latin text by Edward Tambling, published only after the composer’s death. Górecki’s harmonisations are simple and, at the same time sincere and decidedly “his own” – which cannot be said of Teofil Klonowski’s nineteenth-century setting of Gaude Mater Polonia, sung gloomily at the end of the evening. For us it is one of the most important historic pieces of Poland’s musical culture; for the English, well-versed in the history of plain-chant – another version of the popular Eucharistic hymn O salutaris hostia in an anachronic and rather graceless setting for four voices. I think that Owain Park’s ensemble needs to be intrigued by something again, be given pieces of the highest quality, be made proud that they are revealing to the local audience early music other than the relatively well-known works by Pękiel and Gorczycki. 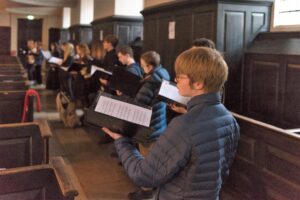 Members of Rodolfus Choir during a rehearsal. Photo: Marcin Urban/IAM

Much more delight was provided by the excellent Polyphony choir, which opened the festival with a programme consisting exclusively of new music. This was the first time I heard the ensemble live and I fully agree that Layton has raised it to the highest world-class level. The singers’ clear voice production, beautiful, luminous timbre (especially in the even-voiced sopranos), and above all, their perfect sense of musical timing and drama, enabled them to emphasise all the more the strengths of works written in the aesthetics already familiar to the British (e.g. Paweł Łukaszewski’s Missa Sancti Papae), draw attention to the intriguing aspects of the style of the young composers (Ziółkowski’s subtle Ave Maris Stella, intriguing in terms of its colour) and cover the shortcomings of the weaker items on the programme (I will not mention the names, but just note that Polish choral music sometimes verges dangerously on kitsch). It was a display of sheer professionalism, just as the concert of the Rodolfus Choir three days later was an exemplary demonstration of the effects of working with a virtually amateur ensemble largely made up of teenage singers. Ralph Allwood chose their repertoire cleverly, selecting primarily texturally simpler gems of early music. Neither minor rhythmic stumbles nor occasional intonation slip-ups were offensive in their performance; instead, the audience was gripped by the joy of music-making and full commitment to the works presented. The experienced choirmasters instils in his choristers the most essential elements of their craft, as we saw during the performance of Roxanna Panufnik’s composition, which was interrupted by sudden applause. All Shall Be Well, a dialogue rich in complex harmonies and sudden dynamic shifts between the choir and the cello (Leo Popplewell), in which Panufnik juxtaposes the text and melody of Bogurodzica with the words of the English mystic Juliana of Norwich, requires maximum concentration, especially from such young performers. The choristers resumed the interrupted climax confidently and with a smile on their lips. This small incident encapsulated the essence of the festival slogan, also captured in the playing of the excellent organist Rupert Jeffcoat, who amazes not only with his technical virtuosity, but also with his sophisticated ornamentation and imaginative, often unusual registration of the instrument. The walk across the Thames, to the Royal Festival Hall, proved not only to be a trip into entirely different aesthetics, but also an unexpected journey deep into musical time. Agata Zubel’s Piano Concerto No. 2 – a concerto with a single soloists but with two pianos, including one microtonally tuned – was written for Tomoko Mukaiyama, a Japanese-Dutch pianist, visual artist and performer. Both the author of the programme note and later commentators stressed the performative aspect of the piece – of little significance in my opinion in comparison with the intricate form, the polyphony of sparkling colours typical of Zubel and the subtle references to Lutosławski – in terms of working with rhythm and sophisticated transitions from chaos to order and back again. Particularly striking in the Concerto is the middle movement: a delicate, instrumental “song” in which faithful observers of the composer’s work will easily find grains of an almost human voice thrown into the spectral orchestral fabric. Zubel has been extraordinary lucky when it comes to performers. It would be hard to imagine more sensitive interpreters of this work than the London Philharmonic Orchestra with Edward Gardner, one of the world’s most distinguished specialists on Lutosławski’s legacy, who in the following items on the programme showed the inspirations of the Concerto in ever deeper retrospect. First, he unveiled the astonishingly classical beauty of Lutosławski’s Symphony No. 4, which Andrzej Chłopecki once called the swan song of modernism, then he delighted the audience with a lyrical take on The Rite of Spring – two pieces without which Zubel’s Piano Concerto No. 2 would never have been written or would have sounded quite different.

So there are reasons for us to be proud, but we must not drown this pride in national complexes. I’m looking forward to future Joy & Devotion festivals. I wish Agata Zubel a speedy return to London concert halls. I expect that Polish music will be heard more and more in the British Isles. In the meantime let us explore, answer questions, reveal contexts and prepare programme booklets for future seasons. British music lovers are genuinely interested in music, and not only their own.