Two outsiders. Two victims of persecution whose lots in life became entwined for the long term. A Gentile and a Jew who shared inspirations in a much greater degree than one would suppose on the basis of their complicated lots in life. This month marks a 20th anniversary of the death of an outstanding Polish-Jewish composer Mieczysław Weinberg, who was a fast friend of Dmitri Shostakovich. The newest album released by Stowarzyszenie Muzyki Polskiej (Association of Polish Music) features soprano Elżbieta Szmytka and pianist Grzegorz Biegas performing Weinberg’s Jewish Songs op. 13 and 17, as well as Shostakovich’s Piano Sonata in B minor. Here is my text originally published in the programme book accompanying the aforementioned CD. 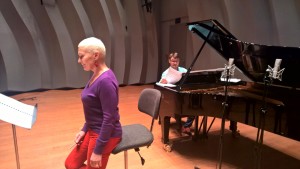 When the Axis army struck the Soviet Union on 22 June 1941, Dmitri Shostakovich had been working at Leningrad Conservatory for four years already, trying to regain his position after a period of great terror and dramatic conflicts with Stalinist censorship which had ended in, among other things, the withdrawal of his Symphony no. 4. In a surge of patriotic feelings, he had volunteered to take part in the Great Patriotic War, but was not accepted on account of a vision defect. Building of fortifications around Leningrad was begun, evacuations of the privileged were launched. Shostakovich remained in the city. He joined the fire brigade and took shifts standing watch on the roof of the Conservatory. In September, the Germans crossed the Moscow-Leningrad train line. Over 2.5 million civilians were stuck in the Siege of Leningrad. A month later, the composer decided to evacuate. He managed to get to Moscow, from whence he was transferred by train to Kuibyshev, where he finished work on the Leningrad Symphony. In the spring of 1943, he returned to Moscow.
In September 1939, the 20-year-old Mieczysław Weinberg escaped Warsaw to the East, as did many other Polish Jews. His father, mother and sister died in 1943 at the Trawniki concentration camp during Operation Harvest Festival, carried out at Himmler’s command. That same year, Weinberg ended his nomadic life. After two years in Minsk, Belarus, as well as evacuation to Tashkent, he settled for the rest of his life in Moscow – at the urging and thanks to the support of Shostakovich, who had been enchanted with the young composer’s Symphony no. 1. They took up residence in the same neighborhood. They became friends. They were bound by a commonality of spirit, morality and aesthetic principles.
Shostakovich wrote his Sonata in B minor just before moving from Kuibyshev to Moscow, in the first few months of 1943. After a lengthy pause in composition for piano, he was clearly struggling with the material: he created a heterogeneous work, in the first movement dramatic, revealing his mastery in use of counterpoint; in the second, restrained and clearly tending towards Neoclassicism; in the third, full of emotion, bringing to mind associations with the finale of Chopin’s Sonata in B-flat minor. It is a music of conflict, considerably closer in language to the Leningrad Symphony (or the ‘wartime’ sonatas of Prokofiev) than to the Sonata op. 12, written 17 years earlier. That one had been written in a spirit of Russian Modernism; this one fits rather into a continuation of German Romanticism’s legacy. His contemporaries were disappointed by it. Today, it is striking as a testimony of those days when ‘it was difficult to live’ for Shostakovich; but at the same time, it is intriguing as a herald of the mature works of the middle period of his œuvre.
Weinberg’s two song cycles, the so-called Children’s Songs op. 13 and the Jewish Songs op. 17, are linked by a very peculiar bridge. The first were written while he was still in Tashkent, in 1943, to texts by Isaac Leib Peretz, a classic of Jewish literature who came from a Sephardic family that had settled in Zamość. The background for the second cycle is a set of poems by Shmuel Halkin, one of the leading figures in Yiddish literature in the Soviet Union, an author basically unknown in Poland. For the most part, the Children’s Songs convey an impression of simplicity and cheerfulness of mood. The subject of the songs from op. 17 is the drama of the Patriotic War. More careful analysis, however, reveals an intense connection between them: both cycles are basically a protest against war – the one perceived naïvely through a child’s eyes, and the one experienced deeply by an adult. The culminating points of the two opuses are the penultimate songs: ‘Der yesoymes brivele’, the letter of an orphan to his dead mother; and ‘Tife griber, royte leym’ – the story of the mass executions of Jews in Babi Yar, in which at least 30 000 people died.
Much has been written lately about Shostakovich’s influence on Weinberg. Less about inspirations flowing in the other direction. But it is difficult to imagine that the cycle Jewish Folk From Poetry, and especially the last symphonies of Shostakovich, were written without knowledge of the experiences of the refugee from Warsaw. For both of them, those ‘tife griber, royte leym’ – deep graves and red clay – became a metaphor for despised outcasts whose œuvre threatened the unity of an oppressive world order.
Translated by Karol Thornton-Remiszewski