Aschenbach is dead. And has been for quite some time. This is attested by an enormous photo in a black, encrusted frame – a blurred photo covered in fungi like a porcelain portrait on a forgotten gravestone. In front of the photo stand flowers in vases and a tripod holding up a snow-white wreath. Alongside, a black matte-painted grand piano and rows of chairs occupied by neatly-dressed mourners. On the right, a pile of monstrously huge tulips with indigo petals. In a moment, the writer seized by a creative block will meet the Traveler, who will encourage him to travel south. Are we at the gates of a cemetery chapel in Munich, or in some weird funeral home where the ritual has been going on for so long that the photograph of the deceased has managed to grow fungi?

The narrative of Britten’s Death in Venice fills two acts, divided into scenes moving from one to another abruptly, a bit as if in a dynamic film montage – at first glance without any relationship to each other, similar to hallucinations or phantoms in a dream. The composer and the librettist Myfanwy Piper were trying in this way to escape the trap of literality that Mann avoided thanks to the use of literary irony and ambiguous play between the author and the reader trying to follow the meanings. Britten’s opera can thus be interpreted as a record of the writer’s agony in which ‘figures of death’ (the Traveler, the Elderly Fop, the Old Gondolier, the Hotel Manager, the Hotel Barber and the Leader of the Players), the ominous Voice of Dionysus and the ambiguous Voice of Apollo, and even Tadzio himself, turn out to be just the effect of the increased activity of a dying brain. However, Graham Vick, the director of the most recent staging at Deutsche Oper Berlin, has gone a step further. It seems that his Aschenbach has returned from the hereafter to yet again stand eye to eye with death and recreate his nightmarish journey into abject degradation. 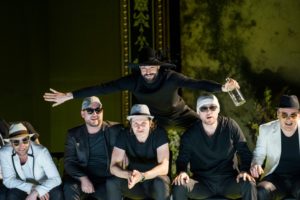 The problem is that there is no space in Vick’s concept for the vision of pure beauty that surreptitiously invades the writer’s neatly-arranged life. From the very beginning, the stage is drowning in colors of decay: purulent yellows, dead green, bluish purple and matte black (stage design by Stuart Nunn, lighting design by Wolfgang Göbbel). There is no contrast between the sunny Lido beach and the gloom of the foul-smelling Venetian canals. There is no Venice at all. All of the plein-air scenes are replaced by a pile of overgrown tulips; all of the indoor episodes play out beneath the black frame, from which even the photo of Aschenbach disappears in Act II. The protagonist, oddly distanced from his surroundings, thrashes about among a small number of unchanging props. The chairs set in rows replace the ship’s deck, the hotel restaurant and the barber shop. The funeral wreath of white flowers ends up at a certain moment around the neck of Tadzio, the winner of the boyish ‘games’ at the beach. In barely-sketched, difficult-to-identify spaces, lust and death reign absolutely. The band of sellers surrounds the writer like a crowd of horny whores and pimps, making gestures of unambiguously erotic connotations at him. Aschenbach is not disgusted by the street stench or the scent of disinfectants – only by his own sexual urges. The specter of Indian cholera hanging over the city becomes a metaphor of moral decadence. The point here is not beauty and truth, nor the conflict between Apollo and Dionysus, but rather the pitiful drama of a widower who in his old age has discovered within himself a homosexual and a pedophile.

Such a shallow, basically bourgeois and prudish interpretation of Death in Venice is astounding in the second decade of the 21st century. To make things even worse, Graham Vick has decided to kill off Tadzio, who dies in the finale at the hands of a band of his rowdy peers. Aschenbach holds him as Our Lady holds the dead Christ, and then lays his corpse aside and slips away into the wings. Has Apollo finally fallen in the conflict with Dionysus? Did Tadzio have to die in order for the writer to dare to show him tenderness? Or maybe this whole tale was just a warning from the hereafter not to give in to one’s own drives? I have no idea. In the final scene, I saw rather the weakness of a stage director who has decided to at least close off a chaotically-constructed narrative with an iconoclastic conclusion. The only thing in this staging that inspired my genuine admiration was Vick’s decision to give the roles of Tadzio, his family and friends not to dancers, but to actors ideally cast in terms of physicality (the tiny Rauand Taleb and the two-heads-taller Lena Natus as his mother), realizing their pantomime with full involvement and, at the same time, a charming and very convincing clumsiness (superb choreography by Ron Howell). 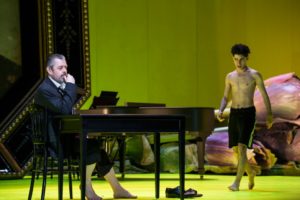 Fortunately, the musical side of the production fully recompenses the unsuccessful stage direction. The Deutsche Oper ensemble plays with a glittering, selective sound ideally balanced in proportions between sections and, at the same time, beautifully diversified in the separate orchestral planes distinguished by Britten – in the ‘Asiatic’ gamelan-style music of Tadzio, the somber harbingers of death (where the woodwinds are combined with the tuba), the caricatured combination of the plague motif with the ‘unearthly’ portrait of the boy (Aschenbach’s feverish dream scene). While conductor Donald Runnicles did not avoid dragging in a few spots in Act I, one must admit that the opera itself only picks up the tempo at the moment when the writer chokes out a bashful ‘I – love you’ at the end of Act I, Scene 7. Paul Nilon, a superb lyric tenor, known above all for roles in Baroque and Classical operas, debuted in the role of Aschenbach in 2015 at the Garsington Opera. The small dimensions of that stage, along with Paul Curran’s transparent stage direction, no doubt facilitated his task. With the difficult acoustics of the Berlin theater, he struggled for a long time, initially in a voice with excessive vibrato and sparse overtones. In Act II, he gave it his all: he created a character of immeasurable psychological complexity, supporting his interpretation with enormous power of expression and flawless diction. The real hero of the evening, however, turned out to be Seth Carico in the seven roles of the writer’s alter ego and the Voice of Dionysus: a true bass-baritone of gorgeous tone, resonant in all of its registers, including the mocking falsetto. Tai Oney (the Voice of Apollo), a full and colorful male soprano, acquitted himself worse, however, with an excessively hysterical sound. Among the secondary characters, Andrew Dickinson (the Porter) stood out; since last season, he has been permanently associated with DOB, where he has shone in, among other roles, the Novice in the recent production of Billy Budd directed by David Alden. The choir deserves separate praise – for its great vocal production, musicality in phrasing and well-blended sound. 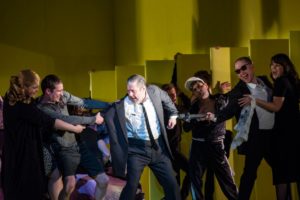 In 2009, when Runnicles took over as artistic director of the Deutsche Oper and announced that he would introduce Britten’s works to the Berlin house’s permanent repertoire, voices of opposition reverberated: ‘Britten? That won’t be accepted here.’ Fortunately, he did not listen. In just under four years in Berlin, he has put on Peter Grimes, Billy Budd, The Rape of Lucretia and Death in Venice. In December 2016, his contract was extended to 2022. We shall see how things go in the future, though after my experiences with Vick’s staging, I would prefer just to listen.