I delayed my report from Winslow for so long that a bomb exploded – only somewhere completely different. Not even a month before the opening of the new season in Bayreuth, the news broke that Roberto Alagna had withdrawn from the title role in the new staging of Lohengrin under the baton of Christian Thielemann, directed by Yuval Sharon. Apparently because of too many other obligations, he had not succeeded in learning his role in time. The grotesque nature of these explanations only confirms the fears I had from the moment the French tenor’s name appeared in the cast. But that isn’t the point here. The management of the Bayreuther Festspiele made an announcement in a tone of mild panic, informing the audience that they were ‘intensively’ searching for a replacement. How did that happen? Did the performer of such a major role in a house of that stature not have any understudy? No doubt he did, but in today’s day and age, the understudy is there not to come out on stage in such a situation, but rather to do the dirty work for the star during rehearsals for the show. At the world’s most famous houses, it is more and more often names that appear, rather than singers. It is names – not vocal artistry – that drive ticket sales and guarantee the endeavour publicity, as measured by the number of articles in the media, likes on social media portals and comments by ecstatic fans posing for pictures alongside operatic celebrities.

Opera has often gone hand-in-hand with poor taste, but it never used to happen at such cost to the artistic side. We shall shortly find out who will replace Alagna. We can already take bets, because only a few singers are under consideration. Let us hope that they end up with someone who can handle the part. Over a dozen others are waiting in line who haven’t the slightest chance of appearing on opening night, though they often are every bit the equal of the sure bets, and sometimes even better. It is for this reason that I insist on encouraging my readers to visit theatres that are more modest, yet more committed to the idea of the operatic form – with its intrinsic requirement of care for style and dedicated work in a team directed by a wise conductor. A singer’s class is not attested by the ability to scream out their role on a stage the size of an aircraft hangar. The so-called big voices reveal the fullness of their values only when they can diversify the timbre throughout the dynamic scale. Vocalists should understand what they are singing about and be able to communicate without difficulty with the conductor, the orchestra and the rest of the cast. 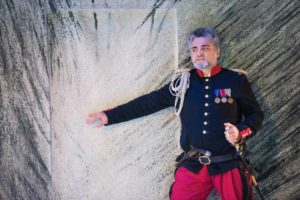 Fortunately, there are still such musicians and such production teams, though they normally have to tighten their belts and fulfill their dreams on a shoestring budget. Sometimes they end up with results vastly superior to those of the expensive productions on the big-league stages. Today, however, I shall write about something else: an endeavour that does not even think of competing with either the giants or with a handful of ambitious idealists. The Winslow Hall Opera, which I visited for the first time last year, in many respects bears the marks of grand caprice, but it does serve the common good – more precisely, it satisfies the cultural and social needs of the local community, offering it a clear theatre experienced up close, at least decent singing, though in the rendition of young or lesser-known artists, but in general: an encouragement toward further contact with opera, for example in London, less than 100 km away.

Oliver Gilmour, the brother of Winslow Hall’s owner and the Opera’s artistic director, prepares only one show per year – every time, these are works from the standard repertoire that are sure to attract local music lovers. The performances take place on a tiny stage under a tarpaulin mounted straight on the lawn of the residence, which during the intermission turns into a picturesque field for a picnic – a favourite pastime of English open-air opera attendees. This year, the choice fell upon Il Trovatore, for which – aside from aspiring singers from England – Gilmour invited soloists with whom he had had the opportunity to work previously abroad, among other places at the Bulgarian National Opera in Sofia, where he held the post of principal conductor in the 1990s. Tsvetana Bandalovska, the fine Amelia from last year’s Un ballo in maschera, turned out to be an even more convincing Leonora; also performing better was Vasile Chişiu in the role of the Count di Luna, though he took as long to warm up as previously in the role of Anckarström. All of the supporting roles were worthily cast – and here I shall point out in particular the superb acting and beautiful baritone of Piran Legg (Ferrando). Argentinian tenor Pablo Bemsch, from 2011 to 2013 a member of the Jette Parker Young Artists Programme at the Royal Opera House, built Manrico’s character in a manner befitting a house considerably more ambitious than the Winslow Hall Opera: the singer has at his disposal a well-favoured, timbrally-balanced voice, produced freely with a large wind capacity. It is a pity that the phenomenally gifted Norwegian Siv Iren Misund didn’t put a little more effort into mastering the part of Azucena – her juicy, dense mezzo-soprano with a truly contralto low register would have made an electrifying impression on me, were it not for numerous textual errors. The reduced-size orchestra accompanied the soloists conscientiously, though without any special finesse – it is worth emphasizing, however, that Gilmour imposed faster tempi on them this year and put more work into organizing the harmonic verticals, to the benefit of the intonation and pulse of the whole. 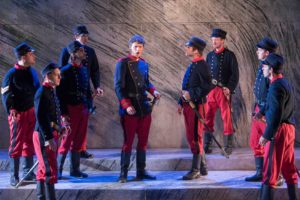 The crowd scene with Piran Legg (Ferrando) in the middle. Photo: WHO.

The staging job again went to Carmen Jakobi. After Un ballo in maschera, with its plot set during the reign of the Swedish King Gustav III, the director shifted Il Trovatore into the realities of the Risorgimento, or more precisely, the Italo-Austrian war and the fierce conflicts between Garibaldi’s divisions and the armies of Major General Kuhn von Kuhnenfeld. And so the Count di Luna became an Austrian officer; and Manrico, a soldier in the Alpine Rifle Corps, whereby the competition of the two men for Leonora’s attentions gained an additional political dimension. On the other hand, Jakobi’s directorial maneuovre made the relationship between Manrico and Azucena more probable – a Garibaldi volunteer raised by a Roma woman does, after all, speak more powerfully to the imagination than a gypsy troubadour. The symbolism of the tragic conflict among the forces of vengeance, jealousy and love was highlighted by the stylish costumes, whose author (Penny Latter) had recourse to a certain anachronism: she dressed Manrico in the red shirt of the participants in the Expedition  of the Thousand, which is considerably more strongly associated with Garibaldi than are the Alpine Riflemen’s uniforms. The acting tasks – carried out, as usual with Jakobi, clearly and precisely – took place against the background of an abstract glow ‘borrowed’ from an etching by Francisco Goya entitled Escapan entre las llamas, from the cycle The Disasters of War (stage design by Paul Webb). Changes of scenery were suggested only by the lighting (Matt Cater) and the unveiling of individual panels of the background – in such a manner that the empty spaces reflected Leonora’s balcony, the monastery cross, the barred window of Manrico’s cell. Maximum theatre with minimal expenditures. 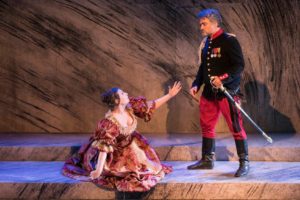 It is difficult to compare the Winslow Hall Opera even with the unpretentious summer opera at Longborough. It is a truly neighbourly community theatre, evoking in me peculiar associations with the traveling cinemas of old. I well remember from my childhood those vans, thanks to which even the tiniest hamlet could – for a few hours – boast of its own cinema. Thanks to the Gilmour brothers’ initiative, for a few days a year Winslow – a town of a few thousand inhabitants in Buckinghamshire – can boast of its own opera house.