“Not until the turn of the century did the outlines of the new world discovered in Tristan begin to take shape. Music reacted to it as a human body to an injected serum, which it at first strives to exclude as a poison, and only afterwards learns to accept as necessary and even wholesome,” wrote Paul Hindemith in 1937 in the first volume of his textbook The Craft of Musical Composition (trans. Arthur Mendel). A sea of ink has already been used to describe the novelty of Wagner’s masterpiece – suffice it to say that the prelude to Act I stunned no less a figure than Hector Berlioz. Yet whenever the word intimacy is mentioned with reference to the work, some cannot help rolling their eyes. Everything seems to suggest they are right: large forces needed to perform the piece, the longest love duet in the history of the genre or the dying protagonist’s monologue that last half of Act III.  However, the essence is not in the size but in the violent accumulation of emotions – in what is the most profound and the most intense and thus the most strongly linked to the experience of true closeness. Over the last few seasons there have been several significant attempts to turn Tristan into a chamber piece, at least in its interpretative dimension: by lightening up the orchestral textures and encouraging the singers to make their characters psychologically credible. Musicians’ efforts were not always matched by those of the directors wavering between asceticism in their staging and the temptation to heap upon it a whole range of unjustified symbols and references.

Günther Groissböck’s directorial debut announced before the pandemic piqued my curiosity even more so given the fact that by definition, as it were, it excluded an “excessive” approach to Tristan und Isolde. The venture – laudably and honestly termed Tristan Experiment – was planned in the tiny interior of Vienna’s Kammeroper operating under the auspices of the Theater an der Wien. The same theatre where Krystian Lada staged Vivaldi’s Bajazet last year, shortly before another closure of most European opera houses. Its stage is the size of a narrow platform in a cinema, the auditorium has fewer than three hundred seats and the orchestra pit can accommodate more or less one-fourth of the forces intended by Wagner.

I arrived in Vienna after the premiere, having already heard that Matthias Wegele had devised a chamber version of Tristan for just 21 musicians and that in Groissböck’s concept the eponymous protagonists were taking part in a mysterious experiment – medical? psychiatric? – which took a turn quite unexpected by its supervisors and participants. I became truly intrigued by the former: I had already encountered examples of remarkably successful reductions of Wagnerian scores and begun to pursue them as valuable in themselves. I decided to see the director’s vision with an open mind. It is one thing to have the French straitjacketing characters from Russian operas and another to have an Austrian tinkering with an opera born of Schopenhauerian pessimism and staging it in a city where Doctor Leopold von Auenbrugger treated mental disorders with orally administered camphor, Freud gorged himself on cocaine for the purpose of research and the Am Steinhof hospital became an official centre of extermination of people with disabilities during the Second World War. I expected an unconventional approach from Groissböck and I was not disappointed. 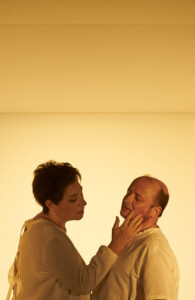 It is hard to say whether Tristan and Isolde in this version are two patients who have no recollection of their past relationship, or a couple of complete strangers in whom the staff of an experimental hospital are trying to induce passion and test its limits. It is not that important anyway: what does matter is the fact that the three researchers drive the protagonists into a state of hallucination mixed with ecstasy, revive genuine or fake memories of their love, make them identify with Wagner and Mathilde Wesendonck and then lose control over them. The biggest asset of the staging is a precise distinction between the two worlds: the hospital flooded by merciless light, and the swaying “night of love”, at times blurry like a phantom, from which emerge again and again the interiors and building of the Wesendoncks’ villa in Zurich. Inconspicuous and vulnerable in their hospital gowns, Tristan and Isolde regain their dignity and sense of purpose as Mathilde and Richard. The trio of experimenters manipulating them reveal the less obvious traits of the remaining protagonists: “Doctor” Marke’s frustration that the patient fails to fulfil his research expectations; the false friendship of the character in the double role of Kurwenal and Melot; Brangäne’s naive stupidity.

The performance is a treat for the eyes thanks to the set built practically without props, but primarily with light and image (sets and costumes – Stefanie Seitz, video – Philipp Batereau, lighting design – Franz Tscheck). The theatrical gesture still needs some polishing, especially in the case of Brangäne and Kurwenal/Melot, portrayed by singers less used to the stage and, consequently, less comfortable in the microscopic Kammeroper. But before I discuss the vocal part of the venture, I would like to dwell for a moment on Wegele’s phenomenal orchestration and the cuts he made together with Groissböck.

Wegele did not limit himself to mechanically reducing the orchestral forces. He cut the string quintet in unevenly, leaving three instruments in the first violins, violas and cellos, two in the second violins and one double bass. He left out the percussion, harp and tuba, entrusted all wind parts to single instruments, and complemented the bass in the orchestra with the accordion, practically unrecognisable to the untrained ear. Thus he built many textures from scratch, as it were, achieving very convincing sound effects (the harp replaced by the flute and string pizzicato). Consequently, he was able to bring out from the score what can be heard in it anyway, but what often is missed by the listener: a spectral harbinger of Mahler’s symphonies, Schönberg’s Verklärte Nacht and Zemlinsky’s rough harmonies. Some cuts in the score were questionable, however: while a smooth transition from the love potion scene to the great duet made it possible to quite convincingly link the two acts in the first part of the performance, the fact that the group scene towards the end of Act III was retained was surprising – the logic of such dramaturgy would suggest just as smooth transition from Tristan’s death to Isolde’s final monologue. 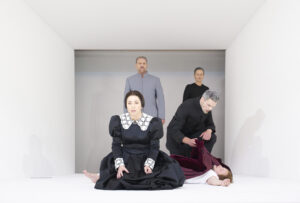 Yet these are only quibbles, which I had to mention given the surprisingly high musical quality of the whole. Despite the reduced line-up the sound of the Wiener KammerOrchester conducted by Hartmut Keil was rounded and vivid, not for a moment suggesting that we were dealing with an “economical” version of Tristan. The title roles were entrusted to two singers with a lot of experience but not usually associated with the great Wagnerian repertoire: Kristiane Kaiser, a long-time soloist with the Volksoper Wien, an artist with a soft soprano with a lovely colour, though at times insufficiently ringing in the middle register, which suggests that she might not be able to cope with the part on a bigger stage; and Norbert Ernst, an excellent singer from Vienna. I hope with all my heart that directors of opera houses will stop pigeonholing him as a “character tenor” and make more courageous casting decisions with him in mind. He may not be a Heldentenor with the makings of a Tannhäuser, but he is certainly an extremely musical singer, with a great sense of text and rhythm of the phrase, and a ringing, thick, technically-assured voice. I hope that his Tokyo debut as Walther in Die Meistersinger will take place and will be a complete success. Groissböck was in a class of his own – also acting-wise – as the wounded King Marke: at times he just had to be careful not to blast out the tiny stage at Fleischmarkt with his powerful bass. Juliette Mars (Brangäne) was excellent as a character but slightly disappointing as a singer: her sharp, not very even mezzo-soprano sounded brighter at times than Isolde’s singing. Let us hope that Kristján Jóhannesson (Kurwenal/Melot) will soon dazzle us not only with the volume of his beautiful baritone, but also with his ability to vividly portray his characters.

I left Kammeroper, feeling that no harm had been done to Wagner. May there will be more such experiments. They may turn beneficial to the health of opera – still deep in the pandemic-induced crisis and crying over the times that will never be back.