The occasional tourists who stray off the main route and reach Monieux in the Provençal department of Vaucluse are not likely to spend more than a few hours there. Having seen the vestiges of old fortifications and guard tower, having visited the Romanesque church of Saint-Pierre, and ventured into some picturesque backstreets – they will proceed on their way, possibly carrying off a pouch of lavender, a piece of sheep’s cheese, or a jar of honey from a local apiary in their rucksacks. There is plenty more to see in the area, from the Nesque River gorges to the soaring limestone peak of Mont Ventoux, towering above the entire delta of the Rhône. A writer, however, will look at Monieux with a different eye, especially once he has taken the fateful decision to settle there. Stefan Hertmans (for he is meant here), also known in Poland for, among others, his daring novel War and Turpentine, resolved to settle into the local community, to develop an intimate relation with the landscape, get a feel for the flavours of sun-scorched rosemary and thyme, and hearken to the voices of the past. Local legends and neighbours’ tales inspired him to explore by himself. With time, this became his creative obsession. Hertmans began to see ghosts in the waking state. He gave them names and realised the meanings of their journey. Rummaging through sources and supported by his own imagination, he reconstructed the complicated life story of a woman who had reportedly lived in that commune a thousand years before. This led to the publication, three years after War and Turpentine, of his next book, De bekeerlinge (2016), which soon came out in English as The Convert.

The book is neither a fictionalized documentary nor a historical novel. Hertmans’ narrative unfolds on several planes – temporal, spatial, and emotional. It takes us back to a time when, after a long period of relatively peaceful co-existence between Jews and Christians, something began to go wrong. It was the time of the first separate settlements, originally built on the initiative of both communities; the time of the early expulsions, and of massacres of the Jewish population in the years of the first and only successful crusade. The author remains in the present, recounting – in the convention of a meta-story – his own effort to come to grips with the town’s past and his countless attempts to solve its mystery. These two layers are bound by the surprisingly durable mortar of sensations and sensory experience. Descriptions of unimaginable suffering appear side by side with poetic images of beauty, while life smoothly passes into death, and vice versa. The world has not changed in the last thousand years; this is bad news. A pretext will always be found to crush the Other like a bug and to deprive him or her of their humanity. The world has not changed in the last thousand years; this is good news. Burnt down and gutted, it keeps arising from the ashes, and invariably it smells of thyme and honey, restoring, be it for a brief moment, the lost hope for a better tomorrow.

Details no longer count in this story. Hertmans makes no effort to conceal that he based his tale of the eponymous convert on flimsy evidence. Most researchers reject Norman Golb’s thesis that the toponym MNYW (appearing in one of the documents found in the Cairo Genizah, the storeroom in which worn-out or no longer used text from the Ben Ezra Synagogue were “buried”) refers to Monieux, in its medieval spelling as Moniou. There is much to indicate that this one of the ghastliest massacres of the Jews during the First Crusade took place in a completely different location, most likely in Spain. We have no way to relate these Cairo manuscripts to the story of an anonymous convert who married Rabbi David Todros of Narbonne against her parents’ will and later, for the sake of her love, lost her husband, children, and mind. As a writer, Hertmans has done what no historian would dare to do: He bestowed an individual identity on the hapless collective victim. He called her Vigdis Adelaïs, a Christian descendant of the Norman Vikings, who was reciprocally in love with a yeshiva student at Rouen and embraced his faith, which proved to be her undoing. The names that Hertmans gave her are telling ones: Vigdis – a Norse ‘war goddess’; Hamutal – interpreted in The Convert as ‘the heat of dew’, though the Biblical associations of this Hebrew name are rather different and more patriarchal; and the Egyptian Galana, which only refers to the alien blurry blue of her eyes. He bestowed on her the fate of other women, either born Jewish or converted to Judaism – torn alive to bits and pieces, murdered in their own homes, or begging to be spared the sight of their children being slaughtered by their husbands; eventually losing their faith in God and hope in humankind. 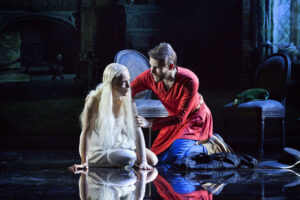 The Flemish composer Wim Henderickx immediately sensed the operatic potential of this tale. We are told that it took him just a few days for Vigdis’ tragic story to take shape in his mind. The painstaking task of adapting the novel into a libretto was taken up by Krystian Lada. The pandemic proved to act as an unwanted and humility-inspiring ally to this project. Henderickx’s nearly three-hour-long work evolved under the strict lockdown conditions and was premiered in the first half of May at Antwerp’s Vlaamse Opera.

Though Lada had already tried his hand at libretto writing, this is apparently his first attempt at a work of such dimensions, which moreover called for a precise translation of the author’s intentions into the language of musical theatre. There are virtually no dialogues in Hertmans’ book. Its radically subjective narration had to be rarefied, stripped of the author’s commentaries, and transformed into a sequence of intimate monologues separated by snatches of prayers, rituals, and heartrendingly sad lullabies. The universal lot of Vigdis/Hamutal has been enclosed in the words of a moving ballad that returns like a refrain, bringing relief at the moments of greatest suffering. This was clad by Henderickx in a suitably timeless melody of his own (“Once upon a dream / there was a princess unseen / there was a Love unspoken / But God stood in between”). In contemporary operatic libretti, it is very rare for the audience to leave the theatre with a motif that remains so profoundly memorable to both the ear and the heart, one that smoothly carries the narration forward, releases and spins the tale in accordance with the author’s wish, defining the beginning and the end of the whole story.

Lada’s libretto, whose ragged and fragmentary character paradoxically enhances its grip on the imagination, has received a wholly appropriate musical setting from Wim Henderickx, a composer who, despite his training at the IRCAM in Paris and the Darmstadt Summer Courses, has boldly followed his own path, primarily inspired by the Hindu raga and the distinctive rhythmic patterns of traditional African music. It is indeed a rare phenomenon for a Western composer so skilfully to incorporate instruments from other musical cultures into the texture of a large orchestra (efficiently conducted here by Koen Kessels). These instruments are the Arabian oud, the Middle-Eastern zither called qanun, and, most prominently, the double-reed duduk, sobbing in the voice of all the victims of the great Armenian genocide under the Ottoman empire. 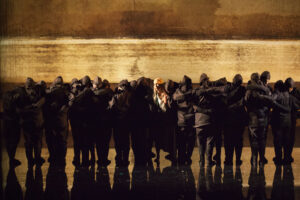 Hendericxs is equally skilful at managing the orchestra as he is at the use of human voices, both in the solo and choral parts. Casting the Belgian soprano Lore Binon in the role of Vigdis was an excellent idea. Her pure, fleshy, and richly expressive voice, well tested not only in Baroque music but also in art song repertoire and in the works of Schönberg and Mahler – proved an exceptionally accomplished vehicle to convey the ‘otherness’ of this tragic figure lost in the melting pot of cultures. Vincenzo Neri was her worthy partner in his fourfold role as David, Shipowner, merchant Embriachi, and Commander. His soft, beautifully rounded baritone is coupled with an excellent stage presence. The very young velvet-voiced South African baritone Luvuyo Mbundu truly shone as Rabbi Obadiah. The fine acting and great vocal ability of Spanish tenor Daniel Arnaldos likewise deserves a kind mention, particularly in the part of Pope Urban II. There were virtually no weak points in the cast, except for the otherwise outstanding Sephardic singer Françoise Atlan, for whom the burden of four hard, fully operatic parts that the Convert composer entrusted her with proved a bit too much. The choirs deserve separate praise, especially the members of the amateur community ensemble Stadskoor Madam Fortuna. 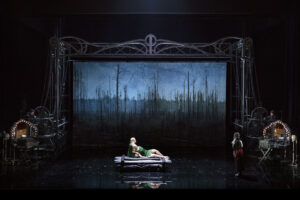 Wim Henderickx’s De bekeerlinge is a work accessible to the ear, but also extremely skilfully composed, demonstrating a great sense of orchestral colour and fine balance between the stage and the pit. As for the few long-drawn-out bits, the director Hans Op de Beeck turns out to be the one to blame. He is an eminent visual artist, but a rather less competent director, especially in the opera. The idea of limiting nearly all the stage design to splendidly painted horizons moved by means of hand-operated machinery visible on the stage would have been much more successful had he not ordered that each of the eleven scenes be preceded by a compulsive and fundamentally redundant change of scenery. The other stage events, apart from the shocking episode of raping Vigdis’ doll double, seemed superfluous and not very well thought out.

At a meeting before the premiere Stefan Hertmans spoke with approval about the reduction of the novel’s material. He also appreciated the idea of having the Jewish Kaddish heard in the final scene, after the tormented Vigdis’ death in the ruins of the Moniou synagogue. Frequently wrongly identified with a prayer for the dead, the Kaddish is, after all, a prayer for life, the most important part of collective devotion in Judaism, and a hymn of praise for God present in the energy of all the departed ones. This world will come back to life: in the fragrances of Rouen, the flavour of Provençal lavender, and the golden brilliance of Egyptian oases. Only why so much suffering, and so little love? Why such an ocean of contempt? And what is the point of converting if there is no one up there to listen?