There was a time when Mozart’s oeuvre was put above the music of the good old Haydn. There was also a time when Haydn’s Creation was valued more highly than his Seasons, although in any case both oratorios were considered masterpieces in comparison with Il ritorno di Tobia, composed more or less a quarter of a century earlier. According to Charles Rosen, in neither of the two works did Haydn achieve the level of his quartets and great symphonies, and after completing The Seasons he even experienced an artist’s block, too old and too weak to hold on to even a fraction of the ideas rushing into his head. It is as if the master, who was not yet seventy, reached a point when he had ceased to refer to anything except his own experience and own impotence.

Rumour also had it that Gottfried van Swieten, author of the libretti to both The Creation and The Seasons, in vain tried to persuade Haydn to close the cycle with a third oratorio, The Last Judgement. Yet a letter by Georg August Griesinger – Haydn’s diplomat friend – to Empress Maria Theresa suggests something quite different: that the initiative came from the composer, who asked Christoph Martin Wieland, called the German Voltaire, for a libretto. Wieland refused. Thus it would be hard to lay the blame for the fiasco on the artist’s block afflicting Haydn – after all, he went on to write two magnificent masses, Schöpfungsmesse  and Harmoniemesse, and fell silent for good five years before he died.

However, there is no denying that it took him two years to write The Seasons and that at times the work was hard going. What undoubtedly contributed to this were the composer’s health problems as well as the libretto by van Swieten, who this time clearly bit off more than he could chew. He took as his basis James Thomson’s extremely popular poem The Seasons, although a lot suggests that he first went for Barthold Heinrich Brockes’ German translation and on its basis produced the text of the oratorio, spicing it up with numerous additions from other sources and with his own imagination. What emerged as a result was a rather misshapen work, in which the charm of the original was lost, while van Swieten’s deficient skills were revealed to the full. If that had not been enough, van Swieten, despite his poor command of the language, undertook, like in the case of The Creation, to translate the libretto into English, which produced an even more inferior result than before. Suffice it to say that until recently British artists used to perform The Seasons in German, because the “English” original would have listeners break into uncontrollable laughter. There were several more or less fortunate attempts to make van Swieten’s libretto palatable until Paul McCreesh came up with his own, exceptionally graceful translation, which may stay in concert repertoires for good. 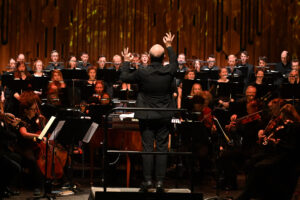 Laurence Cummings used the translation – to the benefit of the work and much to the delight of the audience gathered at London’s Barbican Hall – during the inauguration of the second season of the Academy of Ancient Music under his leadership, in a dramatised performance of the oratorio with stage movement by Martin Parr presented against the background of pleasant but in fact unnecessary projections by Nina Dunn Studio. I reviewed last year’s Creation, inaccessible to observers from outside the United Kingdom because of the covid restrictions in place at the time, on the basis of a broadcast. This time I decided not to miss an opportunity to hear the AAM in The Seasons live, especially given that I had had intense previous contact with McCreesh’s translation, translating it into Polish for a CD booklet for Signum Records.

Haydn was undoubtedly right, when he demanded that his oratorios be performed in languages understood to local audiences. That is why the premiere of Die Jahreszeiten was very warmly received at the Palais Schwarzenberg in Vienna, while The Seasons with the original version of the libretto was not performed even once in the composer’s lifetime. This is a work carried by text: only in symbiosis with the word does it reveal its true nature. Only then does it pave the way for the listener to understand the refined harmonic and textural devices, justify numerous self-quotations, make it possible to appreciate the novelty of solutions soon after used in the oeuvres of Beethoven, Weber, Schubert and even Wagner. Only on this condition does it reveal the tribute to the prematurely deceased Mozart hidden between the lines: when a theme from the Requiem appears in the triple fugue from Spring, when Sarastro’s wisdom resounds in Simon’s singing, when we can hear the voices of Papageno and Papagena in the love duet between Hanne and Lukas from Autumn, when in Winter a quotation from the second movement of the Great Symphony KV 550 appears with the words about the passing summer of human life. 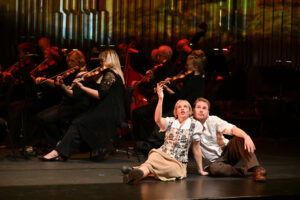 For nearly half a century the sound of the Academy of Ancient Music evolved under the influence of two distinctive musicians with extremely different personalities: Christopher Hogwood and Richard Egarr. Laurence Cummings has added another important element to the identity of his ensembles: an irrepressible joy of music making, an enthusiasm that makes it possible to become engrossed in the rhetorical intricacies of the score. The AAM chorus not only impresses with its excellent voice production and impeccable diction; it savours its singing and imbues it a powerful emotional charge. Each instrument in the orchestra speaks with its own conscious voice – when necessary blended and balanced with the sound of the rest of the ensemble, at other times unceremoniously highlighted, surprisingly bright, saturated in the extreme, balancing on the edge of ugliness. There is dazzling brightness and deep darkness, the heat of the sun and the cold of the ice in this playing – everything needed to convey the changeability of the seasons and the inexorable cycle of earthly existence.

Of the three soloists I was the most pleasantly surprised by Rachel Nicholls, who replaced the indisposed Sophie Bevan at the last minute. I must confess contritely that I had my doubts whether the soprano, who has been scoring triumphs in the Straussian and Wagnerian repertoire for several years, would be able to find her way back into the long-abandoned idiom of pre-Romantic music. I am critic of little faith: Nicholls is perfectly capable of embedding her supple, radiant voice in a very different style of singing, phrasing in line with all the classical rules, flashing lightly through long passages and embellishments. Similar brilliance came from Benjamin Hulett’s tenor, silvery and bright, impressing both with confident intonation and wide, open breathing, allowing the melodic line to be free and expressive. The ardour of the two young lovers found a perfect counterbalance in the dignified singing of Jonathan Lemalu, marked by the wisdom of mature age. With his warm and velvet soft bass-baritone Lemalu was able to paint each affect with a slightly different hue, to outline each reflection with a line of different thickness. 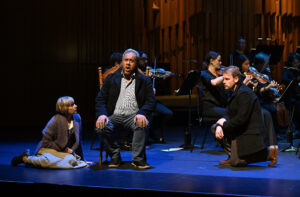 In May 1809 the Napoleonic army set off against Vienna. The city surrendered after a brief and uneven fight. The ailing Haydn collapsed at the piano one day and never got up from his bed. He died on 31 May, shortly after midnight. His last words are circulated in several versions. After listening to The Seasons at the Barbican, I am willing to believe that shortly before he died he said: “Cheer up, children, I am all right”.