This was once the place where the madness of Shakespeare’s Macbeth started. Today Inverness is regarded as one of the happiest cities in Scotland. It is located in beautiful surroundings, like the legendary castle of the Thane of Cawdor, and has cheerful residents – people proud of their community, passionate about the local nature, happy with city’s the social and cultural offerings. Two and a half years ago I had an opportunity to see the enthusiasm with which they welcomed another venture of the Mahler Players chamber orchestra under its founder Tomas Leakey – a concert featuring Schönberg’s Verklärte Nacht in an authorial version for string orchestra, and the first act of Wagner’s Die Walküre arranged by Matthew King and Peter Longworth for an ensemble of just twenty-something musicians. Six months later Leakey presented two symphonies by Sibelius with a similar line-up. During the lockdown he recorded the first album with his ensemble – of the symphony Richard Wagner in Venice commissioned from King and based on the composer’s late, fragmentary drafts. That debut CD caused quite a stir on the UK record market and received excellent reviews, including one by myself. After the restrictions were lifted Leakey found time to regale his fellow Highlanders with chamber versions of symphonic works by Beethoven and Mahler, before returning to his “Wagner Project”: more experienced thanks to a Bayreuth scholarship funded in 2020 by the Wagner Society of Scotland.

When he wrote to me that this time he had prepared, together with King and Longworth, the second act of Tristan, and assured me that Inverness was just as beautiful in December as it was in June – with just the day being shorter – I immediately accepted the invitation. On the day of the concert I took a long walk in the morning along the shore of the Moray Firth to watch waves as heavy and leaden as those on which Tristan, mad with longing, watched out for Isolde’s ship. I returned through Merkinch, a neighbourhood in which the poor once lived and which struggled with the nightmare of the last great famine in Scotland, as Wagner was writing his Tristan. In the evening I turned up at the Gothic Revival Cathedral of St. Andrew, consecrated less than a decade after the premiere of the opera. I thought I knew what to expect, especially given that the cast included the performers of the title roles from the 2017 revival of Tristan at Longborough – an experience after which I nearly died of an excess of emotion – as well as the legendary singer Sir John Tomlinson, one of the best Wotans in Bayreuth’s post-war history and King Marke in the 1993 production conducted by Barenboim. Now Tomlinson was to take on the role again, almost thirty years after his Tristan debut on the Green Hill. 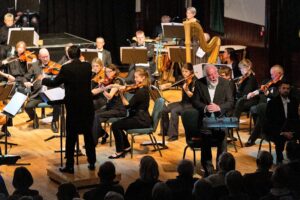 Leakey planned the concert without an interval, preceding the second act with the Prelude to the opera, and closing the whole with the Introduction to act three and the final “Liebestod”. My first surprise came from the sonic richness of the arrangement, written for a slightly larger ensemble than in Die Walküre, but still consisting of only thirty-six musicians. King and Longworth did not follow the path chosen by Matthias Wegele in last year’s “pocket” Tristan from Vienna: Wegele preferred to dispense with several key instruments, including the harp, and to build the texture from scratch as it were – with intriguing results, although in some ways closer to the aesthetics of modernism. The authors of the arrangement for the Mahler Players decided to remain faithful to the score and to reduce it in such a way that the listeners would have the impression of hearing the work played by the full cast. This is by no means easy, which makes King and Longworth’s stylish and balanced version – with only occasional imbalances to the detriment of the strings – all the more admirable. On the other hand I’m not sure whether such imbalance can be avoided in any reduction of Tristan, if Wagner himself stressed the importance of the numbers and sound quality of the quintet in the score.

The Inverness performance was a typical concert, with soloists singing from their music stands. And this brought another surprise for me: Peter Wedd, the Tristan incarnate, an artist who had twice brought the LFO audience to its knees, not only with the beauty of his voice, but also with his extraordinary musicality and phenomenal acting, this time did not even try to at least make eye contact with Lee Bisset. He sang as if inwards, with great concentration and with some vague sadness, without the youthful ardour he had in Longborough. I had the impression that Wedd was saying goodbye to his protagonist, slipping, as it were, into his death; that he was not so much asking Isolde to follow him into the darkness of the Night, as plunging into it himself – resigned, broken, unwilling to die. I find this contrary to the letter of Wagner’s text, although I must admit that the performance itself was captivating. Wedd’s dark tenor continues to gain in vividness, especially in the lower register, and his high notes sound strong and confident, although they sometimes seem a little dim. By contrast, Bisset’s singing, despite some technical shortcomings (minor intonation problems at the beginning of the act) seemed all the more human, warmer, more effective as a vehicle for what are, after all, diverse emotions. However, I got the impression that they were both polishing each phrase with such abandon that they lost the text of the libretto along the way. I put this down to the capricious acoustics of the church.

But then Tomlinson stood up from his chair and sang “Tatest du’s wirklich?”. Suddenly every word – perfectly articulated – struck painfully like a dagger. I had not encountered such a harrowing portrayal of King Marke since Matti Salminen’s Budapest performance. I wrote at the time that Salminen gave an unsurpassed model of profound interpretation marked by the wisdom of age. Now I have two models, completely different and equally unsurpassed. The Finnish bass’ Marke was full of bitterness and resignation. Tomlinson was alternately seething with rage and writhing with humiliation. His piercing “warum mir diese Schmach?” sounded like a roar of a wounded animal. I wish every Shakespearean actor had such an ability to control the degree of tragedy as this singer, who is no longer young and has a voice that has lost its former lustre, but who uses it masterfully, with an incredible feel of all its strengths and weaknesses. My respect for Tomas Leakey increased exponentially. It takes an extremely modest and sensitive person to persuade such an artist to participate in such an unusual venture. 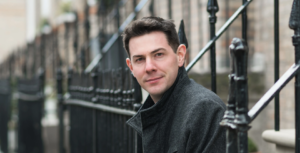 A separate round of applause should also go to two young singers, especially the velvety-voiced Laura Margaret Smith, whose Brangäne was touching if somewhat shy – this was fully understandable as Smith replaced the much more experienced Alwyn Mellor in the part at the last minute. Frederick Jones had little to sing as Melot, but he did so with conviction and a nicely placed, handsome tenor.

Given the difficulty of the undertaking, the orchestra performed admirably well – under the careful but demanding hand of Leakey, who opted for rather uncomfortable, firm and unhurried tempos in a couple of crucial passages. If he was testing the capabilities of his musicians, they came out of the test victorious. They played wisely and sensitively, were not explicit and preserved the work’s inherent mystery. They managed to sum up Tristan in a form in which it was interpreted by Karol Berger, who wrote that “if the effect of Wagner’s opera is consolatory, it is not because of what it says about the human lot, but because it says something important about it at all”.