Thus reads the diary of the Queen’s Westminster 16th regiment for 25 December 1914. On the Western front, a positional war was in progress – the parties to the conflict were facing each other in a continuous line of trenches, shelters and barbed wire entanglements. The night before – near Ypres, where the first major battle of the Great War had played out a month earlier – a little group of privates and non-commissioned officers had made a spontaneous attempt at fraternization. The initiative had come from the Germans, who had decorated their trenches with lights, and then begun to shout out holiday wishes to the Welshmen dug in on the other side. Shortly thereafter, they began singing carols together. Then the soldiers moved on to the sadder part of Christmas Eve – they buried their fallen in a common grave on neutral ground, finishing the ceremony with a performance of Psalm 23 accompanied by a bagpiper from the Gordon Highlanders 6th battalion. The officers proclaimed a truce until dawn of the second day of the holidays, commanding their subordinates to remain in their trenches. The soldiers did not obey – for the whole next day, they exchanged provisions, alcohol and little presents in the strip between the fortified lines. Reportedly, they even played a football match. After the truce was over, they didn’t even think of returning to battle. At some points on the front, they managed to extend the cease-fire up to 3 January. The idyll in the trenches was cut short by snipers shooting at anyone who tried to get through to the enemy side. From that moment on, the commanders moved their divisions from place to place more often, in order to prevent further incidents of fraternization with the enemy.

This truce really did happen, and has been commemorated in dozens of plays, songs, novels and films. Kenneth Branagh wove it into the action of the cinema version of Mozart’s Die Zauberflöte, which was transported into oneiric scenery from the Great War. In 2005, it served as the basis for the war film Joyeux Noël directed by Christian Carion. A few years later, Mark Campbell refashioned the film script into the libretto for the opera Silent Night, commissioned by the Minnesota Opera in a co-production with Opera Philadelphia. The music was composed by Kevin Puts, a just under 40-year-old graduate of the Eastman School of Music and Yale University. The world première in November 2011 at the Ordway Center for the Performing Arts in Saint Paul, Minnesota was received with thunderous applause. A year later, Puts’ debut opera received a Pulitzer Prize. In 2014, it saw a staging in Wexford. Three weeks ago, as part of musical celebrations of the 100th anniversary of the armistice in Compiègne, it came to Opera North, presented in a semi-staged version in the auditorium at Leeds Town Hall, a building which – in the opinion of Zygmunt Bauman – imitated simultaneously ‘pharaohs’ palaces, Greek temples and princes’ courts’. 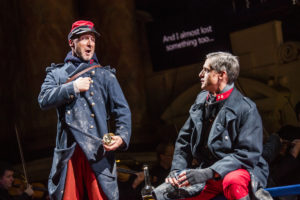 Yes, Puts’ music is rather a brilliant pastiche than the product of the composer’s original creative imagination. It is true that Campbell’s libretto rehashes an array of cultural and literary stereotypes. But nevertheless, the one combined with the other is electrifying – it touches the most sensitive strings of the viewer’s heart, reflexively bringing before the eyes a picture of the war that destroyed the bodies and souls of millions of people, trivialized violence and brought to life the demons of totalitarianism. Puts masterfully builds up and then stratifies the narrative. The pseudo-Mozartean duet in the prologue, when the decision to invade Belgium and France interrupts a show at one of Berlin’s opera houses, drowns in a massive orchestral sound that brings to mind associations with the scores of Stravinsky and Varèse. In the extraordinary aria of French lieutenant Audebert – who cannot concentrate on counting up the losses in his division, broken as he is by longing for his wife and their baby born in his absence – one hears ominous echoes of Pelléas et Mélisande. The sonic atmosphere in the German trenches is dominated by references to the idiom of Richard Strauss; and in the British ranks, to the œuvre of Britten. What emerges from an apparent chaos of wartime lullabies, sung simultaneously in three languages, is a masterful, charmingly peaceful polyphony.

If this work were staged without conviction, it would border on kitsch. However, the soloists and ensembles of Opera North treated it in a manner consistent with its creators’ intentions: as an homage to a Europe that no longer exists and has passed into oblivion, taking with it polished forms, conventions and styles. Silent Night talks about this Europe in a language that would easily have reached the hearts of the men going into the trenches like cattle to the slaughter, and the women left at home quaking at the sound of each knock on the door. Stage director Tim Albery got this and resisted the temptation to ‘literalize’ the battlefield scenes, focusing instead on very precise definition of the characters and collective protagonists. The soldiers gathered on the auditorium stage are separated by a distance symbolic rather than physical – highlighted by the differences in uniforms and accessories (superb costumes and very economical stage design by Hannah Clark), the language barrier, the peculiarities of body language. The space dividing up the individual groups of choristers and orchestra musicians brings to mind associations with a dense network of ditches and trenches. There is neither blood nor spilled guts, but even so, one can see who is dead (the wonderful scene in which a few soldiers lie down onstage as if to sleep; a moment later, their comrades in arms come to bury them). The rest is filled out by suggestive lighting (Thomas C. Hase) and fragments from historical film chronicles projected onto the façade of the City Hall organ. 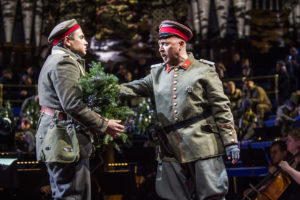 Essentially all of the singers – except perhaps for Máire Flavin, whose soprano is not sufficiently focused and beautiful to be convincing in the role of great opera diva Anna Sørensen – managed to create memorable characters. Gifted with a clear, highly resonant tenor, Rupert Charlesworth phenomenally conveyed the transformation of Nikolaus Sprink from an idol of Berlin’s stages to a soldier broken by the cruelty of war. Dutch baritone Quirijn de Lang, impressive in his subtle and cultured phrasing, turned out to be ideal in the role of the melancholic Audebert. Richard Burkhard and Adrian Clarke were perfect in the other two baritone roles: Lieutenant Horstmayer and Father Palmer. The audience’s heart, however, was stolen by Geoffrey Dolton in the role of Ponchel, Audebert’s orderly, who made the best coffee in the world, carried an alarm clock in his bosom so as not to forget about his family home, and finally fell victim to friendly fire while returning from a secret visit to his mother behind the German front line. The entire musical narrative was deftly taken in hand by Nicholas Kok, who united the Opera North orchestra and several choral ensembles under his baton. 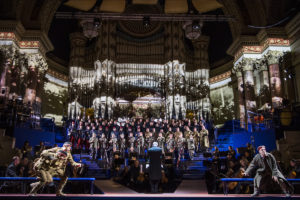 In one of the final scenes of Silent Night, Ponchel dies in Audebert’s arms and passes the message to him that his newborn son’s name is Henri. A moment later, the furious French general disciplines Audebert and, as punishment, sends him to another military operation post. Audebert is the general’s son. His father sends him to Verdun – a place even a lame dog has never heard of, where the lieutenant will have no opportunity to fraternize with the enemy. Thus ends this opera about a short reconciliation with tragic consequences. Thus ends hope that the melancholic lieutenant will ever return from the front and meet his child. Thus begins the bitter irony of the Great War that was meant to put an end to all wars.