As a child, I was led astray. It happened at a certain artists’ house where we often went in the off-season, for my father had a laid-back attitude toward his children’s compulsory education. For lack of children my age, I filled up my time independently and made friends with the lady who ran the local library. There were only two kinds of books there: academic publications in the field of art history, and crime novels. The librarian – figuring that the former were too difficult for me – enthusiastically introduced me to the world of Sherlock Holmes stories, American noir fiction and Agatha Christie mysteries. Thanks to such an early initiation, I still have a weakness for thrillers and crime novels. This is why I have observed with growing interest the collaboration of Scottish composer Stuart McRae with Glasgow-resident writer Louise Welsh, who debuted in 2002 with a dark novel entitled The Cutting Room and quickly gained renown as a master of the psychological thriller. To date, the tandem has realized three suspense operas: the barely 15-minute Remembrance Day (2009); the one-act Ghost Patrol (2012), nominated for the Olivier prize; and an opera in four scenes entitled The Devil Inside (2016), based on Robert Louis Stevenson’s The Bottle Imp – unanimously considered one of the biggest events of the season at the Scottish Opera. 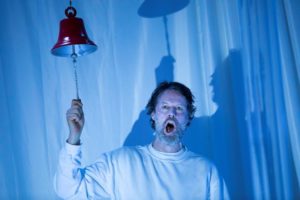 We did not have to wait long for the next fruit of their collaboration. This time, McRae and Welsh decided to create a real opera: over two hours in length, comprised of three acts, with eight soloists and a quite sizeable orchestra. The main source of inspiration for Anthropocene – which had its world première a week ago in Glasgow – was the feature-length Danish documentary Expedition to the End of the World, directed by Daniel Dencik. The film, which is breathtaking in its imagery, tells the story of an unusual expedition to the fjords of northern Greenland. Aboard the traditional three-masted schooner were not only scientists, but also artists. Dencik recorded their conversations, which at a certain moment morphed into an amazing debate on human nature and the place of humanity in the natural environment. Welsh was fascinated, above all, by the motif of the ship as an enclosed micro-world, a peculiar miniature of societal life and the rules that govern it. The romantic sailboat was replaced by an ultra-modern research unit named ‘King’s Anthropocene’, on which a married couple of academics (Professor Prentice and her husband Charles) in quest of ice samples for research sailed in the company of the endeavour’s narcissistic sponsor Harry King; his spoiled daughter Daisy, an amateur travel photographer; a journalist and sensation-hunter named Miles; the ship’s engineer, Vasco; and Captain Ross, the ship’s commanding officer. The plot’s point of departure is a sudden break in the weather at the end of the Arctic summer. Three people who have disembarked onto the ice sheet to take samples are delayed in returning to the ship, which is consequently immobilized in the frozen fjord. The stragglers finally reach the ship and come back on board, dragging with them a huge block of ice with a human body frozen inside. At night, in a blaze of northern lights, Daisy detects some kind of motion above the surface of the ice block. Vasco crushes the block to pieces. From inside, a young woman wrapped in white breaks out in convulsions. Indubitably alive.

In the further course of the narrative, there appear Biblical threads, allusions to Mary Shelley’s Frankenstein, Inuit mythology and several Shakespeare plays, chief among them The Tempest. The sharply-drawn characters – disoriented by the presence of the mysterious being, condemned to a long wait for rescue, or perhaps even death amid the ice – helped the creators to build tension and bring the matter to a cruel, simultaneously pessimistic finale. Before we discover that the girl – called simply Ice – is in fact a beloved daughter sacrificed by her parents to deliver their fellow countrymen from bondage to the frost, a tangle of tragic events will take place aboard the ship. The researchers will understand too late that, in freeing Ice, they have brought her sacrifice to nothing. For ‘King’s Anthropocene’ to return home, blood must again be shed. Except that Ice was once sacrificed in a feeling of love. At the heart of the new ritual will lie hatred. The ice will melt, Ice will escape from the dangerous ‘tribe’ of conquerors, and those who remain alive will await deliverance not with hope, but with fear. 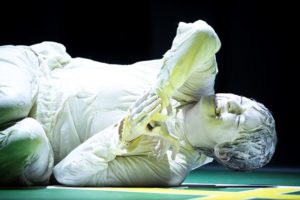 This sounds like the synopsis of a thriller script rather than an opera libretto. And the entire endeavour could have ended in catastrophe, were it not for the phenomenal collaboration of all of the artists involved. Stuart McRae is an experienced, word-sensitive composer of stage music, and an unparalleled master of orchestral colour. Each of the protagonists of Anthropocene was provided with a different vocal language: the tenor part of Harry King (the superb Mark Le Brocq) at times resembles a vivid Baroque aria; the mistrustful Captain Ross (the somewhat bland-sounding Paul Whelan) speaks in the short sentences of a character taken, as it were, straight from the ‘marine’ operas of Britten; the velvet-voiced Vasco (Anthony Gregory) in the flirtation scene with Daisy (the convincing Sarah Champion) falls into a pastiche of Elizabethan song. Ice (the phenomenal, crystal-clear and cool-timbred soprano Jennifer France) alternates between spinning out unearthly vocalises in the top register – flowing, as it were, from another dimension – and emitting short, breathy phonemes that ring with the torment of a being restored to life against her will. The warm and passionate soprano of Jeni Bern (Prentice) forms a clear contrast with the commanding baritone of Stephen Gadd in the role of her husband Charles. The character of the arrogant journalist Miles – the accidental killer of Vasco, in the finale sacrificed by Prentice – was taken on with bravado by Benedict Nelson, to whom McRae entrusted a role thick with conflicting emotions. Compared to the Scottish composer’s earlier works, the music of Anthropocene conveys the impression of being a bit more conservative, but nonetheless consistent in terms of dramaturgy: ideally balanced between modality and tonality; in the northern lights scene, brilliant in the lightness of the shimmering orchestral texture; in the final storm, crushing with its mass of ambiguous sonorities moving towards the culmination. The most beautiful fragment of the opera, however, turned out to be Ice and Prentice’s duet from the penultimate scene of Act I: a true theatrum doloris, as it were from a 21st-century Pergolesi, full of painful tensions between dissonance and consonance, built on a background of ostinato figures in the strings and harp. 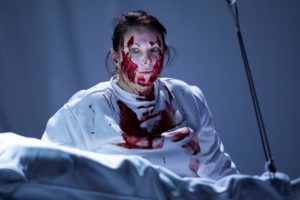 Unfortunately, the staging did not always keep pace with the text (which was flawlessly declaimed by the singers) or with the music as a whole, which was under the care of the dependable, as usual, Stuart Stradford. Stage director and lighting designer Matthew Richardson, who has been working with the McRae/Welsh tandem since the première of Ghost Patrol, followed an otherwise justified path to convey the boundlessness of the Arctic with large sweeps of white; in so doing, however, he lost the mystery of this inhospitable land. Polar white sparkles in a thousand shades – in Richardson’s concept, however, it brought to mind rather associations with the sterility of hospital interiors, which he did not manage to overcome even with an image of the northern lights. The individual costumes and elements of the stage design (Samal Blak) – legible in the symbolic layer and sometimes very expressive as a theatrical symbol (the ghastly dummy of a skinned seal hung up head downward; the signs marking communication routes on board the ship, in Act II replaced by streaks of blood) – are not arranged coherently in space. So it is with all the greater admiration that I found the dramatic tension of the narrative could be felt and heard even with my eyes closed – thanks to the ideal combination of word with sound, and the masterful construction of the score.

Several melodies and phrases from the libretto – especially in the role of Ice – are running through my head to this day. That ‘Father’s knife [which] screamed against the whetstone’. The final words of the departing Ice, which sound like a curse (‘You are not my tribe’). Is the Anthropocene – the time of humanity’s reign – really supposed to turn out as the final, shortest era in the history of life on Earth? It might end up that way if we do not ponder in a timely manner the pitiful fate of Doctor Frankenstein and his contemporary imitators.