The story of the fall of an aging writer – whom Thomas Mann called Gustav von Aschenbach – is not a confession of the author, but a symbolic parable of a man whose well-ordered life was shattered by an encounter with a vision of pure beaty. Today, over one hundred years after the publication of the first edition of the novella, the most often cited sources of its inspiration are Mann’s personal experience at the Grand Hôtel des Bains on the Lido, where in 1911 he encountered a boy of “truly divine beauty”; the shock of Gustav Mahler’s untimely death, about which Mann heard on his way to Venice; and finally his fascination with Freud’s theory of dreams and with the Apollonian-Dionysian conflict in Nietzsche’s philosophy. This image of Death in Venice has become firmly fixed in our collective imagination under the impact of Visconti’s famous film adaptation – sufficiently distant from the original to overshadow perhaps the most significant of the impulses behind Mann’s masterpiece.

That impulse was the death of Richard Wagner, who, unlike Mahler, really did die in Venice: in 1883, the year in which Robert Koch identified the bacterium responsible for the recurring cholera epidemics. The same plague which claimed Aschenbach’s life and which became a vehicle for additional symbolic meanings in the novella. Although the protagonist of Death in Venice inherited his first name from Mahler, his surname leads by a series of associations to Wolfram von Eschenbach, the author of the epic Parzival, on the basis of which Wagner wrote his last operatic masterpiece. The beautiful Tadzio with his strange “hazy-gray” eyes is also a figure of the pure fool Parsifal, who saved Amfortas from his suffering, so why shouldn’t he relieve the anguish of the aging writer? It is surprising how many of these tropes are missed by the commentators on the novella, given that Mann constructed his Buddenbrooks in the image and likeness of Wagner’s Ring and put words imitating Lohengrin’s farewell to the swan into the mouth of one of the woodcutters encountered by Castorp in The Magic Mountain. 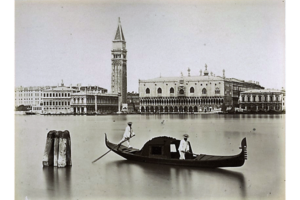 Carl Naya, The Molo and the Doge’s Palace with Gondola, Venice, albumen print on paper, before 1882. McLean Museum and Art Gallery, Greenock

Wagner returned to Venice once again in September 1882, less than two months after the premiere of Parsifal. He rented the entire first floor of Ca’ Vendramin Calergi, a Renaissance palazzo on the Canal Grande, from Enrico, Count de ‘Bardi, and moved there with Cosima, four children and servants. In October they were joined by Liszt, just as ailing and with a similar obsession of death as his son-in-law, barely two years his junior. Both men would look out of the palazzo windows, watching the gondolas – “black as only coffins can be”, to quote Mann again – gliding along the canal. Some of the gondolas were transporting corpses to the cemetery island of San Michele. In December Liszt sketched the first version of La lugubre gondola. In January he left for Budapest. Wagner died in February and his remains were transported on a funerary gondola to to the Venezia Santa Lucia station, from which they were taken by train to Bayreuth.

Thomas Mann was an indefatigable music lover. He did not miss the premiere of Mahler’s Symphony No. 8 or that of Berg’s Lulu over three decades later. When arranging his numerous itineraries, he always tried to include visits to the local opera houses, and he followed the careers of his favourite singers and conductors. He never recovered from the rapture he experienced as a young man in Lübeck during a performance of Lohengrin. Wagner’s oeuvre shaped his musical sensitivity, left its mark on his prose and took hold of his emotions and imagination. In my case the first attack of the “Wagner disease” coincided with my fascination with Mann’s writing while I was still at school. I feel the effects of this double illumination to this day. Longing for the aesthetic which Mann used to adhere to, I avoid mainstream performances and try to track down Wagnerian rarities. I follow musicians whose love for Wagner takes the form of a sophisticated intellectual game.

This is how I found myself in Inverness in 2019, attending a concert of the Mahler Players conducted by Tomas Leakey, who constructed the programme for the evening of Schönberg’s Verklärte Nacht and Act I of Die Walküre in a chamber arrangement by Matthew King and Peter Longworth. On my return from Scotland, I wrote, in the introduction to my enthusiastic review, about the origins of the Siegfried Idyll, which is Wagner’s only work for chamber orchestra in the world repertoire. I also wrote about the musicians’ bold plans for the future, which included the premiere of a work by King based on late sketches from which Wagner intended to weave one day his own personal “symphonic dialogues”, alluding in their scope and form to the Idyll he wrote in 1870. 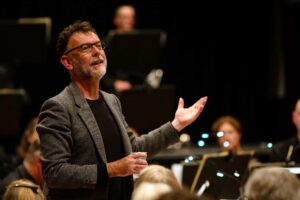 Despite the pandemic the planned premiere did take place and was also recorded on the first ever CD of the Mahler Players, who not without reason added Siegfried Idyll to King’s symphony Richard Wagner in Venice commissioned by them. Matthew King, a professor at London’s Guildhall School of Music & Drama, is not only an extraordinarily imaginative composer, but also a sensitive researcher into the relations between cultural texts, a master of what he calls “speculative musical archaeology”. His symphony is neither his own variation on a theme nor a mechanical patchwork of the surviving fragments. Instead, it brings to mind an erudite play with the spirit of the dead composer, as inspired as Salvatore Sciarrino’s unsettling adaptations of Baroque music, and at the same time – paradoxically – closer to the non-existent, unfinished original. King puts together these scraps of music – including the legendary “Melodie der Porazzi”, sketched by Wagner in 1882 in Palermo and evoking strange associations with the Verwandlungsmusik from Act I of Parsifal – using a method described in Cosima’s diaries and articulated by Wagner himself. He arranges them into a warm, intimate, proto-impressionistic narrative flowing in an even stream of musical tensions and releases. With memories of Tristan und Isolde and Die Meistersinger von Nürnberg echoing in the background of this conversation, the whole moves towards a coda in which the sound of the bells for the unveiling of the Holy Grail blends with the motivic material of Siegfried’s funeral music. Wagner is carried back to Bayreuth. A respectfully shocked world receives the news of his death – like in the last sentence of Mann’s novella.

It is difficult to determine today whether the fragmentary sketches from the last years of Wagner’s life originated with a larger work in mind, or a cycle of intimate poems modelled on the Siegfried Idyll. Or perhaps they are just testimony to the degeneration of an artist who, like Aschenbach, had to go astray? Whatever the case may be, Matthew King has breathed life into these fragments, developed them certainly not against their author’s intentions, and fashioned them into a whole that is not only convincing but also alluring. This is also thanks to Leakey’s musicians, playing with verve and a beautiful, selective sound, with British instrumentalists’ characteristic unity of intent combined with a diversity of individual tone. There is an admirable care for the context of the first meeting after a long lockdown and first recording of this extraordinary composition – in the Strathpeffer Pavilion in the north of Scotland, a Victorian building inspired by the architecture of the casino in Baden-Baden and thus, indirectly, the Bayreuth Festspielhaus. Visitors to that building include George Bernard Shaw, the author of The Perfect Wagnerite, a perverse philosophical commentary on Der Ring des Nibelungen.

It is worth reaching for the recording as a gift to yourself and to the ambitious Scottish musicians during this difficult time. And then worth returning to Death in Venice, which might also be a story of Amfortas, who did not live to receive the longed for blessing from Parsifal.