‘The past is today, just a little bit further away’, wrote Cyprian Kamil Norwid, eulogist of a present shaped by past experiences, of history understood as a trove of human experiences and emotions, in one of the poems from his collection Vade-mecum. Norwid was a poet of history, in which people often missed their purpose, thwarted by the irony of events. Yet in another poem, part of his speech on the freedom of expression (Rzecz o wolności słowa), he declared that he knew ‘something worse than crooked smiles, / Than cynicism, than irony: I know false earnestness!’ The fourth Polish national bard (after Mickiewicz, Słowacki and Krasiński) was aware that tragedy in everyday life is often intertwined with comedy. Although misunderstood by his contemporaries and posterity alike, in his work he answered many burning questions: how one can burst with laughter even in the darkest night, how drama is all the more gripping when accompanied by the grotesque and how one can survive mourning without losing grace and a sense of humour.

When Moniuszko wrote Straszny dwór (‘The haunted manor’), in the Kingdom of Poland, which was gradually being integrated into the Russian Empire, there were events grotesque in their monstrousness. In February 1861, during an anti-government protest on Krakowskie Przedmieście in Warsaw, five marchers died in clashes with the army: a locksmith, a journeyman tailor, a sixteen-year-old grammar school pupil and two landowners. Their funeral, held a few days later, turned into a demonstration by a crowd of 100,000. The cortege wound its way from the site of the tragedy to Powązki cemetery. Catholics walked arm-in-arm with Jews and Protestants. The patrols of Russian police and gendarmerie withdrew from the streets and allowed the mourners to march freely – only to unscrupulously crush another protest on Castle Square in April. This time, more than one hundred people lost their lives in the shooting.

Less than two years later, the January Uprising broke out. Its fate was ultimately sealed by the catastrophic Battle of Opatów, played out on 21 February 1864. At the beginning of April, the police arrested Romuald Traugutt, the dictator of the insurrection. After being interrogated for months, the indomitable commander was sentenced to death. He was hung on 5 August on the slopes of the Citadel, amid the unimaginable cacophony made by the crowd of praying Poles and the Russian military band that drowned them out.

Over the period between the funeral of the five victims of the first march and the tsarist amnesty of 1866, Polish patriots wore mourning weeds. A circular issued in March 1861 (after that funeral) by Antoni Melchior Fijałkowski, archbishop of Warsaw, included these memorable words: ‘Today and for many years, our emblem is a crown of thorns, the same one with which we crowned the victims’ coffins yesterday’. In the fervour of the uprising, the authorities issued the following directive: ‘a hat should be colourful, and if it is black, then it is to be adorned with colourful flowers or ribbons, not white under any circumstances. Black and white feathers with black hats are forbidden. […] For men, mourning is not allowed under any circumstances’. In order to get around the tsarist edict, women began wearing grey and purple and attaching coloured frills to black crinolines. Under their mourning dresses, they smuggled leaflets, gunpowder and ammunition.

Meanwhile, at the Grand Theatre (Teatr Wielki) in Warsaw, the occupying forces were having the time of their lives. Outside the building, they erected a scaffold; inside, they installed modern gas lighting and revelled in Jacques Offenbach’s Orphée aux enfers, interspersed with excerpts from Moniuszko’s Halka. Companies of Italian artists brought with them Verdi’s La traviata and Gounod’s Faust; Polish singers at the solemnities marking the tenth anniversary of Tsar Alexander II’s coronation all but choked on the anthem of the Russian Empire. Moniuszko wrote in a letter to his friend, the organist Edward Ilcewicz, dated 24 August 1865: ‘Meanwhile, I am urgently teaching The Haunted Manor, in order to get it out there at least a couple of times before the Italians invade. They want my finest opera! I’m of a different opinion. May I be wrong’. 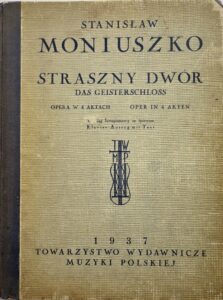 The composer began work on The Haunted Manor in 1861, together with the actor and director Jan Chęciński, librettist of his earlier work Verbum nobile. From the outset, the two men had in mind a comic opera with Polish accents, and they turned to the same anthology of Stare gawędy i obrazy (‘Old tales and tableaux’) by Kazimierz Wóycicki from which Włodzimierz Wolski had previously drawn inspiration for Halka. They based the plot on the ‘tale of the courtiers in the portcullis tower’, then supplemented it with allusions to Aleksander Fredro’s Śluby panieńskie (‘A maiden’s vows’, with Aniela and Klara’s resolution turned into Zbigniew and Stefan’s bachelors’ vow) and Zemsta (‘Vengeance’, with Papkin now Damazy) and to Adam Mickiewicz’s Pan Tadeusz (specifically, to Mickiewicz’s technique of blending the action with numerous scenes from everyday life and customs, but also to individual characters, with Maciej bringing to mind Gerwazy and the upright Miecznik as the alter ego of Judge Soplica), and also with sentimental excursions in the direction of Moniuszko’s first opera, led by the new mazur, the ‘little brother’ of the mazur from Halka. As initially conceived, this work was to have been a sort of development and continuation of Verbum nobile, about which Józef Sikorski wrote, after the premiere, on 1 January 1861, that it was ‘a splendidly dramatised genre scene. The principal idea that “a nobleman’s word is a sacred thing” is beautifully represented. […] music full of verity, and not infrequently inspired […]’.

Yet matters became more complicated after the January Uprising. Although the first sketch of the score was ready on Moniuszko’s return from Paris in 1862, the composer decided to shift the accents – in accordance with a motto that he had expressed in a letter to his first biographer, Aleksander Walicki, of 15 September: ‘if I love my work, then I love it as an honest means of contributing to the country…’ The Haunted Manor was transformed from a Norwidian ‘song of nature’, expressing a primal energy, into a moralistic song of weighty historical situations, a song of the nation’s social and political obligations. Stefan and Zbigniew manifest their patriotism in simple, soldierly words, backed by suitable illustrative music (‘Let’s preserve our hearts and resources / For our nation, as patriots should’). Miecznik’s aria sounds at times like a positivist manifesto of the post-uprising Polish intelligentsia (‘So the world sees from the start / His confidence and honesty. / Proud in bearing, pure of heart, / All-embracing he must be, / all-embracing he must be!’). Its complement of sorts, Hanna’s aria from Act 4, steers the listener’s thoughts towards female patriots dressed in black, about which the fashion magazine Magazyn Mód i Nowości wrote: ‘There are sacred things that must not be abused – mourning is among their number. Anyone who makes light of them or who uses them as simple instruments of vanity, who turns them into playthings, is truly guilty of sacrilege’ (10 March 1861). The opera culminates with Stefan’s phenomenal aria from Act 3, in which Moniuszko referred not only to his own childhood memories from Śmiłowicze (now Smilavichy, Belarus) near Minsk, sold to his grandfather by the Grand Hetman of Lithuania Michał Kazimierz Ogiński, but also to the scene of Tadeusz’s arrival at Soplica in Pan Tadeusz; above all, however, to the epilogue of Mickiewicz’s epic. One can hardly overlook the analogy between Mother Poland, which ‘in this hour / Art laid within the grave’ and the ‘My mother dear! / When you departed / Broken-hearted / With you died his simple air!’. The Haunted Manor, which preserved on one hand the qualities of the noble comedy with a dash of Romantic menace and on the other a musical equivalent of Jędrzej Kitowicz’s Opisanie obyczajów (‘Description of customs’), acquired a priceless extra dimension: that of an opera for the fortification of hearts bereft, a work about which an anonymous reviewer for the Gazeta Muzyczna i Teatralna wrote with unconcealed emotion: ‘some inner warmth, if I may put it like that, swept over us when we heard this music – so native, so very much ours that we felt involuntarily a certain solidarity with the composer, who seems to have extracted from the breasts of us, the listeners, some portion of our soul and adorned it, embellished it, arranged it in a wonderful whole and held it all up for us to admire. […] We would then advise that each [listener] in turn be stirred and reminded: ‘consider how beautiful it is”’ (13 October 1965). 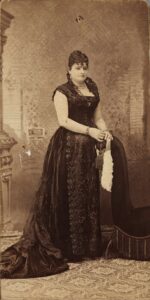 Moniuszko made it before that ‘Italian invasion’. The premiere – under his baton – was held on 28 September 1865, four months after the execution of Stanisław Brzóska, commander of the last unit of January insurgents. On 7 October, in a letter to Ilcewicz, Moniuszko reported, like a general from the battlefield: ‘So the third performance of The Haunted Manor is over, and the victory is resounding’. Yet that victory proved Pyrrhic: ‘But for dessert I kept back, like the dervish from the Arabian nights, cream tart with pepper. The Haunted Manor has been suspended by our mother censor. No one can guess why’. Although it may sound strange, there is no irony in the composer’s words. The tsarist censors were perfectly aware what they were letting onto the stage, they weighed up the risk under martial law and occasionally managed to turn a blind eye to an allusion smuggled into the text. ‘Our mother censor’ unerringly sensed when to take the work off the bill: after precisely three performances, received with such tumultuous applause that another might have ended in a riot.

The Haunted Manor did not return to the Warsaw stage until two years after Moniuszko’s death. This time, the Russian censor took a hard line with the libretto and the score. The opera travelled in an equally mutilated version to theatres in the Austrian and Prussian partitions. It only enjoyed a true renaissance after Poland regained its independence. And it still makes us laugh, it still grips us, although the night is somehow not so dark.