A true master of opera can compose not only a masterpiece for the stage but also his own biography. Giuseppe Verdi reached the absolute top in both respects. In the so-called Autobiographical Sketch, dictated to Giulio Ricordi of the Casa Ricordi in 1879, he stuck firmly to the rule he had formulated several years earlier in a letter to the Italian patriot Clara Maffei: “To copy the truth can be a good thing, but to invent the truth is much, much better.” Verdi was right. He published his memoirs having in mind the new, united nation – not to have the Italians believe everything, but to lay the foundations for a national legend that would sustain their identity, which was only beginning to take shape at the time. Verdi manipulated the facts, because society clearly expected it. His contemporaries knew what the truth was. Later scholars studying the composer’s oeuvre were taken in by this dramatic tale full of pathos and for years treated it as revealed truth. In fact, there was as much historical truth in it as in the libretto of Nabucco, a four-act opera about King Nebuchadnezzar and the beginnings of the Babylonian captivity of the Jews. 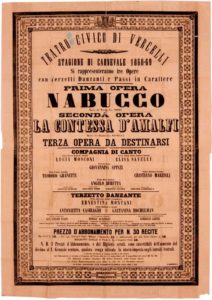 Indeed, towards the end of the 1830s Verdi was struck by a whole series of calamities, which were, however, spread over time a bit more than the Sketch would suggest. Both children from the composer’s first marriage did not live long beyond their infancy. Virginia Maria Luigia died in August 1838, at the age of sixteen months, while Icilio Romano, one year her junior, lived only fifteen months. Their mother, 26-year-old Margherita, died in early 1840, killed by a sudden attack of encephalitis. At that time Verdi was working on his second opera, with which he hoped to continue the success of Oberto, very warmly received at its premiere at Milan’s La Scala in November 1839. The failure of Un giorno di regno, staged at the same theatre less than a year later, was a result not so much of the complications in the composer’s private life but of his misdiagnosis of the audience’s expectations. Verdi composed a work that was by no means inferior to Oberto but its outmoded style of opera buffa determined the audience’s reaction. Verdi may have had doubts about his skill, but he most certainly did not swear that he would never compose an opera again. Just as unbelievable is his declaration that he changed his mind shortly after Bartolomeo Merelli, the La Scala impresario, forced him to accept the libretto of Nabucco.  In fact, Verdi had no intention of giving up the art of composition and after the death of his wife he painstakingly revised the score of Oberto – thinking about upcoming productions in Turin, Naples and Genoa.

However, it must be said that the later version of the events does speak to the imagination very strongly. Let us leave aside the description of the increasing fury which apparently accompanied him as he was returning home with the unwanted libretto. Furious, Verdi locked the door, threw the manuscript on the table and the manuscript opened itself – of course on the song of the Hebrew exiles from Act II. Seeing the words “Va, pensiero, sull’ ali dorate” (Fly, thought, on wings of gold) the composer melted. He became completely engrossed in the libretto. He tried to sleep but kept waking up and reading the text again and again. Before dawn he knew the whole libretto by heart. A magnificent founding myth, making it possible to draw an analogy between the oppression of the Jews in the Babylonian captivity and the situation on the Italian Peninsula.  Never mind that the Spring of Nations did not break out until eight years later and that the Unification of Italy did not begin in earnest until 1859 and lasted over a decade.

The legend was going strong as were the fabricated legends of the Chorus of the Hebrew Slaves being encored during the premiere of Nabucco in March 1942 (yes, there was an encore, but of the final hymn “Immenso Jehova”), of huge demonstrations following successive performances of the opera and of a ban, introduced by the Austrian authorities, on staging the opera within the territories they occupied (Nabucco was performed after the collapse of the Spring of Nations, as were Ernani and Attila, two other operas by Verdi which with time became part of the Risorgimento narrative). The legend was cultivated for a long time and effectively at that. It was used for political purposes. In 1941, after Italy’s military failures, Mussolini blew it up during the celebrations of the fortieth anniversary of Verdi’s death, trying to rekindle the nation’s fading enthusiasm. The separatists from the Northern League, established in 1989, appropriated “Va, pensiero” as the anthem of the independent state of their dreams, Padania – obviously, with an appropriately “corrected” text. 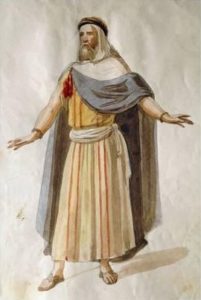 Filippo Peroni, costume sketch for the role of the old member of the chorus, 1854.

Does this mean that Nabucco is worth little, that it is another early opera by Verdi, whose creative genius was revealed in its full glory only in the early 1850s with the famous “trilogy of feelings” comprising Rigoletto, Trovatore and Traviata? What does the audience’s rapture after the premiere matter, if the critics had mixed feelings about Nabucco? The problem is that a majority of the scathing opinions came from critics associated with the German composer Otto Nicolai, who had made an unforgivable mistake of rejecting the libretto, written especially for him by Temistocle Solera. Instead, Nicolai began to work on the opera Il proscritto to a libretto by Gaetano Rossi, rejected by… Verdi. This time intuition did not fail the Italian composer: the premiere of Il proscritto at La Scala, less than a year before the premiere of Nabucco, was a complete flop. After the triumph of Verdi’s opera Nicolai lost his nerve. He called his rival a fool with the heart of a donkey, who could not even score decently, while his work was invective, an affront to the dignity of this musical form.

Fortunately, Nicolai’s opinion was that of a minority. With hindsight we can say that Nabucco was the first clear manifestation of “direct” musical narrative in Verdi’s oeuvre. Although stylistically still close to Rossini’s aesthetics, the opera emphatically marks the moment in which the composer decided to gradually abandon the traditional “number” opera in favour of a lively, dramatically coherent story. For the moment the composer pursued this goal still using simple means, focusing primarily on making the action “move forward” (which was one of the reasons why he warned the conductors of Nabucco against differentiating the tempi too much). His unerring sense of musical time prompted him to expand the role of the chorus, which in the opera is a fully-fledged protagonist of the drama, a collective embodiment of the people of Israel. An excellent example of this composing strategy is “Va, pensiero” with its lyrics loosely drawing on Psalm 137 and melody quite disarming in its simplicity and sung largely in unison. Rossini was spot-on in describing it as a “grand aria for sopranos, altos, tenors and basses”. Whenever multiple voice harmony appears in this aria, its form is one characteristic of Italian folk music – voices running in parallel thirds. 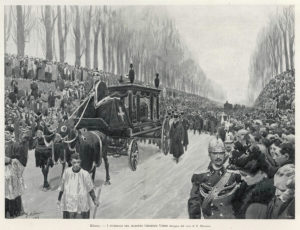 In addition, Verdi introduced important innovations in the arrangement of solo parts. The eponymous role of Nabucco, a man torn internally and gradually losing his mind, heralds the great baritone parts of Verdi’s later operas, including Rigoletto and Simon Boccanegra. The most important counterbalance to the main protagonist is the high priest Zaccaria, vocally a direct descendant of Rossini’s Moses – the composer gave him an incredibly complex bass part with two culminations: in the powerful prayer from Act II and the inspired prophecy following the Chorus of the Hebrew Slaves. The lovers – tenor Ismaele and mezzo-soprano Fenena – are deliberately pushed to the background, against the initial suggestions of the librettist, who provided for a great love duet in Act III of the opera. When it comes to the usurper Abigaille, Verdi gave her a difficult and thankless part: the prima donna has just one aria, but throughout the opera she has to cope with huge interval leaps, finely embellished coloratura and a number of notes requiring a powerful and free sound both in the upper and the contralto-like lower register, going beyond the tessitura of an “ordinary” dramatic soprano.

With hindsight we can say that Nabucco was not only Verdi’s first opera in which the composer revealed his individuality. It was also a foundation stone for his true creative genius, a starting point for the famous eight “galley years”, during which he composed no fewer than fourteen operas, mostly groundbreaking and rightly regarded as masterpieces of the form to this day. In a non-musical context Nabucco became a symbol of Risorgimento – also thanks to the composer, who skilfully weaved the story of the work into the complicated history of the unification of Italy. So skilfully, in fact, that after his death in 1901, when the funeral cortège was passing through the streets of Milan, the passers-by would spontaneously burst into “Va, pensiero”. A month later, when the bodies of Verdi and his wife Giuseppina Strepponi, the first Abigaille, who had died in 1897, were solemnly transferred to a tomb in Casa di Riposo per Musicisti, the Chorus of the Hebrew Slaves was sung by a chorus of nearly nine hundred conducted by young Arturo Toscanini.

The legend of Nabucco is still flying on wings of gold. It survived two turns of the centuries and continues to demonstrate the effectiveness of opera in uniting a community.  On the other hand, it would sometimes settle on a wrong hill. It is worth bearing this in mind in order to avoid following Il Duce’s example and turning this masterpiece into a tool of unthinking and dangerous propaganda.