God created the world and concluded that every thing he had made was very good. Similar conclusions must have been drawn by Haydn after the first performance of his Creation, on 30 April 1798, before a private audience at the now non-existent winter palace of the Schwarzenberg princes in Vienna’s Neuer Markt. Outside policemen and armed guards disciplined a teeming crowd of onlookers. Inside was gathered Europe’s the crème de la crème of the period: wealthy patrons, members of aristocratic families, representatives of the music world, high-ranking courtiers and diplomats. The composer himself conducted. The enthralled guests listened in mute admiration and total concentration. Haydn shuddered and sweated alternately; as he later confessed, several times he came close to apoplexy from the whole excess of sensations. At the official premiere, which took place on 19 March 1799 at the Burgtheater, the audience was not able to control its emotions. Hearing the line “Und es ward Licht”, people jumped from their seats and made such a din that the performance had to be stopped. The rhetorical effect intended by Haydn was all the stronger given that the line was sung by a sixty-strong chorus supported by an ensemble of over one hundred and twenty instrumentalists.

Today’s listeners usually know what to expect after the famous orchestral prelude. Haydn depicts in it chaos and the clumsily forming universe with its centre everywhere and surface nowhere, as Blaise Pascal would have it. Using the initial unison on the note C, descending under a fermata from forte to piano, the composer paints an abyss beyond time: unmelodious, devoid of harmony, free from any dissonance. A measure of the quality of contemporary performances of The Creation lies in the ability to focus the listeners’ attention already on that first sound – a musical image of a vacuum which Haydn gradually begins to fill, at first only with a sequence of deceptive harmonic progressions and isolated shreds of melody leading nowhere. 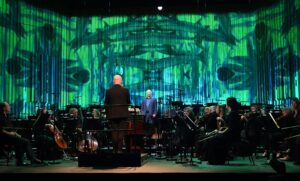 I imagine that the audience at the Barbican Hall, where The Creation was performed – with the English libretto – by the Academy of Ancient Music on 28 September, awaited that beginning with unprecedented impatience. It would be hard to find a better work to inaugurate the ensemble’s first season under the direction of its new boss. At the same time it would be hard to find a piece that would plant an equally ripe seed of optimism in the hearts of listeners after the longest lockdown in Europe. It could be said that Laurence Cummings, who took over the AAM after ten excellent seasons in charge of the Göttingen Handel Festival, held all the aces. If so, he had used them to the full. From the first note of the prelude to the final chorus “Sing the Lord, ye voices all” he infected the musicians with his unbridled joy of singing and playing, losing none of phrasing precision or colour sensitivity, and making sure to highlight the often powerful rhetorical gestures. Striving for the fullness of sound desired by Haydn, Cummings also made the right and historically justified decision to perform the continuo part not on a harpsichord, but on an 1801 English Broadwood piano. The unique design of the instrument ensured stable tuning, reliable action and much greater power of the sound – qualities once appreciated by Haydn and now skilfully emphasised by Alastair Ross, who performed the continuo.

Cummings was just as sensitive and tasteful when selecting his cast of soloists. For dramaturgical reasons (The Creation was presented in a semi-staged version featuring Nina Dunn’s projections that contributed little to the plot but were altogether quite neutral) he decided not to combine bass and soprano parts, entrusting the roles of the archangels and the first humans to five singers. Gabriel was sung by Mary Bevan, a singer with secure intonation, skilfully playing with the timbre of her dark soprano, which has slightly too much vibrato perhaps. However, I was much more impressed by the Eve of Rachel Redmond – an excellent actress with a radiant voice soft as silk, a voice she wields with childlike ease. She was beautifully partnered by Ashley Riches, as a movingly ungainly Adam, a singer with a golden and ringing bass-baritone. Stuart Jackson in the tenor role of Uriel impressed not only with the passion of his interpretation, but also with an extraordinary sensitivity to the text. Yet the show was stolen by Matthew Brook (Raphael), a legend of historical performance and an ever reliable singer with such a powerful comic talent that I still giggle at the memory of the phrase “In long dimension creeps with sinuous trace the worm”, the interpretation of which should go down in the annals of English pantomime. 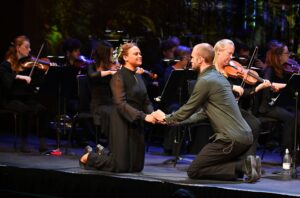 Haydn used to say that in moments of doubt he heard his inner voice whispering that his works would one day prove a source of comfort to those weary of life’s labours. Judging by the reaction of the listeners in London, he was right. There was light again. Also thanks to Cummings, whose incurable optimism will certainly mark the Academy of Ancient Music’s future ventures.