Even if Offenbach had not seen Jules Barbier and Michel Carré’s Les contes fantastiques d’Hoffmann on stage – which is unlikely, as Parisians flocked to the Théâtre de l’Odéon after the successful premiere of the play in 1851 – he certainly must have heard about it. The idea for a loose adaptation of E. T. A. Hoffmann’s three short stories (The Sandman; Councillor Krespel; and A New Year’s Eve Adventure) came from both authors. Barbier’s brilliant intuition told him to introduce Hoffmann himself into the narrative and make him the main protagonist of this kaleidoscopic tale of love and other demons. More than a decade later the play was adapted into a libretto for an opera which was to have been composed by Héctor Salomon. It was not until a few years after the Franco-Prussian War that Offenbach showed some serious interest in the text, when he had to rebuild his Parisian career basically from scratch. The libretto was entrusted to Barbier alone – Carré had died prematurely in 1872. Had it not been for some unlucky coincidences, it is possible that Offenbach would have immediately got down to work and presented his “true” opera in the 1877/78 season, as originally planned.

Yet it was only in that season that he began composing in earnest. A successful trip to the United States had brought him considerable financial benefits, thanks to which he was finally able to pay off his debts and return to abandoned scores. Unfortunately, the gout he had contracted during the years of prosperity was increasingly robbing him of his strength. As he was writing The Tales of Hoffmann, Offenbach knew he was dying. He would wake up at night so tormented by his illness that even the slightest touch of the sheets gave him unbearable pain. During the day he sought solace in conversations with his dog – a creature presumably ugly and dwarfish in stature, since he named him after Kleinzach, the dwarf from the song in the opera’s prologue. Apparently he confessed to the dog that he would have given everything to live to see the premiere of his work. He fell four months short. The Tales of Hoffmann, with an orchestration and recitatives by Ernest Guiraud, cut and reassembled by Léon Carvalho, the then director of the Opéra-Comique, found its way onto the stage in February 1881 and was an instant triumph. Today it is Offenbach’s most frequently produced work and, at the same time, a work that still remains open, virtually impossible to reconstruct in line with the composer’s intention despite the musicological discoveries of past decades.

In recent seasons The Tales has been performed usually in the version edited jointly by Michael Kaye and Jean-Christophe Keck, the most dramaturgically coherent to date. And it is in this version that the opera had its most recent premiere at the Göteborgsoperan, in a staging co-produced with the Saarländisches Staatstheater Saarbrücken, conducted by Sébastien Rouland and directed by Krystian Lada. The set was designed by Marian Nketiah, a graduate of the Faculty of Architecture, Technische Universität Berlin; the costumes by Bente Rolandsdotter, whose designs I have already praised in my review of Il ritorno d’Ulisse in Basel; and the lighting design, extremely important in this production, was done by Aleksandr Prowaliński, a member of the Polish director’s team during the production of Daniel Catán’s opera Florencia en el Amazonas at the Theater St. Gallen. 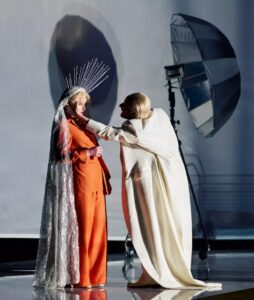 While entrusting the four main female roles in The Tales to one singer (as Offenbach intended) is becoming the prevailing practice at most opera houses, the idea of casting three singers in the role of Hoffmann has so far occurred probably only to Barrie Kosky in his 2015 Berlin production. However, Kosky created his production with different means and for a completely different purpose than Krystian Lada, who decided on a similar manoeuvre in Gothenburg. In Lada’s production the main protagonist is a middle-aged Hoffmann – a poet, writer, artist experiencing a violent crisis after parting with the woman of his life. Locked within the four walls of his miserably deserted flat, he drinks himself into a stupor, despairs and struggles with a series of hallucinatory images in which he – and his beloved Stella – appear as characters from the past, protagonists of quite recent events and prefigurations of individuals they may become in the future. In this half Faustian, half Freudian journey into the depths of his own psyche Hoffmann is accompanied by numerous secondary and two major figures: of true love, requiring sacrifice, but leading to true freedom – represented by the Muse identified with Niklaus (also in keeping with the composer’s intention to some extent) – and by four incarnations of the Mephistophelean force: “part of the Darkness which brought forth the Light”. In such an interpretation The Tales of Hoffmann is not just a description of three stages from a man’s life, but also a story of maturation: a fantastic tale of an increasingly wise prince who slowly realises how much harm he did to princesses, who harmed him as well. A man who has to face his own ego, to confront four demons that “constantly contradict” and put him to the test, to understand that sometimes you have to stop existing in order to become human again – not just a poet.

In the Swedish production Hoffmann observes himself from the outside, argues with himself, impersonates himself from the past and himself imagined at the end of his life. That is why, although the “middle” Hoffmann is at the forefront in the production, the protagonist often speaks in the voices of the other two incarnations and sometimes even sings along with them. In addition, he identifies with the mocked Kleinzach (hence the idea of having his ballad accompanied by a harrowing pantomime with the young Hoffman being bullied by his peers) and sees a facet of his personality in the characters he has hitherto blamed for his misfortune (an excellent idea to cast the role of Spalanzani with the same singer who sings the old Hoffmann). 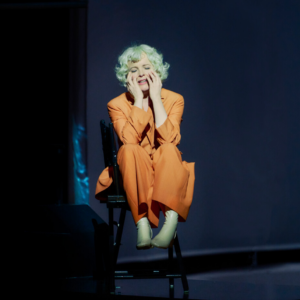 Such an interpretation, uncannily in keeping with the intentions of the opera’s creators, requires huge precision and consistency from all members of the creative team. This was successfully accomplished in Gothenburg, which is all the more admirable given that The Tales of Hoffmann is problematic for virtually everyone involved in producing this masterpiece, and given that in the case of Krystian Lada was the first project on such a scale since his memorable Nabucco at the Wrocław Opera. Lada used a very wide range of theatrical means, including projections of pre-recorded films and rather intensive use of the revolving stage. Admittedly, in the Prologue I felt rather overwhelmed by this profusion: fortunately, wandering through the maze of archetypes and symbols was made easier by Bente Rolandsdotter and her “talking” costumes, seemingly surreal, but in fact helping me to understand who was who in a world of brightly painted sensitive souls on the one hand, and grotesque brutes squeezed into bondage harnesses on the other. The Olympia Act – instead of being presented in Paris – “stopped” in the bourgeois Nuremberg, among sets phenomenally arranged by Nketiah and taken as if straight from Die Meistersinger. The Antonia Act, originally intended to take place in Munich, unfolded in an extremely intimate space shaped by light and gesture, bringing to mind any place in Europe where people are harmed behind the closed doors of wealthy houses. The Giulietta Act pulsated with the sparkle of the diamond from Dapertutto’s aria and the relentless rhythm of games at a Venetian casino. Nothing was modern here and nothing was from the period. Hoffman was drinking himself to death in a dressing gown that looked like a pathetic memory of the flowery shirt from his youth. The terrified and very much alive Olympia – looking as if taken straight from a folk painting of the Madonna – brought to mind the words of Kleist, who claimed that perfect grace could be an attribute of either a mechanical puppet or God himself. The stunningly voluptuous curves of the Muse evoked the archetype of the eternal feminine – in a reference not only to Jung, but also to Słowacki and his childhood dream determining our entire adult life. The concept of Lindorf/Coppelius/Miracle/Dapertutto’s fluid identity fitted aptly with the idea of multiplicity of evil present in us.

There are a few Polish tropes in this production, including Olympia shown as a victim of a violent, religiously obsessed society that tries to force the woman into the role of a submissive, mindless doll. There are several études devised as a tribute to Offenbach, who wanted the audience to burst out laughing in relief, unable to bear the excess of emotions contained in the work. There are several memorable scenes: the departure of Olympia, the symbolic death of Antonia, the moment in which the old Hoffmann realises that, having killed Schlemil, he in fact has killed himself. 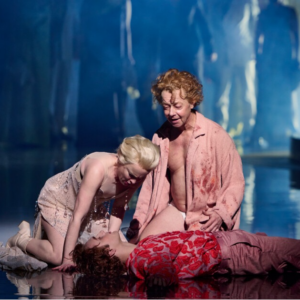 Lada’s concept found excellent performers in the singers, especially in Kerstin Avemo, a phenomenal actress with a soprano that is not large but very agile, with Avemo skilfully balancing it within the styles which Offenbach made the subject of his provocative play with convention. Among the production’s three Hoffmanns Joachim Bäckström had the most work to do. His is a typical jugendlicher Heldentenor, beautiful in colour, although still insufficiently nuanced for this difficult role. The American lyric tenor Brian Michael Moore did well as the young Hoffmann, but I have to say that of the three incarnations of the protagonist I was impressed the most by Tomas Lind – a Hoffmann who was as convincing vocally as he was as a character, and who maked an impression on the heart and the ear as the most believable personification of an artist going through an age crisis, and, at the same time, an example of the enduring beauty of a well-managed and wisely nurtured voice. During the 9 December performance the undisposed Katarina Karnéus (Muse/Niklaus) found a worthy replacement in Ann-Kristin Jones singing from the wings. The quadruple role of Lindorf/Coppelius/Miracle/Dapertutto was entrusted to Andrew Foster-Williams, who confirmed his class not only as an excellent performer of roles written for a uniquely “French” bass voice, but also as a fine actor with an exceptional sense of humour. The artist deserving special mention among those singing the character roles was Daniel Ralphsson (Andrès/Cochenille/Frantz/Pitichinaccio), especially for his hilarious interpretation of “Jour et nuit je mets en quarte”, proof of the musical deafness of the servant Frantz, portrayed in this production as a seemingly ordinary technician, hanging around on stage from the beginning of the performance.

The entire performance was conducted with extraordinary verve and a sense of style by Sébastien Rouland, an artist known also to Polish music lovers, a pupil of Marc Minkowski and conductor of Offenbach’s La vie parisienne in a version prepared under his direction at the Opéra National de Lyon and released on DVD by Virgin Classics. “What emerges from this mirror,” to quote the ending of E. T. A. Hoffmann’s A New Year’s Eve Adventure? Well, the point that from the beginning a co-production should be treated as a coherent artistic vision, followed under the baton of a knowledgeable conductor, with singers aware of their duties, and with a director who knows how to read a score. Yet in Poland this does not seem to work somehow. I am waiting for the end of the story of the lost reflection – which will finally be transformed into a new beginning thanks to a devoted creative team.